Australians now rank financial worries brought about by the soaring cost of living as their number one financial concern, and with more than 40 per cent of respondents having no savings buffer they are right to be nervous.

By Craig Francis
| 31-7-2022 | Finance | 4 min read
The dream of home ownership is slipping from the grasp, and aspiration, of many Australians.

Australians now rank financial worries brought about by the skyrocketing cost of living as their number one concern.

While half say they will have significant challenges meeting their expenses and debt repayments this year, only 12 per cent identified saving for a home as their number one financial focus.

The disturbing findings are drawn from two major surveys that looked into the financial plight, plans and priorities of households around the country.

With inflation showing no signs of slowing after a 6.1 per cent increase in the June quarter, research reveals that the rising cost of living ranks number one for financial worries among Australians, with 61 per cent identifying it as their top concern.

A survey of an independent panel of 1018 Australian mortgagors was commissioned by finance platform, Money.com.au.

Having a financial buffer in case of an emergency ranked second on the list – chosen by 43 per cent of mortgagers.

With inflation complementing interest rates on a runaway splurge, the dream of home ownership is fading for many Australians.

A separate survey of more than 2,000 people carried out by superannuation company Equip revealed that growing their savings was the top financial priority for one in five Australians (22 per cent), closely followed by covering living costs (19 per cent).

Both were rated well ahead of saving for a home as priorities (12 per cent).

The stretch on household finances is translating into borrowers sifting through the rubble for signs of a better deal.

Director of Better Choice Mortgage Services, Sebastian Scurria, said that while broker clients have been very proactive about seeking interest rate discounts, this line of enquiry has ramped up considerably since the RBA embarked upon its rate hike cycle.

“In 2022 borrowers are far less tolerant to interest rate increases and this can be attributable to the cost of living pressures from other goods and services and that the pace of salary increases hasn’t kept up with the pace of real estate price rises,” Mr Scurria said.

“Depending upon which economist you listen to, the cash rate is going to land at somewhere between 2.65 per cent to 3 per cent, therefore, variable rates are going to increase at least another 1.5 per cent, so based upon these predictions an owner-occupier variable rate will increase to around 4.75 to 5.5 per cent.

“It will be interesting to see the effect this has on borrowers nationally, but especially in Victoria and NSW where the median house price is north of $1 million.”

Mr Scurria said the fixed rate boat sailed away in the second half of 2021.

“What most of the public don’t understand is that home lending fixed rates have been increasing for at least 12 months.

“Up until July 2021, fixed rates of under 2 per cent were being subsidised by the Federal Government as part of the pandemic stimulus package.

“While we go to great lengths to explain to clients that RBA rate movements effect variable rates in the main, they will often ask what the fixed rates of the day are but are more than a little surprised when we tell them fixed rates have been moving up for almost 12 months and are considerably more expensive than variable rates and more than double what they were 12 months ago.”

Helen Baker, licensed financial adviser and spokesperson for Money.com.au, said it was surprising to learn that mortgage repayments are not as big a concern across the board as rising prices but offered some potential factors.

“Firstly, the finding suggests that many mortgagors are likely to have built a buffer in their offset accounts or on their loans to weather rate rises – even though 43 per cent of respondents didn’t have a separate buffer for other emergencies.

“Secondly, I believe mortgagors have some faith that institutions such as the RBA won’t raise rates to a level that will create a crisis among a large proportion of borrowers, and potentially a housing market crash.

“Thirdly, some borrowers don’t monitor financial news or may not be as financially savvy as others, might not be well versed on the ins and outs of their home loan, and may not understand that in an environment of high interest rates they may not be able to meet repayments.

“However, rate increases will create distress for a significant minority, with more than a quarter (27 per cent) of borrowers in our survey indicating they are very worried.”

There’s no point pretending these rate rises don’t hurt – they do and they will.

They have every reason to be concerned.

Federal Treasurer Jim Chalmers economic statement to parliament would send a shiver down the spine of the 43 per cent of respondents who said they had no financial buffer.

Inflation is now expected to peak at 7.75 per cent in the year to December. It will still be at 5.5 per cent by mid next year, on the new estimates.

“A lot of people are living pay cheque to pay cheque for whom this inflation will be devastating because it's getting harder and harder for them to substitute things out of their household budgets,” he told a news conference.

He later added: “There’s no point pretending these rate rises don’t hurt – they do and they will.”

And anyone with thoughts of saving for a house deposit who thinks otherwise may be dreaming. 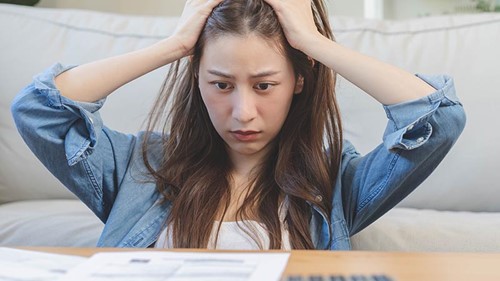