Australians are unhappy with the Reserve Bank for raising interest rates so quickly but it hasn't stopped first-home buyers, investors or owner-occupiers from borrowing and building.

By API Journalist
| 4-7-2022 | Finance | 6 min read
The value of new loans has increased but consumer sentiment remains a concern.

Australians are grumpy at the Reserve Bank (RBA) for raising interest rates so fast but that isn’t deterring them from borrowing.

A new Canstar survey of 1,001 Australian home loan borrowers and savers shows less than two-fifths (39 per cent) support the Reserve Bank’s decision to lift interest rates as hard and fast as it has in recent months, compared to 37 per cent who feel interest rates should not be rising so rapidly and a further 25 per cent who are unsure.

Despite the reticence around rate hikes, the latest Australian Bureau of Statistic (ABS) lending figures show the value of new housing loan and investment loan commitments rose over May 2022, including to new loan commitments to first-home buyers, home owners and investors.

The value of new owner-occupier housing loan commitments increased to 2.1 per cent, contributing 82 per cent of the rise in total lending, while investment loan commitments rose 0.9 per cent.

First home buyers remain 6.9 per cent higher than February 2020 levels before the onset of the COVID-19 pandemic.

Real Estate Institute of Australia (REIA) President, Mr Hayden Groves, said the number of new loan commitments to first-home buyers grew by 2.3 per cent in May 2022 but was 31.6 per cent lower compared to the same time last year when first home buyer stimulus packages remained in place.

Mr Groves said that even though the value of loans has increased, consumer sentiment was a concern as inflation and further interest rates rises continue to rise.

CoreLogic notes that home sales nationally through the June quarter were 15.9 per cent lower than a year ago but are still holding 13.0 per cent above the previous five-year average.

National advertised stock levels remain 7.4 per cent lower relative to 2021, in Sydney and Melbourne, where housing conditions are the weakest, total advertised supply is now 7-8 per cent above the levels recorded a year ago and well above the five-year average.

In Adelaide, where housing conditions remain strong, advertised stock levels are still 16.9 per cent lower than last year and almost 40 per cent below the five-year average.

“It is not all bad news on the supply front where Hobart has seen advertised stock levels jump 48.4 per cent higher relative to last year and inventory is 20.7 per cent higher in Canberra,” Mr Groves said.

He said the rise in advertised supply across some markets is mostly due to a slowdown in the rate of absorption.

“Estimated transactions in Sydney throughout the June quarter were 36.7 per cent lower than a year ago while Melbourne is down 18.3 per cent.”

The Australian Bureau of Statistics on Monday (4 July) released data on building approvals and lending to households and businesses for May 2022.

“Activity in 2022 shows the rate of new home building and renovation activity remains strong, which will assist in delaying the adverse impact of rising interest rates on building activity, and therefore on the wider economy.

“Encouragingly, investor activity continues to grow - the value of loans to investors in the three months to May 2022 was 36.2 per cent higher than the same three months in 2021.

“This points to more supply of rental homes in the future, which will help alleviate the severe rental shortage being experienced around Australia,” concluded Mr Ward.

There were 1,864 homes taken to auction across the combined capital cities this week, down from 2,364 over the previous week and 2,168 this time last year.

Of the 1,453 results collected, 55.0 per cent were successful, the lowest preliminary clearance rate recorded since late April 2020.

While property prices are declining in Sydney, Melbourne and Hobart, buyers are still pushing prices up in Adelaide, Perth and Brisbane.

The struggle to balance the household budget is weighing heavily on Australians and undermining support for the rapid pace of interest rate increases.

Canstar’s finance expert, Steve Mickenbecker, said home loan borrowers hit by rising interest rates are naturally more opposed to the increases than the general community, with 46 percent of mortgage holders against rapid rate rises compared to just 24 percent of people who own their home outright.

“Conversely many Baby Boomers who are likely to be living at least partially on interest earnings and struggling with inflation on a fixed income, tip to the positive side with 46 percent of those in their sixties supporting the fast pace and succession of rate rises.

“The gap between borrowers opposing the pace of rate rises compared with savers supporting it, is clear.

“Self-interest drives both positions but there is still a considerable proportion of savers who are against the pace of interest rate increases and must be taking a broader view of the state of the economy and prospects for the future,” Mr Mickenbecker said.

Survey findings: In your opinion, should the Reserve Bank of Australia be increasing interest rates as hard and fast as they have recently?

Source: www.canstar.com.au, Survey of 1,001 Australians aged 18+. Commissioned by Canstar and conducted online via Qualtrics in June 2022. *Responses are tick all that apply so may not add up to 100.

Regardless of whether they’re in favour of rapid cash rate rises or not, many Australians are already feeling the squeeze financially, with Canstar’s survey showing 41 per cent either won’t or don’t know if they will be able to pay at least one of their current bills or loan repayments in full in the next six months.

The top three ways these Australians are planning to overcome this financial shortfall are paying a partial amount of their bill or loan repayment (46 per cent), borrowing money from family or friends (27 per cent) or using a credit card (22 per cent).

It is yet to be seen if the one in five who plan to run up their credit card debt will be able to get on top of it when wage rises finally start to catch up, as the Reserve Bank expects.

If the outlook for wage rises is too far off, the increase in living expenses and loan repayments will hit a crisis level, in particular for recent borrowers.

“During the last two years, Australians knocked $8 billion off credit card debt, a large portion coming from the early release from their superannuation,” Mr Mickenbecker said.

“That one-off opportunity will have been wasted for many if they have to live off their credit card now.” 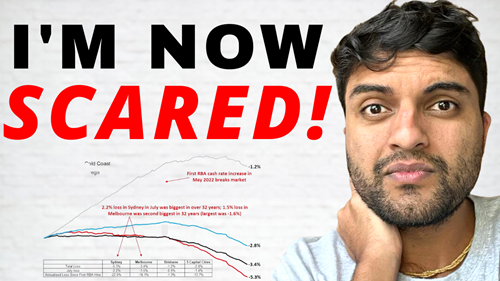