9 min read
2-12-2021
While price growth in other capital cities is starting to slow, home values continue on to accelerate in Brisbane. Photo: Shutterstock

And there are few surprises as to why this has happ…

And there are few surprises as to why this has happened.

Housing affordability is less pressing in Brisbane, and we have had fewer lockdowns due to COVID-19.  Additionally, we have continued to see a positive rate of migration, especially from those moving interstate.  This continues to fuel the housing demand throughout the city.

Listing volumes are also a lot lower in Brisbane with 33.9 per cent fewer properties available for sale in the 4 weeks up to November 28, compared with the five-year average.

These differences in supply dynamics are certainly playing a part in the upward price growth momentum in Brisbane.

With the stimulus from the federal government boosting construction, new builds in fresh estates are thriving, but this is having little impact on the low supply levels of established properties in locations where there is a scarcity of land and high demand.

These are the locations where we are seeing maximum price growth.

A number of predictions have been made in relation to the direction of the Brisbane market both next year and into 2023.

According to some of the big banks and also SQM Research, the outlook for 2022 looks positive, regardless of the projected scenario.

Looking further ahead towards 2023, the predictions for Brisbane property values range from price falls of 1 per cent(Westpac) to price falls of 8 per cent (Commonwealth Bank).

Obviously as we look further into the future, the assumptions are also less reliable.

Therefore, we prefer to report on the outlook once we have more certainty about when there will be any potential increase in interest rates as well as other impacts that could influence the demand for property such as changes to credit policies and the economic recovery as a whole.

Tighter credit conditions came into effect this month, with new applications for finance now being assessed with an interest rate buffer of 3 per cent above the current mortgage rates, which is an increase of 0.5 per cent from where it was prior.  We are yet to see any impact associated with this change throughout Brisbane.

There is definitely no slowdown in the demand for property in Brisbane at this time.

Sales volumes were 51.5 per cent higher in the 12 months up to October 2021 compared to the same period last year.

There is a high volume of property transactions occurring, which is evidence of the confidence that buyers have in the Brisbane market.

There has been a shift in the composition of buyers recently with lending data now showing that first home buyers have dropped to 26.9 per cent of all loan commitments.

Instead, we are seeing an uplift in investment buyers with investors now making up 32.8 per cent of all lending commitments across Queensland.

Whilst fixed interest rates have started to climb, the Reserve Bank has been clear that a number of conditions need to be met before the official cash rate does increase.

Specifically, they have confirmed that the inflation rate needs to be sustained within the 2-3 per cent range before any changes will be made.

The latest inflation figures showed a rebound in the last quarter, although the factors contributing to this result (ie: higher commodity prices and supply chain issues) may be mitigated over time.

Additionally, with international borders reopening, wages growth may be suppressed, another factor that may delay any sustainable change to inflation.

Time will tell, but when the official cash rate does start to rise (and it will at some point) then it is likely that the rate of any increases will be gradual so that any impacts on the economy can be assessed.

With the vaccine roll-out in place, we also now find ourselves in a position where international migration will again be possible.  This will add further ongoing demand to housing markets.

The latest Hedonic Home Value Index data by Corelogic showed the median dwelling value in Brisbane increased by 2.9 per cent over the month of November.

This price growth is a further 0.56 per cent growth compared to what was observed in Brisbane last month, which is evidence that in Brisbane, the momentum of price growth continues to accelerate.

The current median value for dwellings across Greater Brisbane is $662,199 which is $20,102 higher than just one month ago.

The quarterly growth in dwelling values across Greater Brisbane is now up 7.4 per cent.  Annual growth for the last 12 months for Brisbane Dwellings is now 25.4 per cent.

Brisbane’s higher value properties are still driving the growth as you can see in the CoreLogic Data below.

All segments of the Brisbane market are in a strong growth phase right now, but the top end of the market is growing at the fastest pace.

The Brisbane housing market is on fire!  We saw median values for the greater Brisbane region increase 3.2 per cent in just one months throughout November, up from 2.8 per cent growth throughout October.

This is a new record high for monthly growth figures recorded for Brisbane in the current property boom.  The 12-month change in Brisbane house prices has been 27.9 per cent

The current median value for a house in Greater Brisbane is now $757,194, the highest it has ever been.  This is $25,802 MORE than one month ago!  Every month this seems to keep growing and growing.

The Unit Market in Brisbane retracted slightly again in its rate of growth throughout November 2021.

The graph below charts the percentage change in property values for houses and units since January 2020 across Greater Brisbane.

It is obvious that the housing sector is continuing to outperform the unit sector in Brisbane on a month-to-month basis.

This has been a trend observed since October 2020 and has become especially apparent in the last 2 months where we can clearly observe a divergence in the rate of growth in the different property types.

Below we have charted the actual median value changes for houses and units across Greater Brisbane since January 2021. 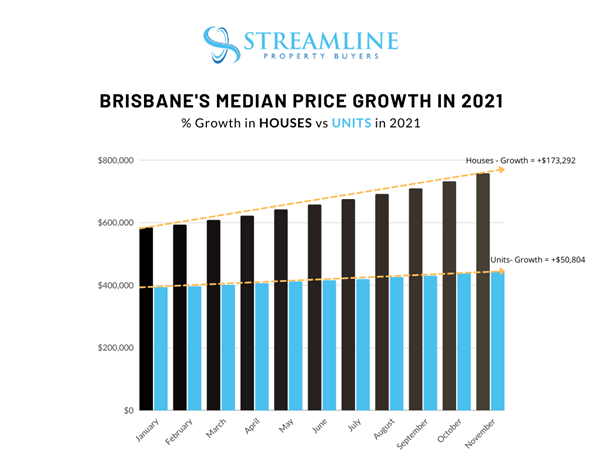 Vacancy Rates at a city-wide level in Brisbane remained stable between September and October, at 1.4 per cent. The table below highlights where vacancy rates across Brisbane sit at the end of October 2021.

Vacancy remained relatively unchanged this month across every sub-region throughout Greater Brisbane.  These tight vacancy rates are continuing to put upward pressure on rents throughout the city.

Housing rents have demonstrated annual growth in Brisbane of 11.7 per cent according to Corelogic Data, which is up a further 0.4 per cent compared to one month ago.

Rental incomes in the unit market throughout Brisbane have seen an annual increase of 6.8 per cent and were up 0.3 per cent, compared to last month.

Gross rental yields for dwellings across all of Greater Brisbane according to CoreLogic slipped slightly lower this month due to property values rising faster than rents.

As at the end of November, the gross yield in Brisbane is 3.8 per cent , down 0.1 per cent compared to October.

What did we see on the ground across Brisbane during November 2021?

In the first couple of weeks of November, our team noticed a huge jump in the prices that some buyers were prepared to pay for properties.  This eased a little towards the latter part of the month.

Perhaps some buyers made a last-ditch effort to throw everything on the table, fatigued from missing out several times throughout the year, in an attempt to move into a new home before Christmas?

Whatever the reason, buyers were stretching to buy.  We often thought that there would be valuation risk with some prices that were being achieved.

But for many buyers who have stronger equity positions, or additional cash, a valuation shortfall is less problematic.

Of course prices achieved are now the new baseline for property values in Brisbane so as the market moves aggressively upwards, we have to readjust our expectations for what a specific budget will buy.

Open homes are still well attended, although the number of groups viewing properties has been declining compared to a few months prior.  The actual demand is quite property specific, with multiple offers still being achieved for most private treaty sales.

Auctions that we attended throughout the month were also very well attended with a strong number of registered bidders competing for quality properties.

As we head into the festive season we do expect the number of active buyers to reduce as people focus more on Christmas shopping rather than property shopping.

At the same time, we also expect that the number of properties that become available for sale will also drop off sharply as we head into December.  This is a seasonal trend that we do not expect will be any different this year.

With the planned State border openings in December, we do expect that the buyer depth will return quickly early in the New Year as those who are relocating become buyers who will compete with the already heightened demand here in Brisbane.

Of course, not all people who relocate will buy, so we also expect a further tightening in vacancy early in 2022.

With Brisbane already experiencing a tight rental market, it is likely that tenants will find it even more difficult to secure a property as more people compete for limited stock.

At some stage we do expect that the rate of growth in Brisbane will start to slow, and this is likely to occur at some stage throughout 2022, perhaps once house prices increase to a level where affordability constraints become an issue.

Additionally, further tightening of credit policies and increases in fixed interest rates could slow some of the housing activity or even an increase in listings which is a trend already observed in Sydney and Melbourne.

That said, there are no signs of any of the above at this stage, so hold on for the ride everyone.  Brisbane property growth is leading the nation and we expect this may continue in the months ahead.