Units pip houses at the post in photo finish

House and unit prices both fell marginally last month but it was units that performed marginally better than houses, with areas of growth and stability still evident around the country.

It was a tightly fought race but units have pipped houses by a short half head in horseracing parlance, although both were well off their personal best on a soft track.

CoreLogic's monthly Unit Market Update shows both houses and units recorded a 0.1 per cent fall in values over May, the first fall since September 2020, as quarterly and annual trends in values continue to weaken.

But in a photo finish, race stewards went to an extra decimal point to declare that units had outperformed houses by a close margin, falling 0.08 per cent and 0.15 per cent respectively.

After recording an easing in the growth trend since March 2021 (2.8 per cent), CoreLogic’s national home index recorded its first month of negative dwelling value growth in 20 months.

The soft track that units and houses were tackling comprised lower consumer sentiment, increasing global uncertainty, mounting inflationary pressure, and the first cash rate rise since November 2010, and didn’t even factor in the 0.5 per cent rise the following month.

May’s result saw the annual performance gap between national houses and units fall to its lowest level since April 2021 (6.2 per cent), at just 7.0 percentage points.

The combined capitals unit market fell -0.2 per cent, its first monthly decline in values since October 2020, while regional unit values showed some resilience rising 0.8 per cent over the month. 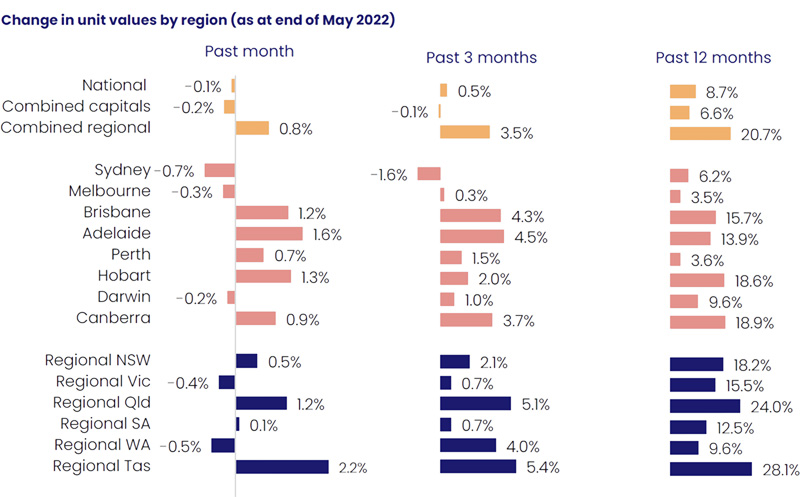 CoreLogic research analyst Kaytlin Ezzy said monthly declines across Sydney (-0.7 per cent) and Melbourne unit values (-0.3 per cent) weighted heavily on the combined capitals and national result, collectively making up 71.4 per cent and 55.8 per cent of unit markets respectively.

Since peaking in November 2021, Sydney unit values have recorded progressively larger monthly declines, while Melbourne units depreciated -0.1 per cent over the year to date.

“While last month’s rate rise likely added further downward pressure to the Sydney and Melbourne unit markets, growth conditions have been weakening over the past year amid worsening affordability, lower consumer sentiment and rising fixed mortgage rates,” she said.

Some of the smaller unit markets also saw values fall in May. Values across Darwin, regional Victoria and regional Western Australia fell 0.2 per cent, 0.4 per cent and 0.5 per cent over May respectively.

Outside of these markets, growth in unit values remained positive, however, previously strong markets are now showing signs of a slowdown.

Across Queensland the pace of quarterly value growth has eased from its recent cyclical peak recorded over the three months to April, down 30 basis points in Brisbane (4.3 per cent) and down 1.2 percentage point across regional Queensland (5.1 per cent).

“Adelaide is the exception to the slowdown in growth, with unit values rising 1.2 per cent over May and recording a new cyclical peak in quarterly growth over the three months to May (4.5 per cent).” Ms Ezzy said.

“At the other end of the spectrum, some unit markets that recorded a slowdown in growth over the second half of last year, including Hobart (2.0 per cent) and regional Tasmania (5.4 per cent), are now seeing their quarterly trend accelerate again.”

Some suburbs will weather the storm better than others, according to a new index by comparison site Finder.

Finder’s new Property Investment Index uses a range of data inputs to predict price stability in each suburb across Australia's major cities, including Sydney and Melbourne.

The index shows houses in Sydney’s Cammeray, Redfern, and Wahroonga have the highest potential for price stability, while for apartments the standouts were Waverton, Rozelle and Paddington.

In Melbourne, houses in Alphington, Aberfeldie, and Carnegie show the highest potential, according to the index. Aberfeldie was also singled out for apartments, along with Yarraville and McKinnon.

Rising 9.5 per cent over the 12 months to May, national units are now recording the strongest annual rental growth since July 2007, when rental demand was bolstered by strong overseas migration.

Amid growing affordability constraints and the slow return of overseas migration, rental demand has swung towards the higher density sector, with national unit rents rising 3.4 per cent over the three months to May.

Ms Ezzy noted that rental demand across the unit segment fell dramatically at the beginning of the pandemic as preferences shifted towards the lower density sector.

Due to its relative affordability, rental demand across the higher density sector has grown steadily over recent months.

This saw national vacancy rates tighten from 1.52 per cent in April to 1.47 per cent in May. 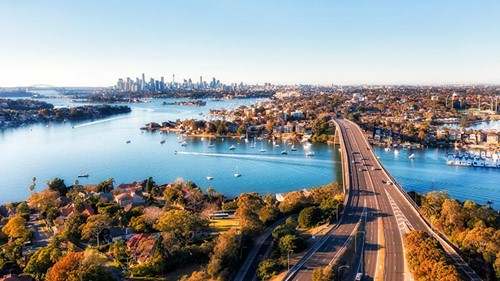 The pockets of Sydney defying the downturn
8-6-2022 |  Residential