Over the past year, national house price growth has outstripped the pace of unit prices but with both markets levelling out, that gap in performance is narrowing.

Over the past year, national house price growth has outstripped the pace of unit prices but with both markets levelling out, that gap in performance is narrowing.

House and unit prices rose again in March, and in the first quarter of 2022, but the pace of growth is slowing and it is house prices that are coming off the boil the quickest.

CoreLogic's monthly Unit Market Update showed the annual performance gap between houses and units fell to 8.7 per cent in March, as both markets slipped further from their peak rate of growth recorded in January. 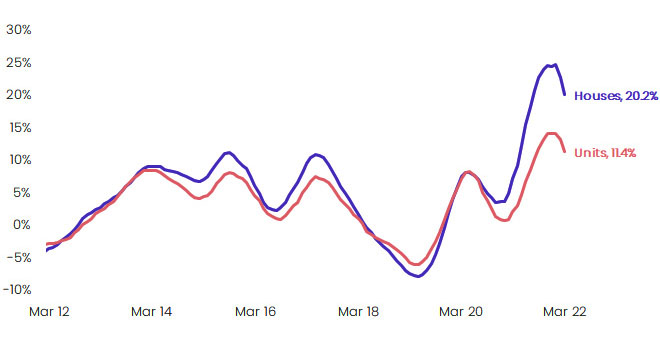 The engine rooms of the country’s continued spell in positive territory were Queensland and South Australia, with Perth showing signs of being a late arrival to the party.

Brisbane continues to be the standout performer among the capital city unit markets, recording in March a new cyclical high in monthly (1.6 per cent), quarterly (4.6 per cent) and annual growth rates (15.1 per cent). The typical Brisbane unit rose $63,000 in value over the past 12 months. Just one Brisbane suburb recorded a fall in unit values over the first quarter of the year.

While Adelaide units continue to record strong monthly growth rates, quarterly growth appears to be slowing, decreasing from 4.4 per cent in January to 4.2 per cent over the three months to March.

Perth recorded a surprise reversal in its quarterly growth trend, with the reopening of the West Australian border potentially pushing unit values 0.7 per cent higher over the three months to March. While quarterly growth has remained positive across Hobart, Darwin and Canberra, the pace of growth continued to ease over March.

While the smaller capital city and regional markets continue to surge, unit values are beginning to record quarterly declines across the more expensive cities of Sydney (-0.6 per cent) and Melbourne (-0.2 per cent).

With a median value of $833,815, the typical Sydney unit is still approximately $355,000 more than the typical Brisbane unit, and more than double the price of the average Adelaide unit.

But that gap may be closing to some degree, with 51.4 per cent of Sydney’s unit markets analysed in CoreLogic’s Mapping the Market Report recording a decline in values over the first quarter.

Several of the largest falls were in the city’s Northern Beaches region.

Across Melbourne, 58.0 per cent of the unit markets analysed recorded a decline in values, with the largest value declines recorded across the inner-city markets.

Tim McKibbin, CEO, Real Estate Institute of NSW, said the unit market may be one to watch over coming weeks and months.

“Houses are still recording stronger value growth compared to units but houses have also recorded a faster deceleration in the pace of quarterly growth,” he said.

“This could be interpreted as relative stability in the unit market, particularly for well-located properties with access to infrastructure, jobs and amenity, but rising residential construction costs must be factored in, as this is changing the landscape for the development community.

“In the 12 months to March costs were up 9 per cent, which is the highest annual growth rate on record outside of the introduction of the GST.

“These variables all affect price but they also impact the supply shortage that we know is compounding.

“Each year, in New South Wales we fail to build enough new homes to satisfy demand when population growth is taken into account.”

The investment proposition for units is becoming more favourable in terms of rental return.

Property values are facing more headwinds than tailwinds, according to CoreLogic Research Analyst Kaytlin Ezzy, who said the unit segment may be more resilient relative to houses as the Australian property market inches toward the downswing phase of the cycle.

“Housing affordability constraints, rising mortgage rates and the possibility of a lift in the cash rate over the next few months could see less buyer demand throughout the year, however, unit capital growth cycles have historically seen less volatility than houses and as a result the downswing in prices is expected to be less than that in the detached house segment.”

Units were also presenting as a more viable option for investors, according to Ms Ezzy.

“Unit stock is also generally more affordable relative to detached houses in the same area, and a downturn in demand may be partially offset by the fact that units are a more viable option amid housing affordability constraints.

“It is clear the investment proposition for units is becoming slightly more favourable in terms of rental return.

“Gross rental yields seem to have bottomed out in some cities and are now rising.

“This may at least in part be due to relaxed restrictions around international travel earlier this year, where overseas arrivals tend to be renters, and tend to be concentrated in densely populated parts of cities.”