There’s an old saying in real estate that says ‘anyone with a heartbeat can sell property in a hot market’.

But according to Gold Coast developer Christie Leet, sales are running so hot on the Gold Coast at the moment that a heartbeat might not even be necessary.

Mr Leet has a unique perspective on Queensland property, having spent nearly three decades selling real estate in the Whitsundays before embarking on a career shift in 2018 to become a developer on the Gold Coast.

Shortly after landing on the Gold Coast, Mr Leet established Sherpa Property Group, a boutique developer which is currently enjoying a stunning run of sales success.

In just three years, Sherpa has grown to have a development pipeline worth more than $250 million, with $51 million of beachfront homes at its latest project, Perspective Nexus at Palm Beach, selling within weeks of a marketing launch.

The sales rush adds to more than $70 million in apartments sold by Sherpa over the past 12 months.

Mr Leet said the current buying frenzy on the Gold Coast, fuelled in part by record-setting levels of interstate migration, was easy to understand.

“I left The Whitsundays thinking it was the best place to live and to recreate in the world, and I still do believe it’s in the top two, but the one that is probably a little bit higher is the Gold Coast,” Mr Leet told Australian Property Investor Magazine.

“The physical side of things on the Gold Coast is just extraordinary, then you look at employment, migration, population growth, interest rates and all the macro factors that lead to a great marketplace, the Gold Coast has got them all and more than most other places I know.

“You can understand why the marketplace is going so well.”

Sherpa added to its development pipeline late last month with the acquisition of a pair of beachfront sites, a process Mr Leet said was becoming all the more competitive as sales activity continued to soar.

And with his enviable pedigree of having spent nearly three decades living and working in The Whitsundays, Mr Leet is more qualified than most when it comes to identifying what makes a beachfront development site special.

Those years of experience, Mr Leet said, have shaped the development philosophy of Sherpa Property Group, and that philosophy is probably the antithesis of what many would expect from a typical developer.

“We believe that less is more, so if we can under-develop something and still make it work, we think that’s a better outcome for everyone,” Mr Leet said.

Mr Leet’s rationale is quite simple - prime beachfront development sites are scarce, so to ensure Sherpa-developed residences will be as liveable as possible and immediately appreciate in value, the homes built on the sites should be scarce too.

That strategy means Sherpa’s projects often look quite different to its competitors, and the risk-averse Mr Leet would not have it any other way.

He said a good example of Sherpa zigging while others zagged was its Freedom Rainbow Bay development near Rainbow Beach, where the developer purchased a 4,000 square metre block close to the beach with an approval in place for 157 apartments.

But instead of pushing development controls to their limit and maximising the number of dwellings allowed to be built on the lot, Mr Leet opted to deliver 16 separately-titled luxury houses, because his research revealed a massive undersupply of detached housing stock in the Rainbow Beach area.

Sherpa’s Perspective 488 in Palm Beach evolved in a similar manner, with the project comprising seven full-floor apartments, a beach villa and three freehold beach houses on the absolute beachfront.

“Most of our projects are probably half of the density of what we could do because we think the ultimate form of luxury is privacy and uniqueness,” Mr Leet said.

“Our development philosophy will really come to the fore when people go to settle, and really realise what they are getting irrespective of the market conditions.

“And I think the compelling advantage for an investor is we build for owner occupiers.

“I always think that if you open the market up to both investors and to owner occupiers, your capital growth has to be higher.

“Our capital growth rate is likely to be higher than a lot of our competitors, and people really understand that when you have all of your toes to the sand, as opposed to just your lounge chair and a bar stool, it is a real point of difference.

“I think our success will really come to light in a year’s time or a couple of years’ time when we deliver these projects and people really understand the uniqueness of what we’ve got.”

While his development strategy may be unique, Mr Leet’s sales success has been replicated up and down the Gold Coast by a growing cohort of local and interstate developers.

One of the more recent to experience the swift sales phenomena was Macquarie York, which sold $72 million worth of homes in a matter of weeks at its Allure project on Chevron Island in Surfers Paradise.

While 67 of the 90 sales at Allure had been to owner occupiers, investors also snapped up a reasonable number of apartments, with 40 per cent of investor sales going to purchasers based in NSW, and 10 per cent to Victoria.

Sydney-based Macquarie York will now turn its focus to its second Gold Coast development, as it formulates plans for an ultra-boutique project in Palm Beach.

Much of the sales activity on the Gold Coast has been driven by strong interstate migration, as Queensland’s population increased by 43,900 over the 12 months to the end of March, with much of the growth centred on Brisbane, the Gold Coast and the Sunshine Coast.

The influx of new people has been pushing property prices up in a big way, with big gains being achieved up and down the coast according to data from CoreLogic.

In Surfer’s Paradise, median house prices rose by 25 per cent in the 12 months to the end of August, while median unit prices gained 22 per cent.

Price growth was even stronger at the southern end of the Coast, with Coolangatta recording lifts of 35 per cent for houses and 29 per cent for units over the year, while in Burleigh Heads house values jumped 44 per cent and units lifted 39 per cent.

Halfway between Surfers and Coolangatta in Palm Beach, median house prices rose by 44 per cent over the year, while units were up by 39 per cent.

The head of one of Queensland’s biggest developers, Devine Living chief executive Greg Devine, is expecting the unprecedentedly strong sales conditions to last well into the medium-term, with the region to get a big infrastructure and jobs boost following the announcement that the Sunshine State would host the 2032 Olympics.

Devine Living recently brought forward the launch of its latest project, a luxury $370 million, 38-storey tower to be built in Surfers Paradise, in response to high levels of demand for beachfront apartments.

Mr Devine, who has lived and holidayed on the Gold Coast for more than 30 years, said the Olympics win would help establish the region not only as Australia’s premium lifestyle destination, but one of the best on a global level as well.

“If people were thinking about moving to Queensland for the great weather and lifestyle, they will be making their decisions now to bring their investment forward and benefit from the opportunities happening between now and the Olympic games.

“International companies will be encouraged to look at Queensland and consider getting a foothold here to benefit from the 2032 Olympic Games.

“We already know what fantastic weather and lifestyle we have here, now this is our time to shine.

“The timing is perfect and we have 11 years of economic growth supported by infrastructure and planning.”

Editor's note: Following publication of this article, Iris Capital unveiled plans for an $800 million luxury development in Broadbeach. Check out the details here. 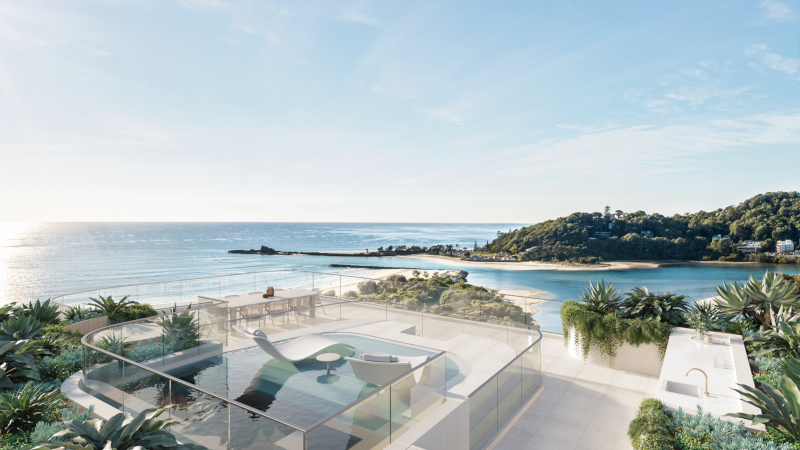 Christie Leet says Sherpa's aim as a developer is to create not only a unique living experience, but a fast growing investment for buyers. Image: Sherpa Property Group 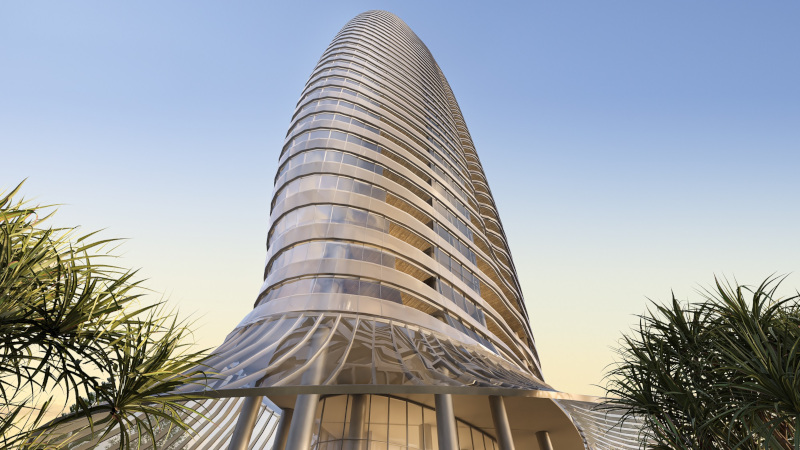 Devine Living's Royale will be another striking addition to the Gold Coast skyline. Image: Devine Living