A new report from Herron Todd White has identified a range of Melbourne suburbs that may not often be the front of mind for buyers, but could potentially provide strong returns for property investors.

Data from CoreLogic showed Melbourne’s median house price rose by 1.8 per cent in May, following its biggest gain in nearly 33 years in April, when the median increased by 2.8 per cent.

Gains at the top end of the market were even stronger, rising by 6.5 per cent over the past three months, compared to 3.5 per cent for more affordably-priced properties.

HTW Melbourne director Perron King said he anticipated the market to stabilise in coming months, following the phase-out of JobKeeper and HomeBuilder stimulus packages, but there were still certain locations around Melbourne that offered solid capital growth potential.

In the inner city, Mr King said Fitzroy was running hot, with a median sale price of $1.768 million for a three-bedroom house.

“The location, liveability, services and amenities contribute greatly to these prices.”

He said average prices were significantly lower in Collingwood than Fitzroy, with a median of $1.462 million for a three-bed house.

“The apartment and unit markets for these suburbs depicts a similar story, with Collingwood residents saving roughly $30 per week on rent,” Mr King said.

“A contributing factor to this is likely a number of large scale apartment complexes in Collingwood, creating more supply for renters compared to the tightly held Fitzroy.”

Mr King said other hidden gems in the inner city that were more affordable than their pricey neighbours included Kensington, Brunswick West, Parkville and Abbotsford.

On Melbourne’s northern outskirts, Mr King said fundamentals were aligning for significant growth in Mickleham, located a 36 kilometre drive up the Hume Highway from the CBD.

A surge of development activity is expected to nearly triple Mickleham’s residential population by 2031, with the number of occupied dwellings to jump from today’s 4,126 to 11,506.

Like Collingwood, Mickleham’s close proximity to the more established suburb of Craigieburn gave it similar high levels of amenity at a lower price point.

“The median house price in Mickleham and nearby Donnybrook are $585,000 and $552,000, respectively, compared to an already established hotspot suburb in the region, such as Craigieburn, which provides generally smaller houses on smaller lots, but commands a higher price of $605,000,” Mr King said.

In the South-East, Mr King said there was no doubt that the Mornington Peninsula had emerged as one of the most vibrant markets in 2021, with many buyers lured by the lifestyle features on offer.

While Red Hill, St Andrews Beach and Rye were identified as the top three performing suburbs in Melbourne in the first three months of this year, Mr King said there were hidden gems to uncover in nearby locations.

“Tootgarook is one of the coastal suburbs in the Mornington Peninsula region between Rye and Cape Sound,” he said.

“Being adjacent to one of the best performing suburbs in Rye, Tootgarook is likely to benefit from the ripple effect.

“In contrast, Tootgarook has a median value of $700,000, presenting plenty of scope for values to grow as buyers seek great value property in the coastal region.”

Rental vacancies in Tootgarook are currently around 0.5 per cent, while its median rent is $385/week.

In Melbourne’s west, Mr King said there were a handful of suburbs that were often overlooked by buyers that not only held big potential for price growth, but also provided a big value proposition.

Mr King said South Kingsville, sandwiched between blue-chip suburbs Yarraville and Newport, was a little-known location that was poised for a big pickup.

“Though small in size, the suburb has a lot to offer in terms of its amenities with shops and parkland within reach along with access to major arterial freeways,” he said.

“Attributes contributing to why it is not as desirable to potential buyers are its current lack of infrastructure and its size.

“It is also located near an industrial-zoned area, which does have the potential to be rezoned into residential and developed into town housing and units, which would increase supply and attract potential buyers to the area.

“The area’s proximity to the city, surrounding suburbs and development potential makes South Kingsville an area to look out for in the future.”

Other western suburbs flying under the radar, according to Mr King, are Pascoe Vale and Pascoe Vale South.

“These suburbs offer buyers an excellent opportunity to get into the market in a geographically-sound region without having to pay the premium price of its surrounding blue-chip neighbours,” Mr King said.

In Melbourne’s eastern corridor, buyer demand has historically been focused on the prestigious suburbs of Balwyn, Box Hill, Camberwell, Templestowe and Doncaster.

But Mr King said investors looking for an entry point would be well-served to consider Forest Hill, located near Blackburn South, Nunawading, Vermont and Burwood East.

“Over the past five years, Forest Hill has experienced a compound growth rate of 2.3 per cent for houses and 14.4 per cent for units,” Mr King said.

“CoreLogic reported a median house price of $980,000, which sits below the median for the Whitehorse City municipality of $1.17 million and has remained relatively stable over the past 12 months.

“This may indicate that buyers can own property in one of Melbourne’s desirable leafy green suburbs for a more affordable price compared to surrounding suburbs, and enjoy the same luxuries and amenities of their neighbours with only a small amount of sacrifice.” 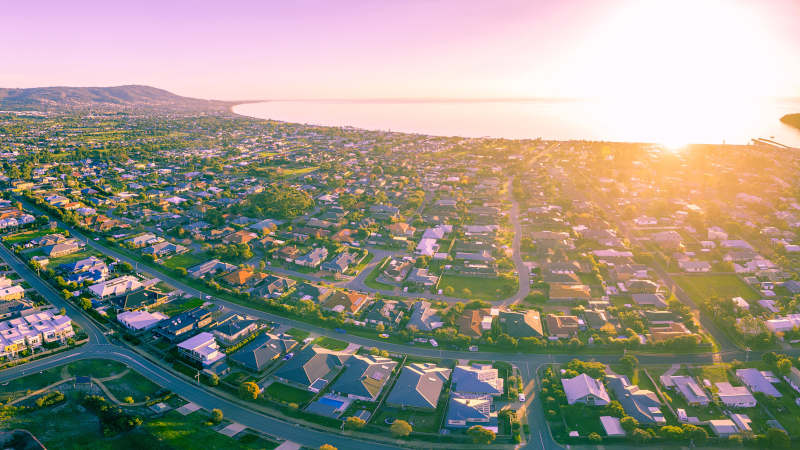 A coastal lifestyle has lured many buyers to the Mornington Peninsula. Photo: Shutterstock