With Australia locked into a political battle with China that is pitting national values against economic pragmatism, and international borders likely to remain closed for the foreseeable future, the prospect of foreign demand rebounding to former levels anytime soon appears forlorn.

Newly published figures from the Foreign Investment Review Board (FIRB) show a fall-off in purchasing by foreigners of 11 per cent between the 2018 and 2019 fiscal years, to 9,295 sales valued at $7.5 billion.

Investment in Australian residential property by foreign interests plunged by $1 billion even before the coronavirus crisis struck.

Exacerbating the situation further are the stamp duty taxes and surcharges being imposed on foreign buyers.

A drying up of project launches in the wake of the pandemic is likely to drive down building numbers further, with border closures stripping away demand.

The number of Chinese residents investing in Australian housing has fallen steadily since 2015, when Victoria was the first state to introduce a surcharge on foreign purchases, and other states followed suit with fees as high as 8 per cent.

A land-tax surcharge of up to 2 per cent for foreign buyers was also levied by individual states.

The taxes can really add up. It is not unusual for an 80-square-metre two-bedroom unit in a top location in Sydney to sell for $1 million or more.

Under existing rules, foreigners who aren’t citizens or residents of Australia are only allowed to buy brand new properties. They aren’t allowed to buy substantially renovated homes.

Given China’s stock market has continued to perform strongly, there is still a pool of cashed up investors looking for offshore options to invest their money.

Profit-takers had previously taken the spoils from their domestic share markets and moved them into “tier-one” cities such as Melbourne and Sydney.

When housing prices are represented in US dollars and Chinese yuan, the prices don’t look as intimidating, due to the depreciating Australian dollar, which this year hit a six-year low against the US currency.

But travel restrictions without an imminent end and China’s seeming intent to sideline Australia due to its stance on a coronavirus investigation among other things, have stopped Chinese investors in Australian property in their tracks.

Realestate.com.au data indicated searches from Hong Kong and the US had remained up year-on-year despite the border closures, likely from expats looking to return home and Hong Kongers weighing up Australia’s visa offers in the wake of a mainland crackdown on the once-autonomous city.

Executive chairman of Chinese property portal Juwai IQI Georg Chmiel said despite mainland buyers wanting to purchase in Australia, the practicalities of doing so had made it difficult.

“The bad news is that transactions have dropped precipitously due to travel bans and other practical difficulties,” he said.

“Transactions do happen but the only foreign buyers making purchases are in Australia or are willing to buy sight unseen.”

“The FIRB data is fascinating and confirms some things that we already know.

“Our data shows there are fewer Chinese, fewer Koreans, fewer Indians looking at Sydney real estate because travel is so difficult and that’s a big problem for the market in newly developed apartments.”

Looking ahead, Mr Chmiel said he expected activity to pick up, due to Australia’s good handling of the coronavirus pandemic.

Australia’s situation is far from unique.

In the United States, home sales to Chinese buyers may plunge as much as 60 per cent this year.

Travel and visa curbs, a trade war and a US president seeking a scapegoat for his mishandling of the pandemic have deterred Chinese investors.

Rich Chinese have become the biggest foreign contributor to the US housing market over the past decade, but deal numbers dropped by 62 per cent over the last two years to $11.5 billion in the year to March.

The National Association of Realtors now estimates that number could fall further, according to news service Reuters, to between $5 billion and $7 billion in the current year, depending on whether existing travel restrictions on arrivals from China are lifted earlier.

Inquiries about US properties with Chinese international property firm Juwai IQI are still up this year, showing the pent-up demand may one day return.

Australia is a relative minnow on the world stage but it is the second biggest magnet to Chinese property investment, behind the US and ahead of the UK and Canada.

It is also just one more country that China has been rubbing up against in 2020.

In the UK, Prime Minister Boris Johnson's government has taken an increasingly hard line this year on the security and strategic threat from China, moving to push Huawei out of its 5G network, increasing screening of foreign investment and playing hard-ball on the crackdown on Hong Kong.

Norway, Czech Republic, Canada, India and Japan are among the others that have had political skirmishes with China this year and been subject to regulations imposed on the flight of Chinese capital to their countries.

What remains to be seen is whether those political stoushes will continue to impede China’s overseas property investors when COVID-related travel restrictions are finally eased. 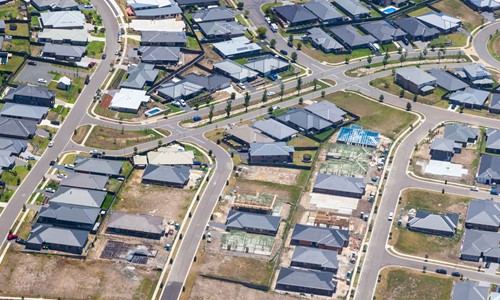