Adding to the momentum, Global developer SPG Land and its joint venture partner Gordon Corp this week lodged a development application to build an $800 million, three tower development in the heart of the Gold Coast’s tourism precinct on Ferny Avenue.

The new development, designed by award winning architecture firm Rothelowman, will include a retail and dining plaza and extensive open space, with the developers aiming to regenerate the northern end of Surfers Paradise.

Three towers, at 38, 40 and 42 storeys, will provide 792 apartments to the Gold Coast market at a time when developers are reporting almost unprecedented levels of buyer demand.

SPG Land chairman David Wang described the project as transformational not only for Surfers Paradise, but for the broader Gold Coast region.

“We have had a long association with the Gold Coast, and it’s especially exciting that we have been able to enlist the talents of a remarkable local team to bring this project to fruition,” Mr Wang said.

SPG’s previous Gold Coast projects include the $162 million Cambridge Residences at Rubina, while its international experience comprises 56 projects across the Asia-Pacific region over the past two-plus decades.

A marketing campaign for 103 Ferny Avenue is expected to be officially launched before the end of the year.

Meanwhile, local developers are continuing to report strong sales success for projects up and down the Gold Coast.

Prolific developer Marquee Development Partners described buyers descending on a pair of its Gold Coast projects as a swarm, with its $85 million One Cannes project selling 95 per cent of its apartments in less than two months.

Located between Broadbeach and Surfers Paradise and designed by Plus Architecture, One Cannes is Marquee’s seventh Gold Coast development, with its portfolio of projects valued at more than $400 million.

The sales success at One Cannes followed the developer receiving more than 1,600 buyer enquiries for SOL, a 46-apartment boutique project proposed to be built on the Kirra headland just weeks after being issued development approval.

Ms Griffen said Marquee’s success could largely be attributed to its focus on lifestyle and resort-style facilities, with its amenities particularly being appreciated by buyers over the course of the pandemic.

“Our commitment to creating extravagant living environments is what sets us apart from the crowd,” Ms Griffen said.

“We believe luxury shouldn’t just look superior, it should feel superior, and that’s the motif we employed in the design of SOL.”

At nearby Palm Beach, Sherpa Property Group said it sold $36 million worth of beachfront residences just weeks after the rapid sell-out of its Perspective 488 project at Palm Beach.

Sherpa Property Group fast-tracked the marketing launch of Perspective Two Sea after its previous sales success, with the luxury full-floor residences selling prior to an official marketing launch.

The developer’s chief executive, Christie Leet, said a development application for Perspective Two Sea was lodged just five weeks after acquiring the site, in an effort to capture the attention of ravenous buyers on the Gold Coast.

“We are blown away by the response to our second Palm Beach development and are incredibly grateful to have found residents for each of our Perspective Two Sea apartments,” Mr Leet said.

“It’s extremely rewarding to have our project so eagerly received by buyers, and we can’t wait to start bringing our future residents’ homes to life.”

On the northern end of the Gold Coast, GH Australia achieved a quick sellout of its 46-lot land estate The Gallery in Hope Island, selling $33 million worth of blocks to a diverse range of buyers.

The Gallery’s sales and marketing consultant Tony Hymus said local downsizers, interstate sea-change seekers and young families had been attracted to the estate.

“It’s becoming increasingly rare to find good value land on the Gold Coast, given how much of a boom the market is experiencing,” Mr Hymus said.

Gold Coast-based developer Homecorp is also mobilising to cash in on the buyer boom, preparing to launch a $150 million, 25 level tower in the Broadwater’s prestigious Golden Mile.

Located on Marine Parade in Labrador, Homecorp’s Eve Residences will comprise 155 residences, all of which will be pet friendly.

Homecorp marketing consultant Mark Jewell said the project was the latest in a Gold Coast portfolio worth more than $1.5 billion.

“At the moment, all roads are leading to the Gold Coast for investors, families and downsizers, and we are bringing an affordable luxury product that will be extremely competitive in the local market,” Mr Jewell said.

Against the backdrop of buyer demand, competition for available beachfront development sites is getting fierce, with two properties at the southern end of the Gold Coast generating some of the highest levels of interest ever seen by selling agents from Ray White Group.

The two adjoining properties sold to separate buyers for a total of $11.53 million, with the Bilinga Beach Motel located on Golden Four Drive making up the majority of that price tag at $9.58 million.

“This campaign generated some of the highest interest levels we have ever seen, with over 400 enquiries recorded and close to 30 offers received between both properties,” Mr Fritzsche said.

“We had interest from a wide range of parties, including developers, investors and owner occupiers alike,” Mr Willems said.

Closer to Brisbane, construction has started on developer Traders In Purple’s 126-dwelling Lasail, after $40 million worth of sales were recorded in the last three months.

Located in Newport, Lasail will provide residents with direct water frontage and access to Moreton Bay, with the first stage expected to be complete by late next year.

Traders In Purple development director Brett Lentz said investors and owner-occupiers had both been attracted by the fact that each apartment in the project had water frontage and spectacular views.

“As a result, we have had a terrific response from buyers who - like us - have fallen in love with this premium location and the enviable coastal lifestyle it will deliver,” Mr Lentz said.

“We want to redefine resort style living by offering something extra special and taking full advantage of an absolutely stunning and one-of-a-kind location – we are very proud of Lasail.”

Lasail is Trader In Purple’s 11th residential development on the Redcliffe peninsula, with the second stage of the $120 million project likely to be fast-tracked to satisfy rising buyer demand. 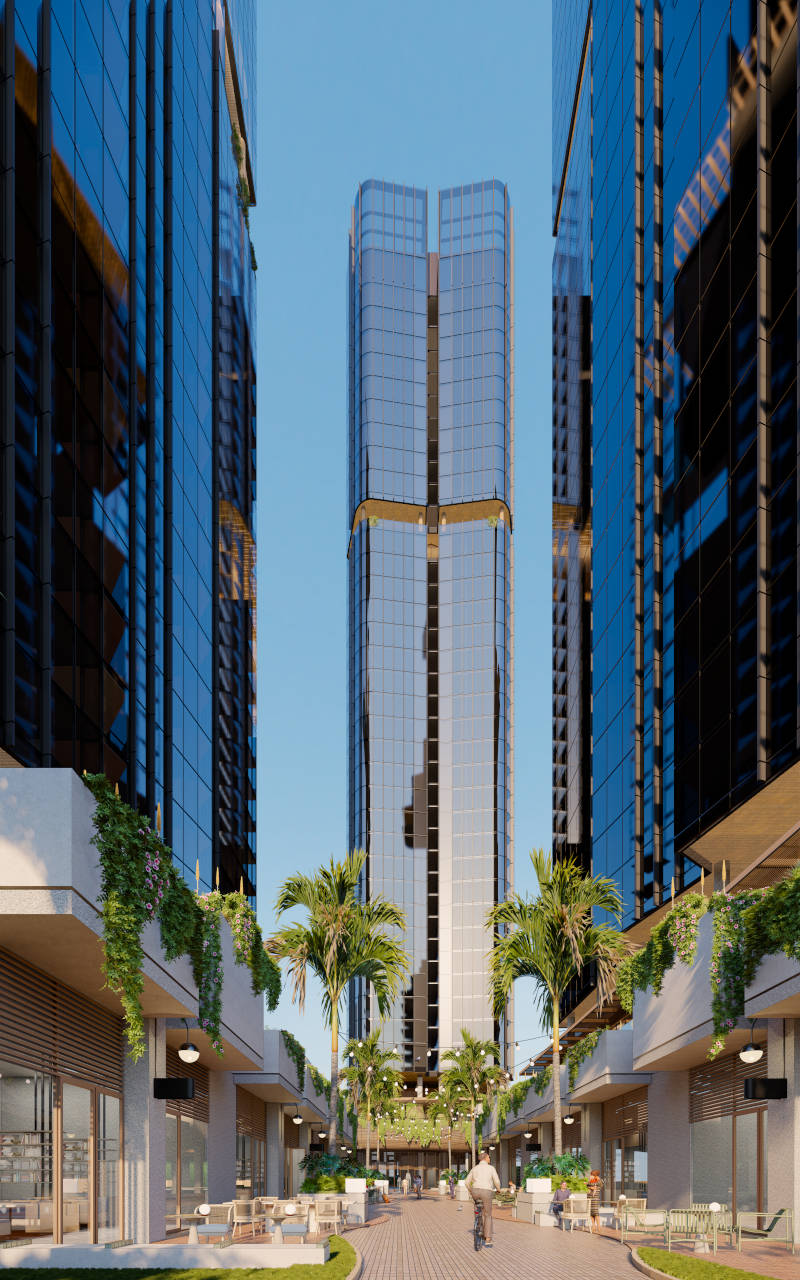 The three-tower precinct proposed by SPG Land will be among the biggest-ever projects ever built on the Gold Coast. Image: SPG Land 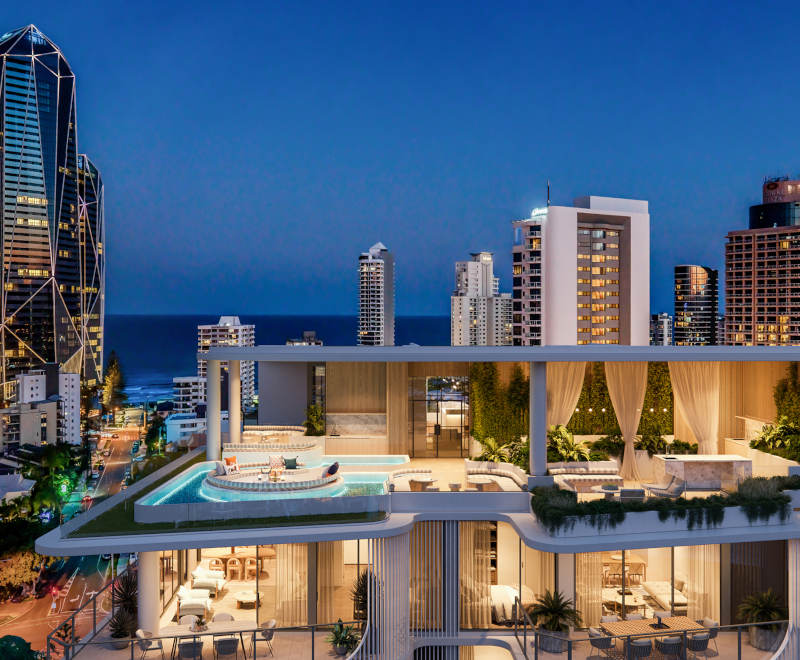