ID_Land announced this week it had acquired two land parcels in Gisborne, comprising 86 hectares of residentially-zoned land and 180ha of neighbouring farmland.

The residentially-zoned land will be developed into a new housing estate and will be ID_Land’s second Gisborne project, adding to its $250 million Willow community which was launched in 2019.

ID_Land also said it had amalgamated several sites along Barwon Heads Road in Armstrong Creek, where it will create a 400-lot estate, estimated to have an end value of more than $100 million.

“Recent acquisitions in Gisborne and Armstrong Creek reflect the confidence we have in the regions, with five ID_Land projects either delivered or currently in development across these two important locations,” ID_Land director Matthew Belford said.

At the same time, the establishment of Title Capital will provide institutional and sophisticated investors, as well as high-net-worth individuals and family offices to co-invest in the group’s residential developments.

Mr Belford said the diversification had resulted in the creation of ID_Corp, which will coordinate the funds management and land development divisions, as well as homebuilder Shape Homes.

ID_Corp’s growth strategy is designed to lift its revenue from its current $300 million per year to around $500 million.

Part of that expansion plan is a replication of the company’s current operations in South East Queensland.

“The launch of ID_Corp and expansion into funds management is the culmination of our long-term strategy, and underpins the group’s next phase of expansion across our different business divisions,” Mr Belford said.

“As our pipeline continues to expand, Title Capital will provide the opportunity to co-invest alongside director Jeff Garvey and myself in residential developments in Australia’s best-performing regions.

“Our group’s journey to date has given us a blueprint for expansion into other parts of Australia, with South East Queensland currently top of our list.

“Our team is on the ground and actively seeking acquisitions in the region.”

Elsewhere in Victoria, investment manager Occasio Projects splashed $500 million earlier this month on a mixed-use town centre development in Mernda, on the northern outskirts of Melbourne.

Occasio managing director Ray Zelouf said a series of funds would be launched in coming months to give investors the opportunity to participate in the town centre development.

The project will comprise a $110 million shopping centre, which is under construction and on track to open midway through next year, amid 27 hectares of retail, commercial, entertainment and residential projects.

Mr Zelouf said Occasio’s board of directors, who have backed the project financially, were very pleased to have secured the Mernda opportunity.

“Occasio provides both debt and equity solutions across its portfolio and we are progressively playing a more active role as development partner across a growing number of these investments,” Mr Zelouf said.

“Occasio investors will have the opportunity to participate in a high-quality asset in Melbourne’s northern growth corridor, which will benefit from sustained population growth and rapid development.” 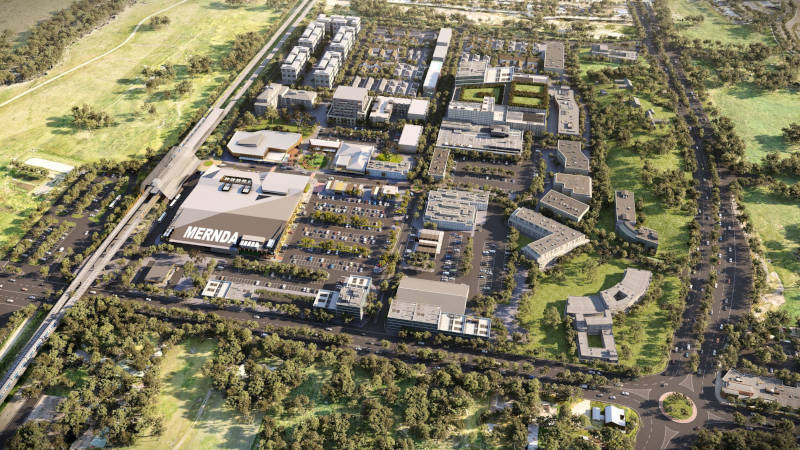 An architect's rendering of a completed Mernda Town Centre.