Two Australian states defied the national trend, recording an increase in the sales of detached houses in April.

Western Australia and Victoria have defied a national trend, recording an increase in the sales of detached houses in April.

All other states experienced a fall, with New South Wales sales dropping by 9.4 per cent, while South Australia declined by 2 per cent to be almost 43 per cent lower than during the same quarter last year.

The HIA New Home Sales report – a monthly survey of the largest volume home builders in the five largest states – is a leading indicator of future detached home construction.

Western Australia and Victoria were the only states that saw an increase in new home sales in April, up by 8.8 per cent and 4.0 per cent respectively. South Australia had a decline of 2.0 per cent, followed by Queensland (-9.0 per cent) and New South Wales (-9.4 per cent).

HIA Economist Tom Devitt Sales said sales of new detached homes fell by 1.2 per cent nationally in April, leaving sales for the first four months of 2022 stronger than the same period in 2021 but on a downward trajectory.

“Despite the fall in April, new home sales in the first few months of 2022 remain exceptionally strong and marginally higher than in the same period last year,” Mr Devitt said.

“The strong demand for new homes indicates the depth of the shortage of housing and the significant change in household formation rates, due to the pandemic.

“These strong sales are ensuring that the volume of home building and demand for skilled workers will remain strong at least until the end of 2023,” he said. 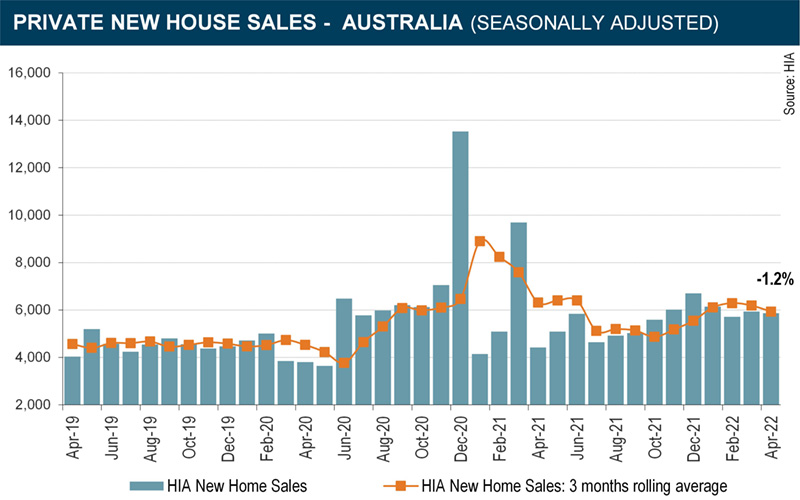 The issues raised by the HIA around the shortage of supply have echoed around the country for some years now and show no sign of abating, despite property affordability being a hotly contested election battleground.

The lack of housing supply, coupled with high house prices after years of meteoric capital gains growth, has driven more homebuyers into the unit market, which is now experiencing its own price growth and rapid rent hikes.

In its latest Quarterly Rental Review, CoreLogic showed national unit rents have bucked the trend seen since May 2019 and actually rose at a faster pace than national house rents over the first three months of 2022, recording a quarterly growth of 3 per cent while houses only increased by 2.4 per cent.

Similar to the national results, unit rents in the combined capitals also outperformed house rents over the first quarter, increasing 3.1 per cent compared to 2.2 per cent

In Sydney, where property prices are easing slightly after a marathon period of growth, the median Sydney unit rent by the end of March was $546 a week, an 8.3 per cent change over 12 months.

Compared to the previous quarter, gross rental yields for units also rose across Sydney, up 2.3 per cent during the quarter to 3.1 per cent.

“With only a limited amount of new apartments available in Sydney right now, it really is a race of ‘first in, best dressed’ especially for those seeking to secure quality property,” she said.

“There will be very little stock coming onto the unit market over the next two years and that is largely due to increased government red tape and increased demand from several buyer types.

“I’m afraid those who wait might find themselves out of options,” he said.

The supply shortage is only set to be exacerbated by the recent announcement to raise the home loan deposit scheme threshold to $900,000 this coming July, allowing more first home buyers and first-time investors to enter the market, he added.

Expansion in Melbourne’s growth corridors is also slowing but that is driven by an easing in consumer demand, rather than supply.

RPM’s latest first quarter Greenfield Market Report for 2022 points to the first signs of cooling for the Victorian greenfield land market to a normalised pre-Covid level.

There was a 29 per cent year-on-year decrease in vacant lot sales from 6,793 in the first quarter of 2021, to 5,285 in 2022. Although this demonstrates a reduction in consumer demand, it is still at a level above historical lot sales levels, which have averaged around 1,500 per month.

With new lot releases diminishing by 16 per cent in the first quarter compared to the same time last year, sales also remain at a level that is taking up limited supply, indicating the sustained long-term attractiveness of the sector.

RPM Managing Director Project Marketing, Luke Kelly, said Melbourne and its regions are coming off a sustained period of strong performance and resilience.

“So, it’s to be expected that we’re starting to see more traditional headwinds emerging and signs of the market cooling,” he said.

“An important indicator for the greenfield market is also the sustained median price growth of Melbourne’s established housing market.

“If this continues, this places the greenfield sector in good stead to demonstrate further resilience thanks to its persistent affordability advantage.

“Combined with expectations for overseas migration to return to pre-pandemic levels over the next couple of years, there could be the perfect storm brewing when it comes to consumer and investor sentiment,” Mr Kelly said.

In Western Australia, where home prices are still tracking towards more than 10 per cent growth for the year and new homes sales rose almost as much just this month, the State Government on Thursday (12 May) used its annual budget announcement to prioritise increased housing supply.

“We expect that economic strength and the forecast 1.2 per cent increase in population will continue to underpin further growth of WA’s residential sales market.

“The budget measures also acknowledged the critical role of incentivising the private sector to deliver additional housing supply, both through new construction and innovative investment models,” he said.

The targeted measures included expanding the Off-the-Plan Rebate Scheme and Keystart loan program and incentivising the construction of build-to-rent properties. 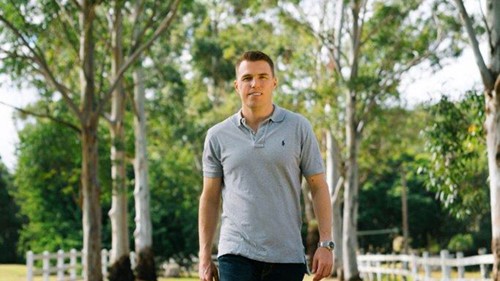