Signs that the property market is losing steam have been reinforced by falling new home sales and the ascent of units over houses in most capital city markets.

Signs that the property market is losing steam have been reinforced by falling new home sales and the ascent of units over houses in most capital city markets.

New home sales fell by 7.0 per cent in February following an 8.3 per cent decline in January, while at auctions across the country more units were sold than houses.

Clearance rates for units were higher than houses in Sydney, Brisbane, Adelaide and Canberra, according to Domain’s February auction report, as house affordability reaches a tipping point and investors returned to the unit market.

Melbourne was the exception, with houses remaining more attractive than units.

Despite this decline over the past two months, sales in the three months to February were up by 11.5 per cent on the previous quarter.

HIA Economist Tom Devitt said the declines in the first two months of 2022 follow an exceptionally strong performance in the final months of 2021.

“It is likely the Omicron outbreak and extended holidays have tempered sales in these months and it is also possible that sales are moderating since the post-Delta surge that emerged in the final months of 2021," he said.

“Sales in 12 months to the end of February were just 2.6 per cent lower than in the previous year.

“The volume of work under construction and approved but not yet commenced remains at record highs and will continue to keep builders busy across Australia, supporting strong levels of employment into 2023.

“Even as borders re-open and the functioning of supply chains improves, the salient constraint on builders this year will continue to be the availability of land, labour and materials.

“Shortages of shovel-ready land is especially likely to weigh on new home sales in the coming months as the pool of available land has been exhausted,” concluded Mr Devitt.

All of the big states saw declines in February, except Western Australia, which bounced back from its January low.

On a quarterly basis, sales in New South Wales increased in the three months to February 2022 to be 22.7 per cent higher than the previous quarter. This was followed by Victoria (+20.5 per cent), Queensland (+16.1 per cent), and South Australia (+8.8 per cent). Western Australia saw the only quarterly decline, down by 22.0 per cent. 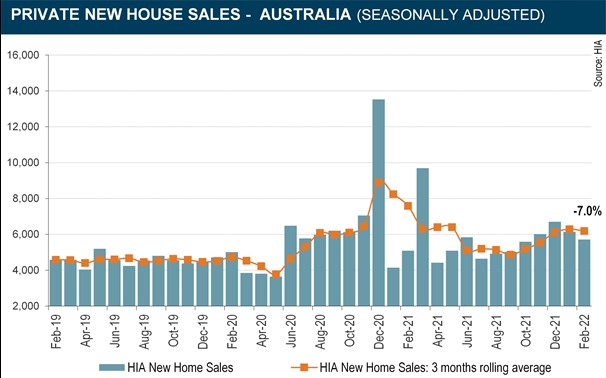 “Clearance rates continued to slide as a result of increased volumes and reduced competition, with Sydney and Melbourne clocking the highest number of homes scheduled to go to auction in February since Domain records began,” Dr Powell said.

REA Group’s March 2022 PropTrack Listings Report revealed that in February new listings in Sydney surged 37.3 per cent month-on-month, which is 13.2 per cent higher than a year ago.

“What we’re seeing here is a solid data point to mark a turning point within the Sydney market,” she said.

Regional NSW had a 32.4 per cent month-on-month jump in new listings, which are up 12.2 per cent on this time last year.