Helping to plan a comfortable retirement on the rapidly rising Sunshine Coast is the latest conunundrum for our expert panel of buyer's agents.

Retiring on the Sunshine Coast seems like it's every second Australian's dream right now, but the rapidly rising market and the hordes of buyers snapping up every available property makes it a challenging proposition, even for those well-established on the property ladder.

Planning a future move from Sydney's Northern Beaches to the Sunshine Coast is the latest conunundrum for our expert panel of buyer's agents.

Long-time Sydney Northern Beaches locals Carl and Dorothy are planning to retire in around 10 years and have set their sights on moving to the Sunshine Coast. They recently finished paying off their mortgage on their Freshwater home, which they bought in 1988.

As well as their home, which has been independently valued at $2.2 million, Carl and Dorothy have around $250,000 in savings and shares. They are open to apartment or townhouse living and would like to buy a luxury home close to the beach, which will pay for itself until they stop working. What’s their best strategy to get a slice of the Sunshine Coast?

Firstly, an analysis of the personal circumstances for Carl and Dorothy would need to be carefully considered before determining the appropriate lending structure as well as any potential taxation implications associated with this investment purchase.

That said, assuming both Carl and Dorothy are still working and on good incomes, they could potentially explore obtaining a loan to borrow 80 per cent of the value of a new home to retire on the Sunshine Coast, and use their cash reserves towards the deposit and purchase costs.

To ensure a financial buffer is kept, a purchase up to $900,000 could be affordable (subject to serviceability assessments) which would require approximately $220,000, leaving a further $30,000 as a buffer.  It is not known whether any other investment diversification is necessary, so this has not been considered in this scenario.

Also, without understanding the type of home they are looking to retire to, this example provides for the purchase budget that they could work within, rather than the specific type or size of the property that they would target.

The target gross yield to ensure that the property will pay for itself in this scenario would be 3.5% which would allow for holding costs as an investor including interest, rates, water, insurance, maintenance and body corporate fees.

It would also be important to note that this relies on vacancy rates to be less than 2 per cent across the holding period, because significant periods of vacancy would end up costing Carl and Dorothy a lot more.

In this scenario an interest only loan would ensure that Carl and Dorothy’s asset would pay for itself, but they would need to be aware that if interest rates rise, then their holding costs may increase and then the property may not be self-sufficient anymore.

Additionally, they may need to refinance the asset within the 10-year period if the interest only period expires, because the additional cost of moving into a principal and interest loan would impact on the costs and the property would no longer pay for itself.

Additionally, by preserving the debt by remaining on interest only lending during the 10-year period between purchase and their retirement, they would be preventing an increase in their tax liability.

This may happen if the income from the Sunshine Coast property started to exceed the expenses associated with holding the asset, thereby creating a potential annual tax debt.

Upon retirement, Carl and Dorothy could sell their Freshwater home, and use the proceeds from that sale to pay off the debt on the Sunshine Coast property.  They would then be left with a significant sum of cash that could be invested into other more liquid assets that would help to fund their retirement.

It would be important to assess the investment numbers before looking at specific properties to ensure that the investment objectives to meet their requirement for a self-servicing property are met.

This would require careful planning between their accountant, mortgage broker and property investment advisor so they could move forward with absolute confidence with their purchasing decision.

Carl and Dorothy are in a great position with a few options up their sleeves. Without knowing what their salary contributions currently are at this stage, let’s assume they earn a combined income of around $200,000 by format of the median income of their demographic profile for Sydney Northern Beaches, more specifically Freshwater.

Assuming the couple are in their mid 40’s and have a healthy sum of extractable equity of about $1,500,000, the couple would still be relatively serviceable by lenders.

This means that a large portion of these funds can be contributed to a sizable deposit for a very comfortable 2 bedroom unit or townhouse, somewhere in the region of 50 per cent which would afford a stylish $1,000,000 home.

By doing this, repayments would be far more attractive thanks to a lower LVR and the right loan structuring with their tenants contributing until their relocation.

This leaves a very healthy amount of more than $900,000 to contribute to multiple lower price point purchases which would be positively geared and in growth markets.

Moving forward, knowing that lenders typically lend to about five times a borrower's income, this allows for $500,000 more finance to be borrowed, after the purchase for the Sunshine Coast home which is currently being rented out.

Targeting higher yielding properties for these lower price point properties would be crucial to be able to continue the portfolio's growth, because more income would need to be created in order to release future equity by generating a higher income.

So what do these properties look like? Well as we’ve seen in the past, dorm housers in the right markets can significantly increase income as well as equity.

Purchasing two to three properties of similar formats with lower lending amounts and higher deposits installs equity from the get go as well as finance to release it, from these properties as well at their home which they intend on moving into in 10 years time, which so happens to be in a very high growth markets thanks to the developments of the new Maroochydore Smart CBD spanning over 53 acres.

Where would they live in the meantime, in their home where they currently live. After refinancing the property to a $1,500,000 loan on a 5 year I/O loan over 30 years, the first five years would result in about $5000 per month and the remaining five years (before they retire and relocate) would be about $6,800 per month. They could use the $250,000 which they have saved up to help here, keep this for as a security fund.

This format would be a great way forward for Carl and Dorothy because they are wanting to relocate into one of Australia’s biggest market movement areas.

Making the most of this with the finance they currently have would mean being very active in cash generation and equity building.

Once their retirement came around, their options would be wide and mighty as to what structures and strategies that could afford them a very happy investment journey forward.

I advise they put down a 20 per cent deposit in addition to setup costs such as stamp duty, solicitor fees and loan costs, etc. and to leave the remaining balance of their savings in an offset account - offsetting their interest will serve as a buffer.

Then, they should 'aggressively' aim to pay one property off while still working with as much surplus funds as possible.

A good suggestion would be to use what they were paying off their previous mortgage with - for example, if the mortgage was $2,000 a month you could use that to pay off the new loan.

Then, it is advised Carl and Dorothy place focus on superannuation after they stop working, living solely off this for several years, which people tend to do anyway, over which time the property value will grow significantly.

The amount of time they can spend living off super will depend on its balance.

The longer living off super the better because, once the property value has grown, they could then sell one property to pay off the other or sell both as Sunshine Coast is a hot, emerging market.

Doing this allows Carl and Dorothy to get into their market and build equity along with improving tax efficiency and developing future growth assets. 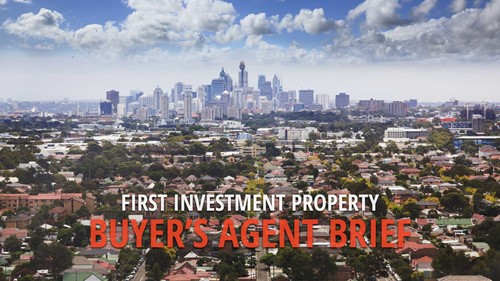 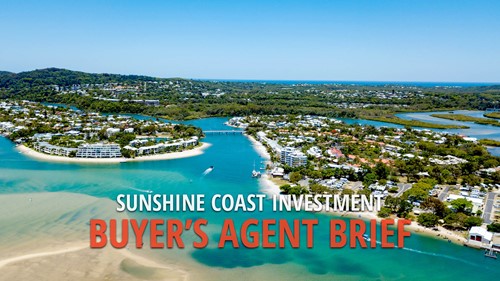