While the Australian Socceroos have played heroically to advance to the FIFA World Cup finals, their efforts arguably don't eclipse the performance of the Australian property market on the global stage.

Australia has qualified for the 2022 FIFA World Cup as the 28th ranked nation among the 32 to make it through to the finals in Qatar.

It’s a commendable performance but one that doesn’t compare to Australia’s performance in the global property league.

As Australia snuck past Peru in a penalty shoot-out to claim their spot among the finalists, Australia’s property markets outclassed the likes of Germany, United Kingdom and South Korea to clinch 13th place on the Knight Frank Global Residential Cities Index.

Tracking the movement of average residential prices across 56 countries and territories worldwide, the newly released report found prices worldwide increased by 10.2 per cent on average in the year to March 2022.

Australian cities recorded an average 18.3 per cent annual growth, with Brisbane (28.4 per cent) the frontrunner placing among the top ten countries in the world for annual price growth.

Property was a hot investment globally over the 12-month period, with 43 per cent of global cities registering annual price growth in excess of 10 per cent. Only nine cities out of 150 saw prices decline on an annual basis.

While the Perth property market is currently outperforming most other capitals, to the end of the first quarter it was languishing in 121st position (3.5 per cent) on the global index.

“Australia’s mainstream residential price performance has been heavily influenced by smaller cities and regional areas, which have continued in 2022 to record solid price growth due to the relocation of families and digital nomads to more affordable locations, investors returning to the market seeking a better rental yield and by others buying holiday homes for their retirement plans in the coming years.”

“Australia’s three best performing cities for annual price growth at the end of quarter one 2022 (Brisbane, Hobart and Adelaide) still have a $200,000 buffer between the median value of their city and Australia attracting first home buyers and investors from across the country.

“These top three ranked cities attracted an elevated population growth against the Australian average in 2021 and this was felt most in the rental space, given many people moving to a new area tend to rent before making a purchase.”

City house prices, as opposed to world prices, are rising on average by 11.5 per cent per annum, the fastest rate since quarter three 2004.

An astonishing 94 per cent of cities saw prices increase over the latest 12-month period, up from 85 per cent a year ago.

Turkish cities Istanbul, Ankara and Izmir filled the top three spots on the residential cities index, with prices more than doubling in each location.

Rounding out the top ten ahead of Brisbane, were Halifax, Phoenix, Miami, San Diego, Dallas, and Hamilton.

Unlike in Australia, city house prices globally are outpacing their national markets, registering growth of 10.3 per cent.

“Much maligned during the pandemic as the ‘race for space’ story took hold, the dynamism of cities is reasserting itself,” the Global Residential Cities Index report stated.

“But the market cycle is shifting as large parts of the world move from a pandemic to post-pandemic landscape.

“Inflationary pressures are surging, and the cost of debt is increasing as interest rates track higher.

“Set against this backdrop of heightened uncertainty, rising taxes and more property market regulations (e.g., a ban on foreign buyers in Canada), we expect the rate of price growth to slow in most markets but we think a sudden shift to negative price growth is unlikely for most cities in 2022.”

Amidst the property profits being generated around the world, it is worth sparing a thought for the vanquished.

Unfortunately for Peru it’s been a forgettable year in property and on the pitch.

As well as losing an agonising football game to Australia to miss the World Cup, they ranked fourth last among the 150 cities with property prices retreating by 3.0 per cent, above only Venice, Genoa, and Rabat in last place with a price fall of 6.3 per cent. 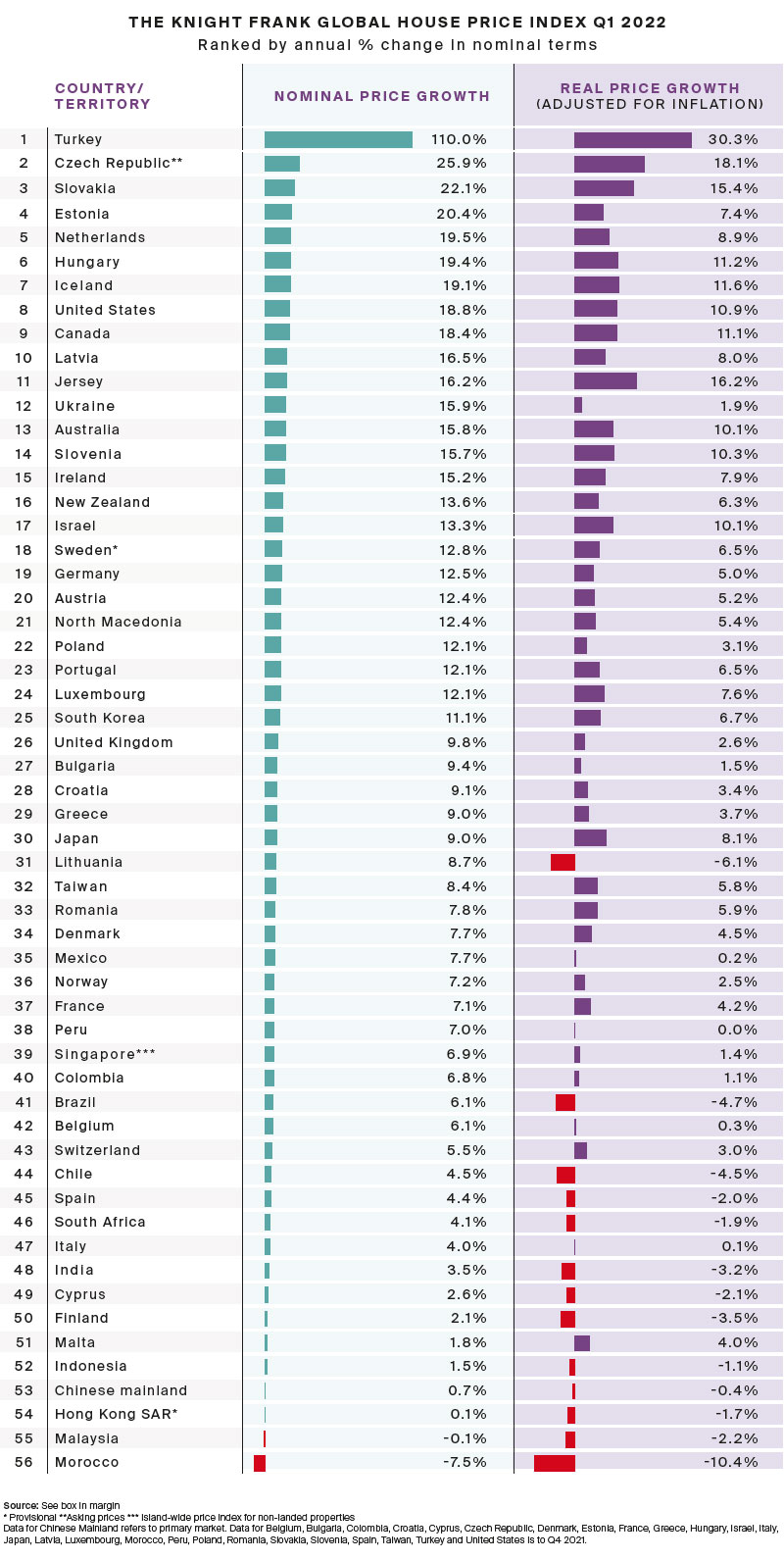