A new report has identified 20 Australian house and unit markets where strong capital growth is extremely likely in coming months, with the nation’s next property hotspots scattered right across the country.

A new report has identified 20 Australian house and unit markets where strong capital growth is extremely likely in coming months, with the nation’s next property hotspots scattered right across the country.

The latest report included 14 metro locations and six regional suburbs across all eight states and territories, while of the 20 locations, 12 were unit markets and eight were detached house markets.

The report defines inventory levels as the amount of time it would take to sell all of the houses or units in a particular location if they kept selling at the current rate and no more supply was added to the market.

Median asking prices differ from median dwelling values in that they are the median for-sale price of all the properties listed for sale in each location.

“Inventory levels is a really important leading indicator, because it tells you whether the balance between supply and demand is trending in favour of vendors or buyers,” Mr Spencer said.

“That’s one clue as to how prices are likely to move in the months and years ahead.

“When you look closely at changes in days on market, you also get an indication of what might happen to prices in the future.

“When days on market are trending down, it tells you buyers are being forced to fight harder for properties, which puts upwards pressure on prices.

“All of this translates into asking prices. When vendors feel the market turning in their favour, they start increasing their asking prices.”

Australia’s most likely market for medium-term price growth, according to the Green Shoots Report, is Mount Johns, located on the south side of Alice Springs.

Inventory levels have fallen by 64.3 per cent in the last three months, while at the same time average days on market in Mount Johns reduced from 99 days to 78 days.

Mr Spencer said while the median asking price remained unchanged over that period, he believed it was likely to rise in the near future.

Census data shows the population of Mount Johns grew by 21.9 per cent between 2011 and 2016, with 19.4 per cent of homes in the suburb owner-occupied.

Oxley Park in Sydney’s west is showing the strongest signs of any unit market across the country for price growth, the report said.

Over the past three months inventory levels have declined by a third, while days on market have shrunk from 52 days to 42.

Median asking prices rose by 5.1 per cent in the quarter, a trend that Mr Spencer said was likely to continue.

Another unit market in line for a rapid price rise is picturesque Rainbow Beach, a tourism hotspot located in the Gympie area on Queensland’s Sunshine Coast.

The report found inventory levels have plunged from 6.1 months to 3.4 months, while days on market have fallen from 157 days to 115.

Unit asking prices are already on the up in Elermore Vale, with the report suggesting that price growth was likely to continue.

Inventory levels fell by 45.4 per cent over the past three months, with days on market steady at just 24 days.

Units in beachside Glenelg in Adelaide have a bright future, with all leading indicators identified in the report pointing towards price growth.

Inventory levels fell from 4.7 months to 3.1 months in the last three months, with days on market falling by 15 per cent to 43 days.

Mr Spencer said it appeared that vendors had already started sounding out that price growth potential, with the median asking price for Glenelg units rising to $485,000, from $445,000 three months ago.

Located on the outskirts of Adelaide in the City of Onkaparinga, Hackham was identified as Australia’s number two housing market for potential price growth.

Just 3.3 months of housing inventory remains in Hackham, with days on market down 10.3 per cent over the past three months.

WA’s most promising property market is units in coastal Rockingham, in Perth’s southern suburbs, according to the report.

Mr Spencer said the potential price positivity for Rockingham units was underpinned by a sharp drop in inventory, which fell from 6.1 months’ supply to 3.8 months in the past quarter.

Located around 20 kilometres from Perth’s CBD, Madeley lays claim to having the strongest prospects for capital growth of any housing market in WA.

The report showed inventory levels had fallen sharply from 5.6 months’ worth of supply three months ago to 3.3 months, while days on market have fallen by 5 days, to 60 days.

Median asking prices rose 1.8 per cent over the period, an indicator that stronger price growth is likely to follow.

Around 20 kilometres northwest of Adelaide’s CBD, coastal North Haven’s market for detached houses is in line for an uplift.

Median asking prices rose by 5.7 per cent over the last three months, with days on market falling to 23 days, from an already low 29 days.

Inventory levels plunged by 31.9 per cent over the quarter, with those combined indicators illustrating strong potential for rising values, the report said.

Situated on the northern Gold Coast, increasing demand for Hope Island units is likely to result in solid price growth in coming months.

The report showed inventory levels fell by 40 per cent in the past three months, while days on market sit at 73 days, down 11 per cent over the period.

Increased buyer competition is putting upwards pressure on house prices in Pooraka, located around 12km north of the Adelaide CBD in the City of Salisbury.

Days on market fell by 12.5 per cent to just 28 days over that time, the report said.

Houses in Modbury North in Adelaide’s City of Tea Tree Gully council area have increasingly strong prospects of price growth, according to the Green Shoots Report.

Inventory levels have fallen to 3.3 months’ worth of supply, while it takes an average of 30 days to sell a house in Modbury North.

Mr Spencer said vendors had taken notice, with median asking prices rising by 3.5 per cent to $438,700 over the quarter.

Located on the shores of Moreton Bay, Wynnum has become a desirable location for owner-occupiers and investors alike.

The report showed inventory levels nearly halved over the last three months to 6.7 months, while days on market fell by 10.7 per cent to 67 days.

Unit prices in Canberra’s Florey, located near Belconnen, are on the march upwards, with the report showing that growth looks set to continue.

It would take less than a month to clear out the remaining inventory in Florey if no new units or apartments were added to the market, with the average sale taking just 24 days.

Also providing the foundation for a rapid rise in value is surging momentum in asking prices, which rose by 7.9 per cent over the past three months to hit $463,000.

Around 36km south-east of the Melbourne CBD lies strong potential for unit price growth, with leading indicators lining up in Carrum Downs.

Mr Spencer said a plunge in inventory levels was the most compelling evidence of a potential rise in unit values, with 3.1 months’ worth of supply available in the suburb.

It currently takes an average of 26 days to sell a unit in Carrum Downs, while the median asking price was steady over the quarter at $480,000.

House prices are set to pick up in the southeastern suburb of Seville Grove in Perth, the report said.

Located close to Perth’s picturesque Hills Region, median asking prices for Seville Grove houses rose steadily over the past three months, from $326,450 to $355,000.

Mr Spencer said that was due to a plunge in inventory levels, with just 3.5 months’ of supply remaining, while days on market fell by 11.3 per cent to 47 days.

Located around a 30 minute drive from Melbourne’s CBD and about halfway between Melbourne and Geelong, Werribee has become a desirable lifestyle location in recent years.

While Mr Spencer said asking prices for Werribee units remained steady at $400,000 in the quarter, the prospects of price growth were nonetheless strong.

Days on market fell by 30.9 per cent to an average of 47 days over the past three months, an indicator of rising competition among property buyers.

Inventory levels also dropped sharply, falling by 30.7 per cent over the quarter to 3.7 months.

Around 45km from the Sydney CBD in the western suburbs is St Marys, with leading indicators suggesting that capital growth in units is just around the corner.

Inventory levels plunged by 36.9 per cent over the last three months, while days on market were steady at 28 days.

Median asking prices are already on the rise, going up 3.3 per cent to $499,000, but that value proposition is likely to attract more buyers and place more upwards pressure on prices.

House price growth is looking like an increasingly likely proposition in Carlton, Tasmania, a semi-rural centre located near Hobart.

Buyer competition is on the rise in Carlton, with median asking prices rising $10,000 in the past three months and inventory levels at less than a month’s worth of supply.

It currently takes an average of 23 days to sell a house in the suburb, the report said.

Rounding out the top 20 Australian markets for capital growth potential is the unit market in Melbourne’s beachside suburb of Sandringham.

Median asking prices rose 1.7 per cent in the quarter to $700,000, but Mr Spencer said inventory levels falling to just 4.1 months’ of supply would be the main factor behind future price growth.

Days on market were steady at 31 days over the period, the report said. 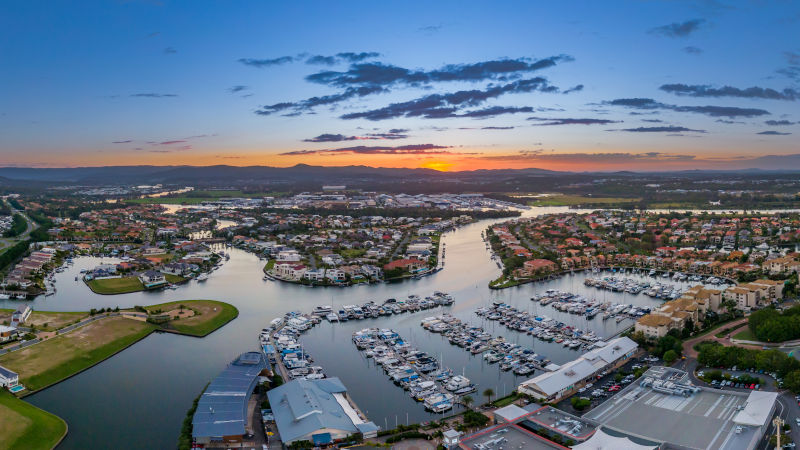 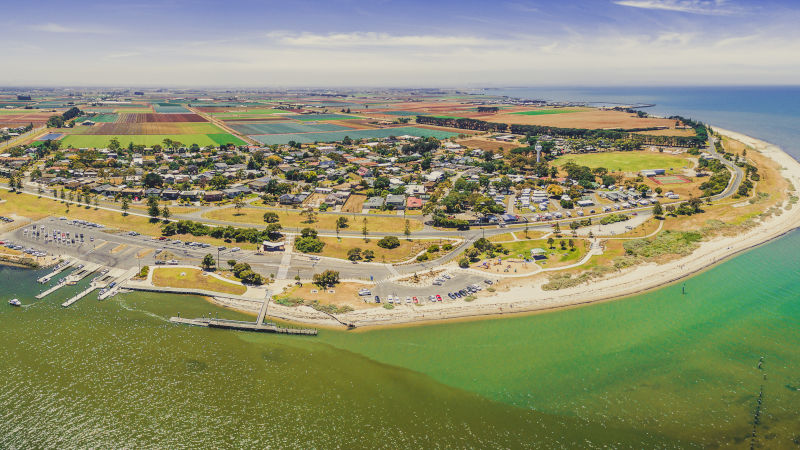 Lifestyle factors are attracting droves of buyers to Werribee, with prices expected to rise quickly in coming months. Photo: Shutterstock