Will it be rents to the rescue for investors as banks hike rates?

The big four banks wasted no time passing on the full quarter of a per cent home loan rates rise but the impact on property prices and investors remains unclear.

The big four banks, who account for roughly three quarters of all mortgages in Australia, wasted no time passing on the full quarter of a per cent home loan rates rise after the Reserve Bank of Australia (RBA) upped the official cash rate.

CBA, Westpac, NAB and ANZ will implement their rate rises between 13 and 20 May, hitting the hip pockets of new and existing borrowers.

As of the weekend, 24 of the almost 100 lenders in Australia had announced they would pass on the RBA rate rises to borrowers. A further 71 providers have not yet announced whether they will or will not be passing on the rate increase of 0.25 per cent.

Investors and property owners now face the stress of higher mortgage repayments, dilemmas about whether to refinance, and the uncertainty of what it means for the property market.

It was soaring inflation that is already hitting consumers struggling with stagnant wages that forced the RBA’s hand in lifting rates for the first time in more than 11 years.

With the Sydney property market already retreating and Melbourne’s flatlining, the prospect of property prices falling as borrowing costs rise is real.

The risk, or apparent inevitability, of further interest rate rises has raised the spectre of increased home loan delinquencies.

Ratings agency Moody’s Investors Service said rate rises would weigh on the property market as borrowers in financial trouble find it harder to sell their properties at high enough prices to repay their debt.

But NAB has said it expects borrowers to manage, with more than 90 per cent of its customers having excess borrowing capacity. Just 30 per cent were less than one month ahead on their repayments, with the average customer 22 months in front.

The new big four average standard variable interest rate will be 4.76 per cent, adding an additional $71 a month to a $500,000 mortgage.

For savers, the news was better unless a client of CBA, which was the only major bank not to lift its deposit rate.

While the smaller capital cities continue to experience solid capital gains, the national market is being dragged down overall by the two biggest capitals.

Most banks and economists are predicting national falls of around 10 per cent in property values but it wasn’t a unanimous outlook.

Market share of the leading mortgage lenders
In Australia from 2020 to 2021, by value of gross lending 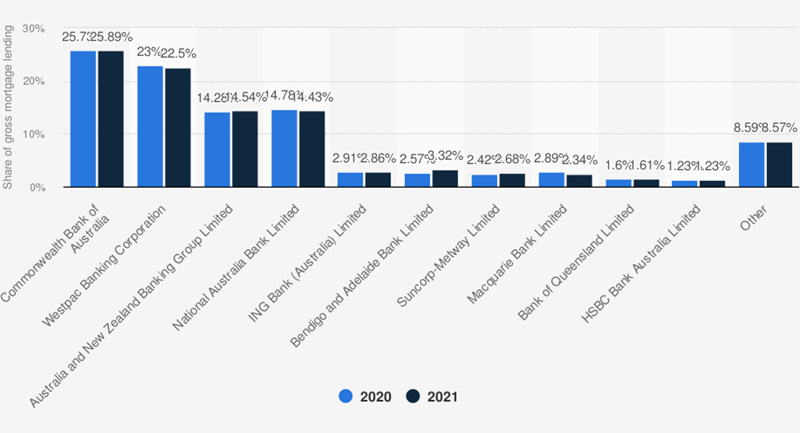 Rent to the rescue

“Looking at the recent history of RBA tightening cycles, we can see that property prices had increased three of the past four times, over the 12 months after the end of the rate hiking cycle.

“In 2009, house prices were relatively flat after a 1.75 per cent cash rate increase over 13 months.

“The only fall in house prices came back in 1994, when they dropped 2.3 per cent after a 2.75 per cent rates increase over six months,” Mr Vaibhav said.

He added that rents have been rising across the country over the past 18 months and are up over 10 per cent in the past year.

“For property investors who earn income from rent, this goes a long way to offset any increase in interest rates.

“With vacancy rates at record lows across the country, pressure on rents remains high, and this should help insulate investors from further interest rate pressure.”

Knight Frank Australia Chief Economist Ben Burston said the RBA decision signifies its intent to manage inflation expectations over the medium-term and regain control of the policy narrative through a series of cash rate increases in coming months.

“The prospect of a series of rate rises in Australia and globally is impacting sentiment asset markets, most notably in equity markets, however, core property will still fare relatively well in this environment and the accelerated timing in response to the upside surprise on inflation has simply brought forward the adjustment that investors had been anticipating for some time,” he said.

Rents nationally are attracting higher yields as vacancy rates hit record lows, including Queensland, which was last week described by the Real Estate Institute of Queensland as being a rental crisis.

“This dynamic is continuing to attract institutional and private investors to property, especially to higher-quality assets offering strong income returns with the ability to quickly adjust rental flows in keeping with changes in inflation,” Mr Burston said.

“In office markets, the economic recovery and a buoyant labour market are driving a recovery in tenant demand and reducing the uncertainty that clouded the market during protracted lockdowns and this improvement in sentiment is currently outweighing concern over rate rises.”