Data from Urbis’ latest Apartments Essentials report placed Brisbane as the third most-active apartments market in Australia for the first three months of 2021, behind Gold Coast and Perth where sales activity trended well above historical levels.

Brisbane-based Urbis director Paul Riga said while the 277 apartment sales in the March quarter was well below the market’s historical peaks, there had been a changing landscape in buyer behaviour.

Mr Riga said one-bedroom apartments had fallen out of favour, with the vast majority of sales being for two and three-bedroom products.

“The mix has gone from a one and two-bedroom dominated mix in 2015 and 2016, where we saw 10 per cent of the product selling being three bedrooms, to now where we are getting a much larger proportion of larger twos and three bedrooms selling in the market,” Mr Riga told Australian Property Investor Magazine.

“Ultimately that’s pushing weighted average sales prices to the extent that in the most current quarter, the weighted average sat at $830,000 for the 277 sales that were made, where historically that average was around the $600,000 mark because of the one and two-bedroom mix that was selling at that point in time.”

Mr Riga said developers were responding to the sales trends accordingly, evaluating their product mix, prioritising boutique projects with bigger apartments and changing the order of how they were initially thinking projects would come to market.

“What we are also seeing is the product itself within certain projects is changing,” he said.

“The applications that we monitor, as an example, in 2016, our three bedroom mix that we were capturing was about 11 per cent of the market with ones and twos taking up the remainder.

Investors, Mr Riga said, were following owner-occupiers nearly in lockstep, with a strong preference for apartments with more than one bedroom.

“Their preference for what they are looking at has changed, but how long that will continue for is probably the big question,” he said.

“Based on our demographics, the one bedroom market is still an affordable rental proposition and is still a necessary typology, because we have a younger demographic who doesn’t necessarily need two bedrooms or have the funds to occupy a two-bedder.

“Share housing isn’t necessarily always the easy solution either, so the one-bedroom product is still something that demographically is there, it’s just at this point in time the rental market is working in the same direction as the owner-occupier product, they are looking more at that two-bedroom stock.”

With developers focusing on prime sites near amenity and the city’s riverfront, Mr Riga said investors would be well-served by continuing to follow the lead of owner occupiers.

“Key locations, be it riverfront or in strong precincts where owner-occupiers generally want to be or aspire to be, that’s where the buyer activity has been,” Mr Riga said.

“But again, the projects have been more boutique in nature, you’re getting one apartment per floor and that’s been the mix.

“At the end of the day, it’s really going to come down to having a product that has a point of difference and one that appeals to multiple buyers.

“We always say quality tends to rise to the top and that hasn’t changed in this perspective.

“When we look at product that’s done well in this market from a rental perspective, it’s typically the product that has strong levels of internal amenity, it has been developed and designed in a way that can attract an owner-occupier and not just be a rental product, it’s somewhere where people actually want to live.

“A quality location, quality design and a quality development makes a big difference.”

Looking forward, developers' future pipelines point to a potential shortfall between supply and demand, firming up the prospects for investor gains.

Mr Riga said Brisbane’s value proposition as compared to the bigger capitals of Sydney and Melbourne also placed the city on solid ground.

“That may change for 2023 because a few more projects may get up in that period, but we are not talking numbers that cater to a market where we are seeing growing demand, and a lot of that product is boutique, two and three bedroom apartments.

“So from a renter’s perspective, you’re not seeing a lot of investor product coming to market.

“The rental market will get tighter on the basis of the fact that there are strong drivers of demand and a lack of adequate supply.

“Looking very simply at those factors, it suggests that there is upside from an investor perspective.”

In Sydney, the continuing absence of international students has shifted developers’ attention away from the city’s traditional apartment hotspots.

Urbis associate director Alex Stuart said the off-the-plan market was particularly challenging for Sydney-based developers, with 54 per cent of the stock currently selling being in completed buildings.

Mr Stuart said while the wider housing market in Sydney had been buoyant across the board in recent months, it was a tale of different areas within the city for apartments.

“At the top end of the market developers are targeting downsizers, and suburbs towards the inner areas of Sydney have done quite well, and the outer locations that have been able to tap into the first homebuyer market have done better, relatively speaking,” Mr Stuart said.

“With international students still locked out of the country, the rental market in some of those locations is a bit more challenging at the moment.

“There are vacancies in properties particularly around the inner areas of Sydney around the University of Technology Sydney, Parramatta and Macquarie Park, some of those locations which have been hotspots for apartment development.

“There has been a bit of supply coming online in the past few years and obviously with the hit on the demand side it has impacted the performance of those locations.”

Against that backdrop, Mr Stuart said the market was self-regulating and future supply was trending downwards, while like Brisbane, Sydney-based developers were targeting the owner-occupier set.

But that’s not to say that there aren’t opportunities for investors, however.

“There are pockets within Sydney where the supply is low, the inner west areas of Sydney and the eastern suburbs and Lower North Shore, we have seen relatively lower levels of supply in those pockets,” Mr Stuart said.

“I think there are probably more opportunities in those areas than in some of those previous hotspots that have centred around the university campuses and the key commercial centres within Sydney.

“In that regard, I think the key is finding a good project in a good location.” 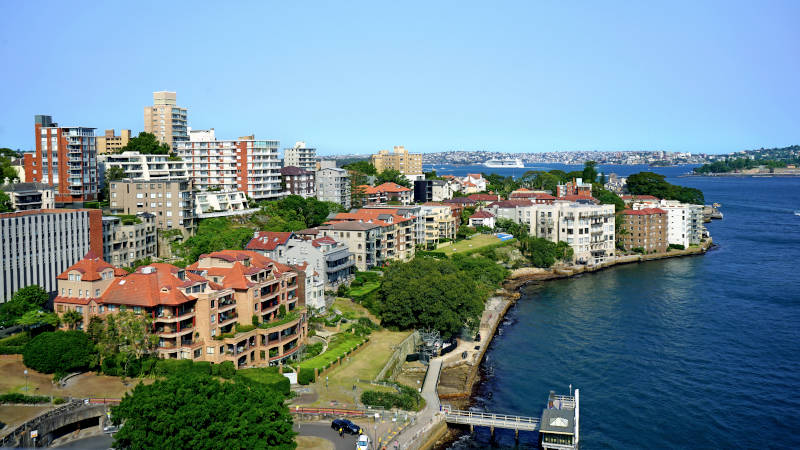 Investors would be well-served by exploring opportunities for apartments in Sydney's harbourside suburbs. Photo: Shutterstock