By Craig Francis, Editor
| 13-9-2021 | Investor In Focus | 5 min read
Sunil Kumar's path to property success has been a human embodiment of the theme behind the Paul Kelly classic, From Little Things, Big Things Grow.

In 2004, Sunil Kumar arrived in Australia with only the most basic knowledge of the English language, but he didn’t let that stop him from harbouring some fairly audacious ambitions.

And while the Indian migrant described moving to a new country accompanied by no friends or family as a daunting experience, he said the challenges associated with setting up a new life were crucially important in shaping what would become his future success.

His first job in Australia was what many would consider to be among the most difficult and least rewarding occupations - Mr Kumar was going door-to-door and selling telephones.

“It was hard work, tiring, but I never gave up and to be honest, I think it is those days of sweat and toil that laid the foundation for dreaming big and that taught me perseverance,” Mr Kumar said.

Those big dreams have now turned into a lavish reality for Mr Kumar, who manages a successful Melbourne real estate agency with more than 100 staff, while his personal property portfolio is worth close to $10 million.

His memoir, From the Ground Up: 7 Principles for Building a Business Fast, was published earlier this month.

Like his arrival in Australia, Mr Kumar’s Reliance Real Estate started small in 2011, with just two employees - an inconspicuous beginning for what is now among Victoria’s fastest-growing agencies.

Just one year prior, Mr Kumar was working as a real estate agent for another firm and had made his first foray into property investing, buying a house and land package that was part of a development he was selling on behalf of one of his clients.

“I sold five properties in that street when the government grant incentive was $32,000, and I bought one directly from my builder client,” he said.

“I was single at the time and I had a broker working with me who financed homes and he financed this purchase for me from NAB.”

He has since bought and sold multiple properties, including major commercial projects and property developments, culminating in his current portfolio of prestige properties.

The jewel of his portfolio is a $6.5 million property in Tarneit, in Melbourne’s City of Wyndham, while within the same local government authority are two properties in Point Cook, worth $2 million and $1.2 million. The latter is his residence.

While his current residential holdings may suggest otherwise, Mr Kumar said diversification was a key to successful investing.

“To reach this point, I have personally invested in residential, commercial and long-term land holdings and I think especially at this time, we know it’s very important not to put all our eggs in one basket,” he said.

“One of my clients acquired 22 residential properties but land tax, council rates and other maintenance costs increased and negative gearing changed and really affected him adversely.

“He slowly sold 16 of those properties and invested in commercial properties to get the fixed return.

“I recommend investing in all different areas, with residential and commercial the most common and secure.

“Really think of the long-term plan; are you buying for capital growth or rental return and only once you’re clear on the desired outcome do you make an informed decision.”

Mr Kumar said his own strategy had focused on commercial property to collect strong rental returns while keeping liability to a minimum.

Capital growth investments in residential had performed strongly, while a couple of major development sites generated a high rate of return on investment and capital growth at the same time.

He has tried a variety of lenders and sees diversification as equally important with credit as it is selecting investment sites.

“When investing in residential and commercial, the four major banks have supported my purchases but I once invested in a major project requiring a long-term loan holding and had to go for a second-tier lender,” Mr Kumar said.

“For another of my short-term projects we had to get finance from a private lender, which can be expensive.

“My personal preference is not to finance all properties from one bank and to make sure you have a couple of different lenders.”

Back from the brink

A natural progression of his real estate agency was starting Funding Force, which provides a platform to Reliance’s agents and a ﬁnancial service to clients.

“Innovative, savvy brokers with outstanding long-term client relationships means higher traffic and visibility for both brands and it was driven by demand from our clients,” he said.

“We were referring our clients to ﬁnance services, and they were not getting a good experience.”

All of his own investments are now managed through Funding Force.

“They make all the decisions about leasing and renting, renewals — I hardly get involved.”

The path to financial security and business success has not always been easy, with 2012 seeing him on the brink of closing the business as market conditions worsened.

“That was a difficult year — I was faced with the decision to give up my company and the only thing that got me through was the support of my family and the positive influence of my peer group,” Mr Kumar said.

Further personal sacrifices had to be made when investing in a major land holding.

“I had to make considerable lifestyle changes, refrained from spending money on cars or other luxuries, and also had to pull some money away from the business, but it ultimately paid off many times over,” he said.

There are, of course, additional investment plans in the pipeline.

“There are two major projects we are developing; one is a residential subdivision of 82 lots that we will subdivide and sell, keeping at least 10 per cent for the rental return, and the other is a major commercial office site that we will also develop, sell and lease,” he said.

Buoyed by his own experience in starting small and building relatively quickly, Mr Kumar said those looking to make a start in property investing should begin modestly.

“If there are limitations with money, start small but at least make a start to the journey,” he said.

“I bought my first home for $300,000 and within three years had refinanced with cheaper rates and raised $90,000 from equity, which I used in my business to grow and expand.

“If I didn’t invest that original purchase amount, I don’t think I could have saved $30,000 a year for three years.

“It’s a real advantage, and a no brainer decision to buy and let property grow.” 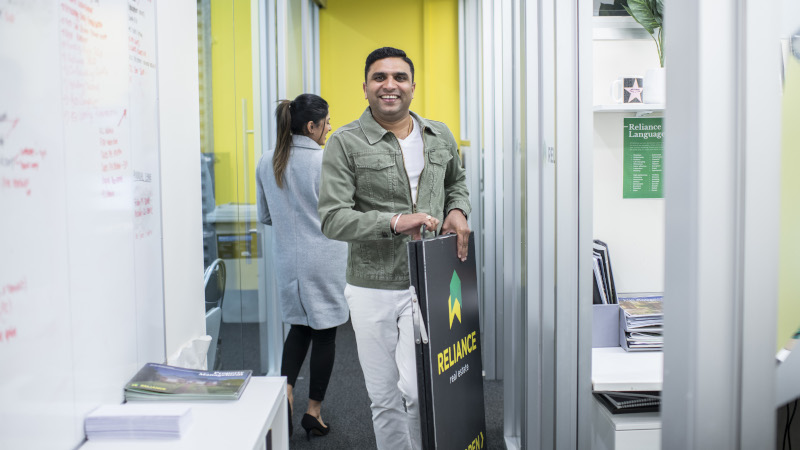 Diversity in asset types has been another key element of Mr Kumar's investment success.