Her comments about the market in Karratha were echoed by the general mManager of Crawford Realty, Brett Philp, who described a similar scenario unfolding further inland in the town of Newman.

“We're achieving prices not seen since 2013 and the subsequent tapering off of the mining boom, and vacancy rates are extremely low as workers return to live in the town and companies move away from the FIFO model,” Mr Philp said.

One of the largest regions in Western Australia, the Pilbara covers more than half a million square kilometres of unique natural landscape. The Pilbara's economy is dominated by mining exports and petroleum export industries, including iron ore and gold.

Marble Bar has the dubious distinction of laying claim to the hottest place on earth. But the heat now is centering on the revitalised mining sector and surge in local property and rent prices.

“COVID has actually been a positive for Newman, with the ban on interstate travel and recent intrastate travel restrictions making it more enticing and practical to live locally rather than travel for work,” Mr Philp said.

He estimated the median property price in Newman had risen by around 15 per cent in the past year and a lack of supply meant demand would continue to be strong.

“Of 370 managed properties, we have about ten rentals available, while sales continue to soar.

When the mining boom imploded around 2014, the value of properties in the Pilbara fell by as much as 75 per cent.

As new projects and construction arcs up again, the impact on the property market has been swift and compelling.

According to the Real Estate Institute of Western Australia, five of the state’s top 10 suburbs in terms of median house price growth in the last quarter were in Karratha.

The coastal suburb of Bulgarra topped the list (33 per cent), with Millars Well, Nickol, Pegs Creek and Baynton claiming spots three to six on the list.

Karratha-based Ms Guillesser said the Pilbara, particularly Karratha, Dampier and Point Samson, Tom Price and Port Hedland, were all great places to invest, with return on investment being much stronger than most areas in Australia.

“It is the locals that are trying to get into the market place — faced with a moratorium on rent freezes ending in October, most tenants are looking at rents increasing from $50 a week up to around $200 a week,” Ms Guillesser said.

“With the current incentives on offer to buy, including first home buyer grants and HomeBuilder grants, locals have decided it is cheaper to pay a mortgage than rent, and fear being caught in the rental spike when the market tightens even more.”

In a more highly regarded suburb, newer homes in Baynton are keenly sought after due to the school catchment zone, with 4x2 homes with pools renting in the $1000-$1300 per week price range.

More than 7,000 workers ordinarily fly into WA resources jobs and fly out when their shift is over, but this all set to change, and Pilbara property is set to benefit.

BHP is shifting much of its interstate FIFO workforce to WA in the face of the state's border restrictions, requiring new operational employees to live in the state or be willing to move there.

“I believe we should have a strong six months at least given all the jobs and developments on the board for the area, and with the hard border the big mining companies are looking to employ locally, which has always been what the towns want to actually keep the money in the area,” Ms Guillesser said.

In Newman, Mr Philp said mining companies were now looking at ways of minimising their FIFO workforce and encouraging people to live where they worked.

“There are a lot of mental health issues around FIFO, with families separated for much of the workers’ rosters.

“Newman has a strong sense of community, it’s safe, there’s sport and artistic endeavours to pursue, and small businesses are also in a really healthy position and a lot of older commercial spaces are now also filled, so the attractions of living locally outweigh the usefulness of FIFO,” he said. 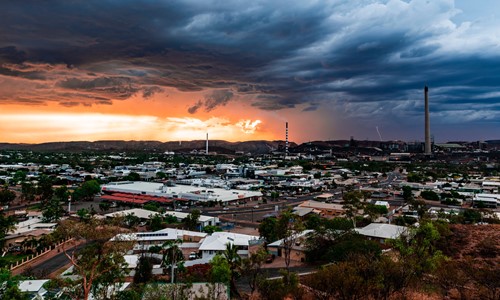