The 40-year-old owner and operator of Oscar’s Liquor in Seven Hills recently snapped up a two-bedroom apartment in Civic Properties’ $250 million planned community ‘The Hills Village’ in Seven Hills.

“I was born and bred here in Seven Hills and still live here with my own family. Over time I have seen significant changes in the area – and most recently this has been the development of The Hills Village. I can see how this will totally reposition the suburb and attract new people to live here,” Oscar said.

“For us the location was critical to our decision. The Hills Village is set to become a new community hub – it is in such close proximity to schools, daycare centres and of course the train station. Anybody would want to live there, from young couples working in the city to families and through to older people wanting a low-maintenance lifestyle.”

While the Semerci’s children are currently just five and eight years old, it hasn’t stopped them from planning for their future as empty-nesters.

“We really like the design and the facilities and can even see ourselves moving into the apartments in the future when our kids have grown up,” he said.

Mason Apartments, a 138-apartment building over six levels was launched by privately-owner developer Civic Properties in 2017 as the second stage in the new Hills Village Community. It is now nearing completion with remaining apartments available for sale priced from $480,000 to $700,000.

When complete in 2020, The Hills Village will be the first planned community in Seven Hills with 400 plus apartments to be delivered across four separate buildings. It will feature extensive landscaping, community facilities and resident facilities such as a private resident-only use gym.

According to Sahil Sapra of Laing & Simmons Seven Hills who sold the Semerci’s their apartment, a range of buyers have been drawn to the new development including owner-occupiers and investors – with investors particularly drawn to the prospect of getting into a large project early.

“Savvy investors see the potential growth to be realised in Seven Hills, as the next logical step from the rest of the Hills District. This is also the second stage of the Hills Village, and with every stage prices will go up so investors have been keen to get in early to capitalise on this growth,” Mr. Sapra said.

Mason Apartments at The Hills Village is located at 1 – 11 Olive Street in close proximity to Seven Hills train station with easy access to major arterial roads including M2, M4 and M7, with major business centres including Parramatta CBD and Norwest Business Park also nearby. The Hills Village is also surrounded by Blacktown creek, parklands and shopping centres, as well as public and private schools.

Find out more about The Hills Villiage, here. 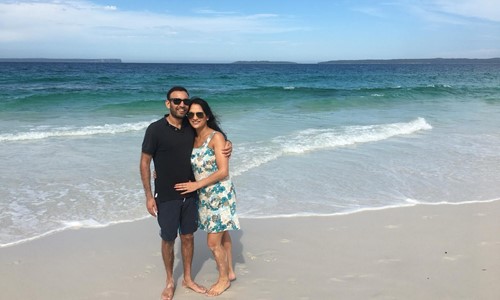