would certainly be patting themselves on the back for a job well done.

But for those who missed out, research by Ray Whi…

With median house price growth of nearly $2 million since 2012 - and around $1 million in the last 12 months - investors who got in early in the idyllic seaside town of Byron Bay would certainly be patting themselves on the back for a job well done.

But for those who missed out, research by Ray White chief economist Nerida Conisbee shows there are certain fundamentals investors should look at to get in on the ground floor of Australia’s next beachside growth hotspot.

“There is a lot to like about Byron Bay but many features certainly aren’t unique,” Ms Conisbee said.

“It has beautiful beaches, low rise development and a laid-back retail core.

“It has never been a particularly cheap town to buy in but what is unique is how quickly it has grown to global prominence and how quickly prices have risen as a result.

“So, with so many people now priced out, where could be the next Byron Bay? Do you need a Hemsworth to take the title?

"And can you use a numerical approach to do the analysis or is there something mystical about Byron’s popularity?”

Ms Conisbee said investors would be well-served to consider the following characteristics when trying to predict which beachside town would emerge as the next Byron Bay.

While she said prices were on the way up, Yamba’s median of around $750,000 nonetheless represented good value for investors or owner occupiers, while the town also held similar appeal to Byron.

“It also has a lighthouse, has regular farmers markets and what looks to be a lively main street, which makes it already very Byron Bay-like without too many adjustments required,” Ms Conisbee said.

Ray White Yamba principal Daniel Kelly said the Yamba market had quickly shifted from predictions of a price crash at the beginning of the pandemic to emerge  as a potential hotbed for capital growth.

“People now appreciate their homes more than ever, and where you live has become incredibly important in terms of lifestyle,” Mr Kelly said.

“With Yamba being the quiet and relaxed coastal town that it is, this has become incredibly attractive to buyers in the market who have quickly realised that having outdoor surroundings that you can enjoy in your downtime is really important.”

Mr Kelly, a born and bred Yamba local, said the future outlook for the coastal area was also very positive in his eyes.

“The geography of Yamba being surrounded by national parks and the river means that we can't physically be over-developed,” he said.

“We are also positioned just close enough to metropolitan areas where holidaymakers can enjoy the area, but not so close that they can overwhelm the area to the point that it is detrimental to the character of the town.

“We are still considerably more affordable than areas such as Byron Bay that we are constantly compared to, but we are also very different to those areas. There are certainly some similarities, but the Yamba boy within me says that Yamba is always going to be Yamba, and not 'another Byron Bay'.”

Victoria’s Cape Woolamai on the southern tip of Phillip Island is another pick, with its popular surf beach and attractive main street complemented by a relatively affordable median price of around $700,000.

But with demand steadily on the rise, Ray White Phillip Island agent Yvette Tancheff said sellers’ high price expectations were being met by the market.

“Prices are on the increase due to a shortage of available stock and fierce competition between large numbers of buyers hoping to secure a property,” Ms Tancheff said.

“The outlook for Cape Woolamai is very positive as more people are becoming aware of the beautiful environment on offer as well as the good infrastructure in place compared to some of the similar sized suburbs on the island.

“I believe there is a great opportunity for growth, particularly when some of the original older homes are snapped up and buyers then rebuild an architecturally-designed home.”

In Queensland, Ms Conisbee said Palm Cove in the tropical north of the state also made her list of potential growth accelerators, with its median price of less than $800,000 appealing.

“It has a nice beach, a lot of great restaurants, and you can take your dog anywhere, even on the beach,” Ms Conisbee said.

“There doesn’t appear to be a lighthouse but there is a market that is regularly held along the beach.

“And being so far north, it does provide nicer weather when southern states are cold.”

Rounding out the other states, Ms Conisbee’s picks were Robe in South Australia, Dunsborough in WA and Penguin in Tasmania.

“Robe is relatively affordable with a median of $435,000 but has seen almost 20 per cent price growth over the past 12 months. It has nice beaches and an historic town centre and sounds like a pretty relaxed place to visit,” Ms Conisbee said.

“In Western Australia, the most appropriate town was Dunsborough, close to Busselton. It has a median of $670,000 with prices increasing by 10 per cent over the past 12 months. It has lots of nice beaches, shops and restaurants. As an added bonus, it’s close to Margaret River wineries.

“Penguin is on the north-west coast of Tasmania and is picturesque, has a beach and is still pretty affordable with a median under $450,000.” 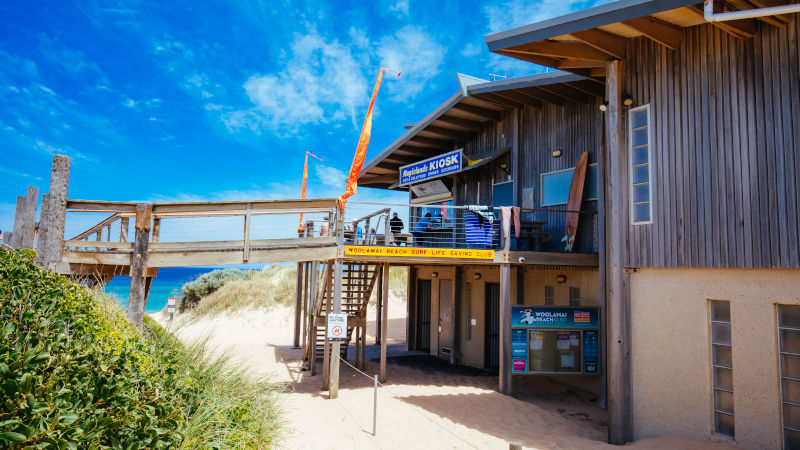 Cape Wooloomai's famous surf beach and its rustic charm add to its appeal as a lifestyle destination. Photo: Shutterstock 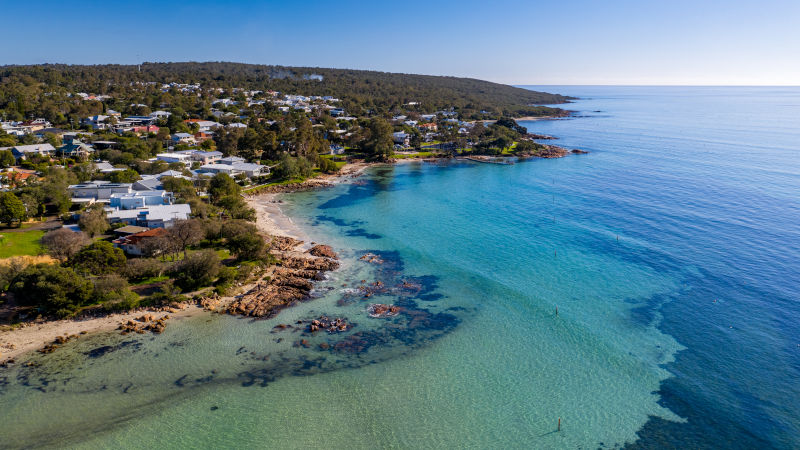 WA's coastal hamlet of Dunsborough is one of the state's premier holiday destinations, and property buyers are taking notice of its potential. Photo: Shutterstock