New research that analysed housing affordability through home loan serviceability has revealed some of the eastern states regions that still offer value and those to avoid.

By Craig Francis Editor
| 1-2-2022 | Residential | 7 min read
Wagga Wagga was found to be the most undervalued area in NSW.

With regional towns across the country approaching or even surpassing their capital city counterparts, finding affordable property in coastal towns and other regional centres has become difficult.

The value of housing in regional Australia recently rose to a yearly highs, with regional NSW the standout.

Even finding rentals has become problematic. Expensive and competitive rental markets are affecting locals and newcomers in regional areas Australia-wide.

Head of research at Propertyology Simon Pressley predicts private market rents will rise between $100 and $200 a week over the next year in 54 regional centres, including Bundaberg in Queensland, Geraldton in Western Australia, Victoria's Lorne, Mount Barker in South Australia, Burnie in Tasmania and Dubbo in New South Wales.

But in an uneven market, there are areas that have shot up to bubble-like price tags while other regions are deemed undervalued.

New research by InvestorKit that analysed housing affordability through home loan serviceability has revealed some of the eastern states regions that still offer value and those to avoid.

Based on the ability to make repayments on a loan, combined with market pressure analysis, Victoria’s most undervalued regions were identified as Geelong, Ballarat, Bendigo and Shepparton.

“Those willing to look beyond the capital city in Victoria will be pleased to find house prices significantly lower than the affordability threshold in the regions, with a strong outlook for the coming years in regional Victoria,” Head of Research at InvestorKit, Arjun Paliwal, said.

In March 2020, there were ten regional areas that were more expensive than the capital city with the lowest median, Perth. Since then, median prices in five regional areas have overtaken not just Perth but also Darwin and Adelaide. These are Hunter Valley, Ballarat, Bendigo, Latrobe-Gippsland and south-east Tasmania.

The other big change has been that there are now three regional areas that are more expensive than Melbourne – Illawarra, Sunshine Coast and Richmond-Tweed. Prior to the pandemic, there were none.

Sydney house prices are the most overvalued across NSW and the country.

The local property market is overvalued by 26.9 per cent - meaning house prices are 26.9 per cent higher than the average household can afford.

If home loan interest rates were to increase one per cent, to 4.5 per cent, the market would exceed the affordable level by more than a third (35.3 per cent). Interest rate shocks are likely to be felt more in markets this overvalued. 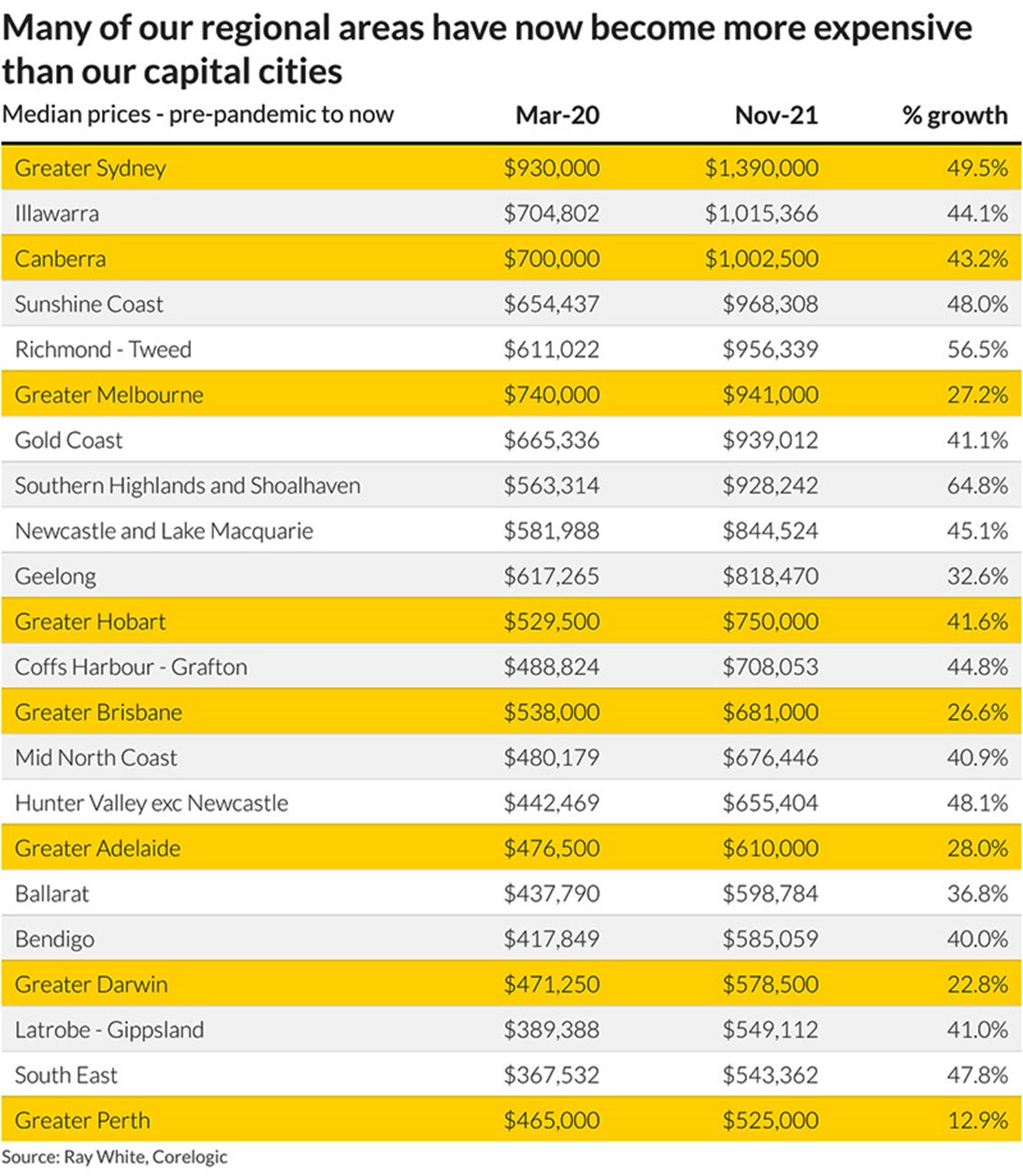 There’s been little respite for locals and first homebuyers looking for an alternative to Sydney’s stratospheric prices.

Mr Paliwal said the great migration during the pandemic saw Sydneysiders relocate to coastal and regional towns in search of more attractive lifestyles, with coastal areas experiencing price growth upwards of at least 75 per cent over the last decade.

“This has led to strong unaffordability in these local markets, however, it’s good news for those in search of a treechange with the regional areas of Albury-Wodonga, Wagga Wagga and the Lower Hunter found to be undervalued markets,” he said.

Wollongong clocked up a 132 per cent price-growth increase over the past 10 years – among the highest across NSW’s most populated cities. With its median house price $1.1 million, it has exceeded the local affordability level by 28 per cent, and 36 per cent at a 4.5 per cent interest rate.

Richmond Valley - Coastal – which includes the towns of Ballina, Brunswick Heads, Byron Bay, Bangalow, Woodburn, Evans Head and surrounds – is the most overvalued populated area in NSW and has a median house price of $1.12 million

Following a 99 per cent 10-year price growth, Kiama-Shellharbour's median house price ($815,000) is higher than the affordability threshold by 10.5 per cent, and would be overvalued by 20.7 per cent if the interest rate increases by one per cent.

Wagga Wagga was found to be the most undervalued area in NSW.

With a median house price of $415,000, it is 69.4 per cent lower than the affordability threshold, and by 50 per cent based on a 4.5 per cent home loan interest rate. Strong rates of sales growth are expected in Wagga Wagga due to the very low listings levels and high sales volumes. Over the past 10 years, it has seen a 53 per cent increase in property prices, with potential for further growth.

Albury-Wodonga's median house price ($456,813) is lower than the affordability threshold by 47.2 per cent. Sales market pressure in the area is extremely high, given the declining number of sales listings and rise in monthly sales volumes. As a result, strong rates of growth are expected.

“Albury-Wodonga started its boom prior the pandemic and it doesn’t look to be slowing down,” Mr Paliwal said.

“A strong local economy, strategic positioning of the city, local confidence due to the growth being seen over the years, all while still remaining affordable are all great signals for more strong years ahead.”

Property prices in the majority of Queensland’s most populated regions were found to be undervalued and sit below the local affordability threshold for an average dual income household. However, the Sunshine Coast’s Caloundra was found to be the only area where the median house price is overvalued, with prices 13.1 per cent higher than the local average household could afford.

Even Brisbane, which has enjoyed rocket-propelled growth, is deemed an undervalued market, with its median house price ($625,000) 25 per cent lower than the affordability threshold for local households.

“In good news for those looking to buy in Queensland, the majority of the state remains affordable and it’s predicted that many areas will also see strong growth in 2022, which is great for investors,” Mr Paliwal said.

While market pressure in the region is high – indicating short-term capital growth and rental price growth – property prices have only risen 0.5 percent over the past 10 years, this may allow for the upswing being seen to run for longer than most will anticipate.

The Gold Coast-Brisbane corridor of Ormeau-Oxenford experienced a price growth of 54 per cent over the past 10 years, but fortunately, house prices remain relatively affordable compared to south Gold Coast.

The median price ($677,000) is 9.9 per cent lower than the affordability threshold for local households, and 2.7 per cent overvalued based on a 4.5 per cent home loan interest rate. With the number of monthly sales listings and sales volumes both declining, Arjun said this could be a sign of market pressure relief.

The relative bargains abound elsewhere along the coast too.

“There has been a significant uptick in demand from investors to secure established shopping centres in regional Queensland, especially since COVID-19 shone a light on how resiliently these regional cities have performed,” Mr Feltoe said.