In the first three months of the year, the overall trend was vendor happiness increasing, with 42 per cent of sellers satisfied with the sales price achieved for their properties.

That satisfaction dipped in April, as physical distancing measures and general economic uncertainty associated with COVID-19 started to impact property prices across Australia.

Tasmanian sellers led the drop, with a 16 per cent decline in happiness, followed closely by Victoria and New South Wales.

RateMyAgent chief executive Mark Armstrong said Tasmania had been affected by a sharp drop in the number of investors from mainland Australia purchasing properties in addition to general economic headwinds, while demand for higher-priced Sydney and Melbourne properties dropped sharply in the crisis.

Metropolitan areas showed the biggest drops in vendor happiness, with declines of 10 per cent and 16 per cent in Melbourne and Sydney, respectively.

“Places like Melbourne and Sydney tend to be affected because they are top-heavy markets, particularly Sydney," Mr Armstrong told Australian Property Investor Magazine.

“They have a lot of real estate at that multi-million dollar level and if you have a lot of that property coming onto the market, demand at that sort of level isn’t as abundant as demand at the sub million level.”

While Mr Armstrong said the report showed the initial impacts of COVID-19 were not as severe as anticipated, he expected happiness to decline further in 2020 due to a number of factors.

“If you focus just on COVID, I think you could say the property market is holding up pretty well, given that April was probably the most uncertain month we’ve had during this whole pandemic,” Mr Armstrong said.

“One of the reasons the market has held up during COVID as well as it has is because of the lack of supply.

“In 2019, supply was already relatively low, we had a 20 per cent reduction in supply.

“That will be overlaid with the people who didn’t sell through March, April, May and June of this year because of COVID.

Mr Armstrong also said there had been a lack of distressed sales due to the pandemic, with those affected only selling their properties as a last resort.

"They stop holidays, they might sell their car, they will put interest payments on hold or refinance their loan, there are a lot of levers people will pull before they play that card and say ‘we’ve got to sell’.

"It takes a lot longer to play out than just a couple of months, particularly for homeowners.

RateMyAgent’s survey identified the ACT as having Australia’s happiest sellers, with 45 per cent of vendors satisfied with the sales price.

In South Australia and Victoria 40 per cent of sellers were happy with the price achieved, followed by Tasmania at 39 per cent, and New South Wales and Queensland at 37 per cent.

Just 27 per cent of sellers in Western Australia reported being happy with their selling price.

“WA has been a tough market for quite a period of time,” Mr Armstrong said.

“What we’ve found in WA is that it’s a bit top-heavy in that new estate market, with new homes that have been built in the last 5-10 years.

“Those properties don’t show rapid growth in the early phases of their life, so there is absolutely a top-heavy new home market there.

“It doesn’t matter where you are, Perth, Melbourne or Sydney, new homes in new estates don’t show limited capital growth and struggle even in the first 10-15 years of their life.”

Mr Armstrong said the other major determining factor for WA dissatisfaction was the state’s wider economy, which is inextricably linked with the boom-bust cycle of the resources sector.

“WA is so aligned with the mining industry and global economic forces completely out of WA’s control can produce huge swings in demand,” he said.

“Those two things mean that it’s been a buyer’s market in WA for an extended period of time and I think that’s what those numbers are reflecting.” 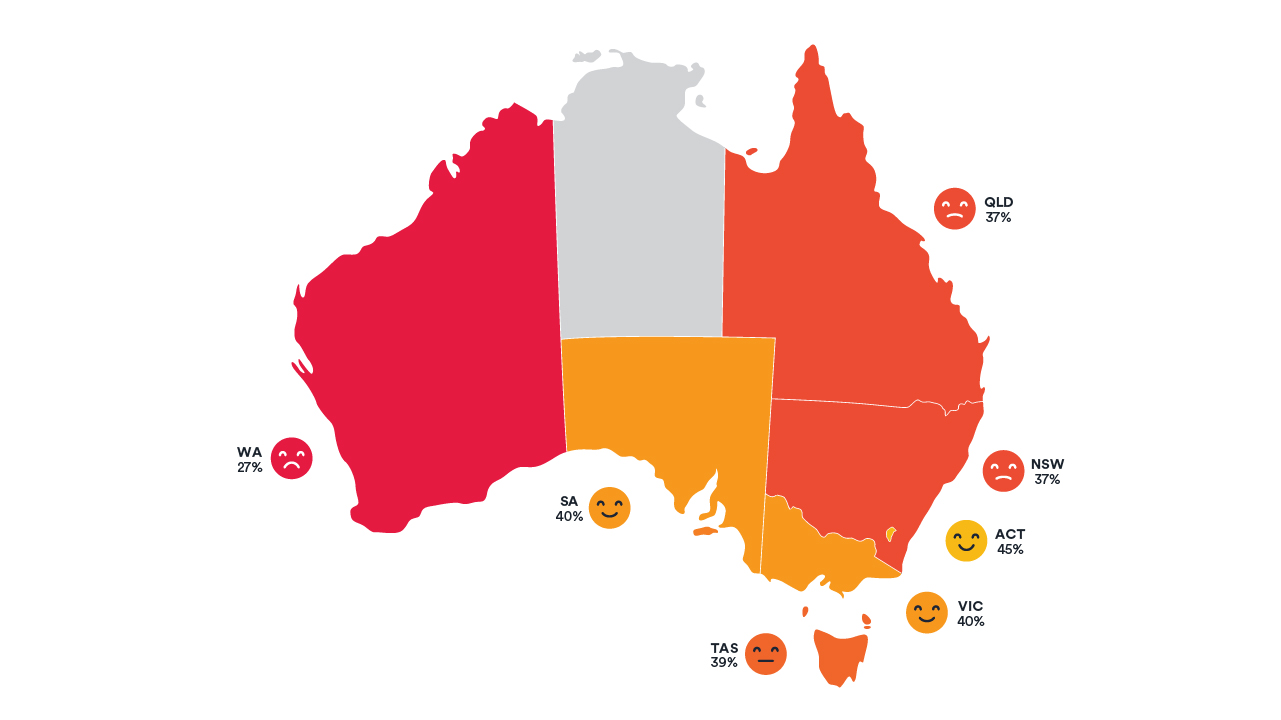