Despite the havoc brought about by floods Brisbane's property market is tipped to stay afloat in coming years.

By Melinda Jennison
| 5-3-2022 | Residential | 4 min read
Total listing volumes in Brisbane are trending lower than any other capital city market.

Nobody in Brisbane imagined they we would see another flood event throughout the city but Brisbane residential property markets remained the fastest growing capital city market in Australia in whirlwind of a month, writes Melinda Jennison, Buyers Agent for Streamline Property Buyers.

There has been a lot of discussion around what impact, if any, the recent flood event will have on the market as we look forward in the weeks and months ahead.

The driving force behind the continued strong growth in Brisbane is low supply and high demand.

With supply already 30.2 per cent below where it was 12 months ago, and more than 40 per cent below the previous five-year average, it is possible that in some areas supply might tighten further.

Total listing volumes in Brisbane are trending lower than any other capital city market in the country. A decline in listings was experienced following the 2011 floods.

A tight supply market is not something that is uniform across all markets in Australia right now, with Brisbane, together with Adelaide, the two capital cities with the lowest total supply. Sydney and Melbourne have returned to more normal supply levels.  This differential highlights why Brisbane has continued to see price growth in recent months as Sydney and Melbourne property price growth stalls.

When there is low supply, there is less choice for buyers.  It creates more urgency and there is a real fear of missing out. 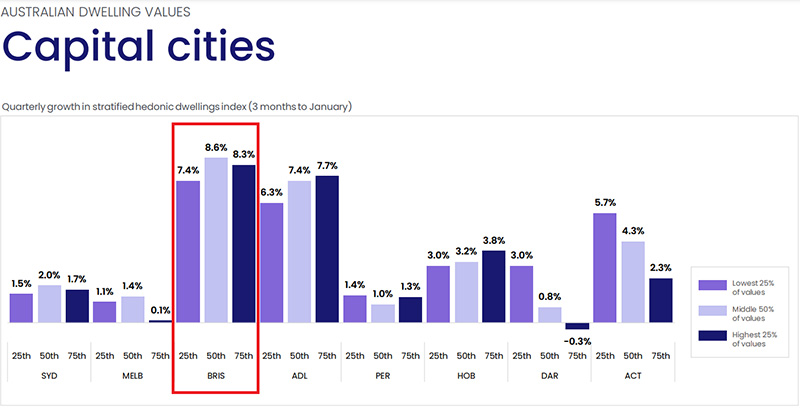 Some buyers might be concerned about the most recent flood event, and the lasting impact of higher insurance premiums. Other buyers might be feeling hesitant due to a high degree of global uncertainty.

The Olympic Games in 2032 are delivering infrastructure developments for one of the most affordable cities to live in within Australia.

There are still a lot of reasons to believe that the demand for Brisbane property, especially flood-free property, will remain strong through the months ahead.

The latest data by CoreLogic for February 2022 confirmed the median dwelling value in Brisbane increased by 1.8 per cent over the month. This is lower than November, December and January but still solid. The current median value for dwellings across Greater Brisbane is now $722,433 which is $15,893 higher than a month ago.

Annual growth for the last 12 months for Brisbane dwellings is now at a staggering 29.7 per cent. 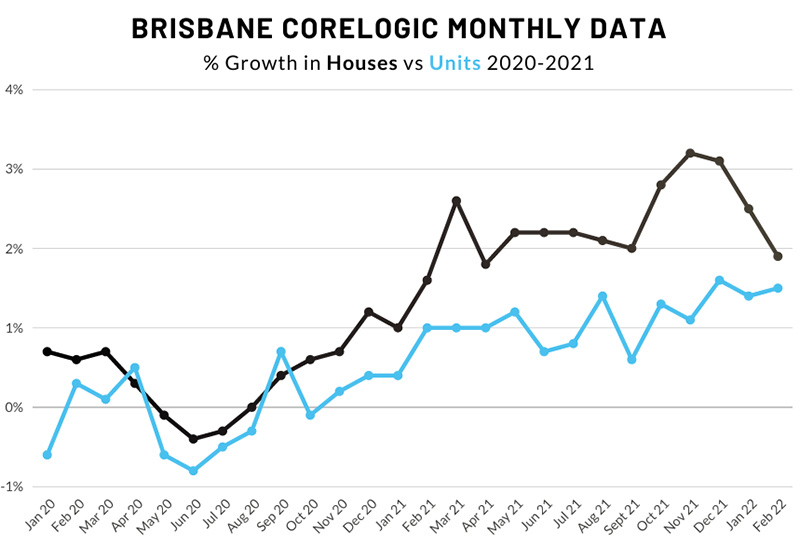 The Brisbane housing market is still outperforming all state capitals.

Median values for the greater Brisbane region increased a further 1.9 per cent throughout February.

The rate of growth has slowed for the third consecutive month, down from the November 2021 high of 3.2 per cent, 3.1 per cent in December, and 2.5 per cent in January.

Despite the slowing momentum, this is another new record median value for Brisbane houses. The 12-month change in Brisbane house prices has been 32.8 per cent, which is the strongest 12-month house price growth across all capital cities as well as regional areas.

The unit market in Brisbane grew strongly throughout February 2022, reaching a new record high. Unit median values in Brisbane were up 1.5 per cent this month, compared to 1.4 per cent last month. The 12-month growth for units across Brisbane is now 14.4 per cent. The current median unit price in Brisbane is $468,393, which is $10,244 more than a month ago.

The housing sector continues to outperform the unit sector in Brisbane on a month-to-month basis, a trend observed since October 2020. The rate of growth is now slowing in the housing sector.

Vacancy rates at a city-wide level in Brisbane fell again between December 2021 and January 2022. They are currently at 1.1 per cent, the lowest since 2006.

Vacancies remained tightened in every sub region of Greater Brisbane this month, with a huge recovery in the inner city market where vacancy rates now at 3.2 per cent - a level not seen in this sub-region since 2013 prior to the oversupply of inner city units being construction.

With international borders open and the impacts from the recent floods, vacancy rates are expected to tighten further in the months ahead.

Rental incomes in the unit market throughout Brisbane have seen an annual increase of 6.5 per cent, with a slight softening in the rate of rent growth for both houses and units in Brisbane over the past last two months.

Gross rental yields for dwellings across Greater Brisbane according to CoreLogic are 3.6 per cent, unchanged from last month.