In an Australian first, the number of property inspections taking place has been tracked, and the data reveals the volume of traffic visiting home opens is soaring this year.

By API Journalist
| 13-6-2022 | Residential | 2 min read
A new index represents the first time Australian market participants have been able to track trends in the number of weekly attendees at property inspections as an early indicator of future sales activity.

Less hurried, some might say fussy, property buyers are attending more home opens to inspect homes for sale than they did last year.

The recently released Australian Inspections Index has for the first time ever in Australia tracked trends in the number of weekly attendees at property inspections as an early indicator of future sales activity.

The data reveals buyer inspections are soaring even as the market slows.

The index rolling four-week average has been higher every week so far this year than in the same week in 2021, with lockdowns not a factor at this same stage last year.

Buyers are checking out more listings in a bid to find the home they want and can afford. 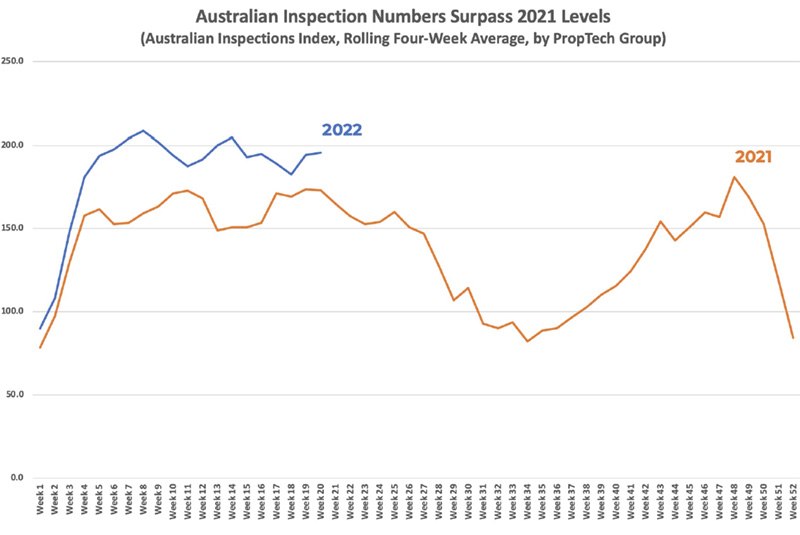 The PropTech Group’s Inspections Index aggregates and indexes the data from more than 245,000 individual property inspections.

Joe Hanna, Group CEO and Managing Director of PropTech Group, said price growth has slowed from its 2021 peak, and auction clearance rates are down but buyers are active.

“Stock is limited and most people still have to visit many open homes before finding what they’re looking for,” he said.

“Buyers are no longer desperate like they were during much of 2021 and that translates into attending more inspections until they find what they want.

“At its current elevated levels, the index tells us there is still significant unmet demand in the market.

“During election week, the number of buyers who attended an open for inspection didn’t decrease — it actually increased by 10 per cent over the prior week to a five-week high, so this election didn’t have the same impact on activity as past elections did.

2022 appears likely to far outstrip 2021, as lockdowns that emerged in the middle part of last year restricted home inspections significantly.

Supporting Mr Hanna's assertion about clearance rates, CoreLogic on Monday (13 June) reported that of the 1,116 auction results collected, 58.5 per cent were successful.

The final clearance rate has held below 60 per cent for the last two weeks and this week will likely be no different when the remaining results are collected.

It is the lowest clearance rate for the year to date for most of the capital cities, including Sydney, Melbourne, Brisbane and Canberra, reflecting more challenging selling conditions for vendors.

Note: The inspection data has been indexed, with the week of 19 October 2020 equal to 100, for ease of comparison and tracking.