Not many first-time home buyers make an eight-hectare regional property their first acquisition but for a nomadic paramedic the bushland of north Queensland whispered 'forever home'.

Not many first-time home buyers make an eight-hectare regional property their first acquisition.

A nomadic career saw Sahara Dry leave her affluent childhood home in Zimbabwe for university studies in Australia and subsequently led to stints in Launceston, Byron Bay and the Gold Coast before settling in regional Queensland.

The 35-year-old paramedic tried her hand at as many jobs as towns before finding her dream career and “forever home” in Charters Towers, population 8,120, 135 kilometres southwest of Townsville.

Ms Dry told API Magazine she knew her first home would always be her permanent home as soon as she drove through the small town.

Within a few years of settling in and becoming a local, Sahara spent $390,000 on a large rural property with a four-bedroom home and powered shed.

The affordability, sense of community and career progression are just some of the many reasons Sahara decided to call Charters Towers home.

“I was always set on making my first home my forever home,” Ms Dry said.

“As a horse lover, that always meant looking to buy acreage.

“Although I was always putting savings away for my future home, the first time I felt the urge to look at property was when I moved to Charters Towers; it just felt right.”

Recent data shows Sydney first-home buyers, as couples, take eight years to save for a deposit. The Melbourne median house price has moved past the million-dollar mark, while Sydney and Brisbane house prices continue to reach record highs.

As the regions absorb so many city dwellers dissuaded by high suburban property prices, Charters Towers is typical of many towns enjoying an influx of new residents. 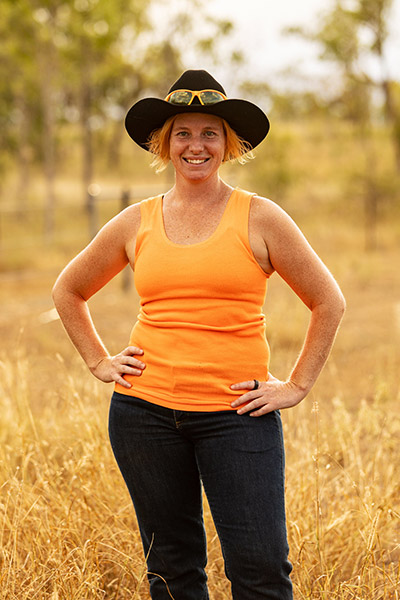 Mining and cattle farmers have been joined by young professionals like Ms Dry.

In the last 12 months, 55 per cent of homes sold in Charters Towers were to first home buyers and investors outside the region.

Julia Fraser, from Harcourts Kingsberry Towers, said there had been a record number of relocation enquiries from people living outside the local region over the past year.

“We’ve not seen this level of demand for many years.”

Ms Dry acknowledged that Charters Towers was a slow-moving property market and said her decision was driven by her heart and not her wallet.

“When I drove across the Burdekin Bridge from Townsville, I immediately felt like I was home.

“There may have been a slight feeling of nostalgia, with the lay of the land reminding me so much of Zimbabwe.

“My employment had me make the move to the area and the lifestyle was the driving factor to settling my roots.

“For me this was home; investment and growth were not a consideration at all.”

A life-long goal to have a home she could call her own led to her committing to a savings plan long before she started looking at properties.

Before retraining and securing work as a paramedic with the Queensland Ambulance Service, the former architecture student was self-employed in the fitness industry with a few additional casual hours in gyms to bolster her income.

“If I had continued with this work, my savings goal would have been extended out several more years but permanent full-time employment with Queensland Ambulance Service certainly helped the savings grow and I put a lot of effort into filling overtime shifts to boost that income.

“My spending was reduced to the necessities with a budget enforced each week.

“Most of my deposit was saved over two years, where I heavily budgeted myself and maximised my income.

“In saying this though, the deposit needed for properties in regional north Queensland are far below the deposit expected for Sydney properties; for the price I paid here, in Sydney I would be looking at a studio apartment.”

While the relative affordability of buying in Charters Towers was a welcome boost for Ms Dry, the banks were not necessarily as excited about the relatively slow-moving property market.

“Purchasing property in an inland regional area has the great advantage of more bang for your buck, but there is also higher risk on the loans as it is a slower moving sales market.

“When I first approached the banks for a home loan I was knocked back, informed that I could not be considered for finance without a minimum deposit of 30 per cent.

“Early on, to be considered for a loan, I had my parents sign on as guarantors and as my savings grew I no longer needed to have my parents’ assistance, but it was a great security net for the beginning of my property purchase journey.”

Ms Dry said she opted for a variable interest rate as this granted her more control of loan repayments, with the added bonus of redraw should the financial need ever arise.

So, with her forever home secured, Ms Dry is now able to focus her energy on giving back to the community she said had accepted he so warmly.

“A workday starts early, ensuring all pets are fed and watered before I head out the door,” she said.

“My property in ‘the middle of nowhere’ is just a six-minute drive to the ambulance station, with no traffic to contend with.

“The coverage area for the Charters Towers station is huge, extending 50 kilometres east towards Townsville City, 200 k’s south to Belyando Crossing, another 110 west to Pentland and 100 north towards Greenvale; so there are times where driving makes up the majority of your day.

“At the end of the 12-hour shift, the day is not done; on-call duties begin, which entails taking an ambulance home and being ready to respond when the call comes in.”

For anyone looking to replicate her lifestyle and property decisions, Ms Dry said it was most important to know what you wanted in life and not just financially.

“Get to know the property market of the area in which you are looking to purchase.

“For example, the slow-moving market in Charters Towers makes it unrealistic to ‘flip’ homes.

“I decided early on that I wanted my forever home, so my purchase is a win.”