Housing supply drying up, threatening affordability for years to come

A new report on the state of the nation’s housing market has put state government’s on notice, highlighting the urgent need to address severe shortages in housing supply. The National Housing Finance

A major supply crunch is heading towards the nation’s housing market at breakneck speed, threatening to wreak havoc on property affordability.

Various state and federal governments and oppositions have said housing affordability is a key issue but little that’s been done or is in the pipeline appears likely to address severe shortages in housing supply.

The National Housing Finance and Investment Corporation (NHFIC) this week released its second State of the Nation’s Housing report, showing that while housing supply may appear healthy in the short term, there is a major shortage on the horizon.

Property Council of Australia Chief Executive Ken Morrison said the report showed that as the economy and net overseas migration recovers, the demand for new households will outstrip supply.

“The projections in this report are concerning and mirror the same warnings the Property Council of Australia has been making for some time,” Mr Morrison said.

“The report clearly shows that between 2025 to 2032, Australia will find itself 163,400 homes short of expected demand,” Mr Morrison said.

“Overall housing supply is expected to fall by around one third in just four years from 2023 and that can’t be good for housing affordability,” he said.

“Given it can take several years to bring new housing supply to market in some areas, this could limit the development industry’s ability to meet future demand when population growth is expected to have recovered to pre-pandemic levels.

“A shortage of multi-unit dwelling completions is expected in the next two to three years, especially as rental markets are already tightening, and demand will lift as international border restrictions are relaxed.

“More higher density dwellings will be required closer to CBDs to meet unmet demand,” he said.

Those trying to get on the property ladder by saving are confronted with the stark reality that Australian home values rose almost 10 times faster than wages last year.

House prices across the country rose 22.1 per cent last year, while wages crept upwards by just 2.3 per cent. 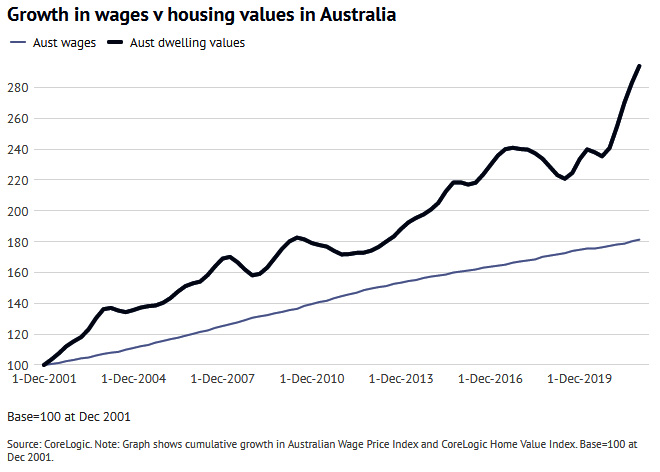 CoreLogic research showed dwelling values climbed at more than double the annual pace of wages over the past decade, up by an average of 5.5 per cent each year compared with a 2.3 per cent average rise in the wage price index.

As Australia’s borders open and increase demand for housing from migrants and returning expatriates, and interest rates rise, the strain on housing supply and debt repayments looks like intensifying.

Urban Development Institute of Australia National (UDIA National) President, Maxwell Shifman, said the report would be pored over by industry and government over the coming weeks but what the data tells government is that it needed to act now to avoid the worst impacts as the economy recovers and immigration returns to normal levels.

“The total demand for new and existing housing still outstripped total supply in the market, the increase in housing prices continued unabated and the NHFIC report data confirms that this is likely to only get worse.

“Housing affordability issues are not a problem of increased population but simply the symptom of failing to plan for growth.

“The lag time in developing new housing supply means that, unless the housing market is primed now with strategies to stimulate supply to match demand, we will see increasingly chronic affordability issues across the Australian housing spectrum,” Mr Shifman said.

Putting a human context to the numbers, the NHFIC report coincided with another research paper from the Australian Housing and Urban Research Institute (AHURI) that examined the impact on societal wellbeing caused by housing supply limitations and high prices.

AHURI’s Precarious housing and wellbeing: a multi-dimensional investigation paper found the share of the population in unaffordable housing has risen over time, from 6 per cent in 2002, peaking at around 8 per cent in 2010 and stabilising at 7–8 per cent since.

“At a time when housing affordability is front of mind for so many Australians, the last thing we can afford is having supply and planning constraints putting further upward pressure on rents and prices,” Property Council of Australia’s Mr Morrison said.

According NHFIC, a federal government body, the average first home buyer is locked out of approximately 70 per cent of the country’s property market. They now need nine years to save a deposit compared to four years in the 1990s.

The Federal Government launched an inquiry into housing affordability and supply in July, which is expected to publish a final report next month.

Labor’s Shadow Minister for Housing and Homelessness, Jason Clare, responded on Friday (25 February) to the release of the NHFIC report by issuing a media statement saying, “housing affordability is one of the biggest issues facing Australia and the Morrison-Joyce Government have put their head in the sand.”

He said regional Australia was in a housing crisis but the statement offered no policy details or suggestions.