By Dan Wilkie, Journalist
| 15-4-2021 | Development | 9 min read
Local buyers have been particularly active at the northern end of the Gold Coast. Photo: Shutterstock

At the epicenter of the Queensland property boom is the Gold Coast, where apartments, townhouses, villas and house and land packages are seemingly selling themselves.

Data from Urbis showed the Gold Coast recorded the biggest sales increase of any Australian jurisdiction for apartment sales in the last three months of 2020, with 26 per cent of all available stock sold.

Inner Brisbane’s apartment market also continued to outperform the national average, with 16 per cent of the available stock sold in the December quarter.

Mr Mastrocostas said Aniko Group, which is focusing its operations around apartment, villa and townhouse developments on Hope Island, accounted for 15 per cent of apartment sales on the Gold Coast in the December quarter.

“But at the moment the level of enquiry is so high and there’s no buyer hesitation or buyer’s remorse.

“In the old days we might write 30 contracts in a month in a good market, but you might lose 10 a month because of buyer’s remorse, but right now if you are getting 30 buyers, the 30 buyers are sticking.

“It’s crazy, there’s no convincing required. There are agents out there vying for good stock, there are purchasers out there that are fighting for apartments. We’ve never seen that in the market, that’s definitely got to be a first.”

Mr Mastrocostas said while buyers were once discerning and hesitant, the enquiry levels for apartments or house and land packages was the highest they’ve ever been.

But more importantly, he said the quality of enquiry was also at an all-time high.

“Back in the day, if you had 10 people enquire you might get a couple of sales or a sale. At the moment if you get 10 enquiries there could be six or seven sales in that 10. The conversion rate of the enquiry is quite high,” Mr Mastrocostas said.

“Buyers would come in and negotiate back in the day, even six months ago you would get people coming in asking for a discount or get something thrown in.

“None of that is there at the moment. If people are lucky enough to find it, they’re feeling fortunate to be able to get a property and jump into the market at this time.”

Mr Mastrocostas said Aniko Group was fortunate to have a strong pipeline of development projects, a situation that not all South East Queensland developers were enjoying.

Aniko Group’s current portfolio is valued at around $400 million, with the developer gearing up to launch a recently-approved $52 million house and land estate at South Ripley in Brisbane’s west, and lodging plans for a $48 million luxury townhouse project at Hope Island.

The developer is also set to start construction shortly on a $130 million waterfront precinct on Sickle Avenue, on the Hope Island waterfront, comprising 58 luxury townhouses.

“We have a healthy pipeline there that we will just continue to bring to market to appease the market’s appetite,” Mr Mastrocostas said.

“As long as the market has demand we’ll just keep on bringing on supply. We’re happy to turn that tap off, depending on when that demand starts to come off or slow down, or whatever it may be, but I think that’s the issue that most developers are going to face right now, is having that supply.

“Not many developers out there have a big pipeline of product. They may have one project in the wings, so I think it’s going to come down to having a good supply of product moving forward, because at the moment it’s getting really difficult out there.

“I know in established real estate a lot of the agents are saying they don’t have any listings, and it’s really hard for them at the moment. It’s pretty much the same with any off-the-plan sales.”

Mr Mastrocostas said Aniko Group’s success could also be attributed to its strategy of supplying a market that the developer viewed as having a big imbalance between supply and demand.

“We are providing a supply of apartments where I was always confident there was a huge underlying demand for high-density living in Hope Island that’s never really been tapped into,” he said.

“They’re very much a lifestyle buyer, and they are very much a local buyer. The majority of our sales are coming from the local Gold Coast market, which is really the market that we’ve always catered for.

“We are hearing about massive sales in Burleigh and Palm Beach, and a lot of them apparently are from interstate, which is great, but there is a very distinct market there.

“They’re not our buyers, we are not targeting them and it’s really not the product for a Sydney or a Melbourne buyer.

“We’re just fortunate enough that we’ve been able to create a brand out there at Hope Island, especially with the first stage of 1 Grant Avenue, which has been a huge success."

At the southern end of the coast, Brisbane-based Spyre Group is hurtling towards the launch of its fourth Gold Coast project, with the developer finding itself in the position of having no stock to market after selling out at its three previous projects.

Luxury-focused Spyre Group has sold 110 apartments collectively valued at $231 million on the Gold Coast since it landed there in 2016, with two buildings having been completed and the other recently started construction.

““MAYA Kirra Beach and Elysian Broadbeach both completed construction in September of 2020. Natura Burleigh Heads saw the crane erected onsite in mid March and is on track for completion in 2022,” Spyre Group director Andrew Malouf said.

“To see two projects reach sell out within months of completion, coupled with the phenomenal sales success at Natura is a true testament to all involved in these projects.”

“During Natura’s launch, just weeks before the first COVID lockdown in March 2020, we saw 25 of the 31 apartments sell off the plan in one day.”

While Mr Malouf said Spyre Group hadn’t been completely surprised by the results, they were nonetheless extremely pleased to achieve such strong sales in a market that was marked by uncertainty 12 months ago, and had morphed into one of Australia’s most competitive since.

“Much like every developer at the time, we were certainly wary of the impacts COVID might have on the success of the market, particularly just having launched a project and with another two in the midst of construction,” Mr Malouf told API Magazine.

“That said, we were confident in the products we were presenting. Copious amounts of research and preparation are invested into our projects before they hit the market. We develop beautiful residences that facilitate the requirements of our key downsizer clients.

“And working with these clients to produce developments that tick all of their boxes is always going to guarantee some sort of success or market acceptance.”

While Spyre Group targets the downsizer and owner-occupier markets, Mr Malouf said there had been significant investor interest in its $79 million Elysian, located on the beachfront on Old Burleigh Road in Broadbeach.

CoreLogic data shows median values for units in Broadbeach have risen by 11.5 per cent over the past 12 months, while median rents are sitting at $430/week.

“Location has been a key draw card for investors at Elysian, the project gains great traction from the rental market also,” Mr Malouf said.

“Elysian was actually in the 3 top most searched for new residential developments on the Gold Coast for 2020.”

Next up for Spyre Group is a project to be known as Cala Dei, located on the former Komune Resort site overlooking the famous Snapper Rocks surf break at Coolangatta.

Spyre Group is awaiting a development approval for a 12-storey, 31 apartment complex which will be nestled in the foothills of the Greenmount headland.

Mr Malouf said while it had become increasingly competitive among developers and challenging to acquire sites, their focus would continue to be on finding beachfront opportunities on the southern Gold Coast.

“A lot of time goes into the acquisition phase for each of our projects, searching high and low for sites that are synonymous with our ethos here at Spyre Group,” he said.

“The selection criteria goes far beyond having a beachfront address, the sites we choose consider location and surrounding amenity, aspect, livability, durability and a general uniqueness.

We’re always looking to deliver a product that raises the benchmark within the market.

“This criteria sheet is perhaps what has drawn us to the southern end of the Gold Coast in recent years, it fulfills our brief.

“The aspect from Cala Dei’s residences will be truly unique, with the outlook from the rear apartments as equally as beautiful as those on the front – stretching over the Tweed Marina and down to Cabarita on a clear day.”

“It’s this level of consideration and a discerning approach to acquisition that allows us to create beautiful products that will hold their value for our clients for many years to come.”

Mr Malouf said one of the big driving factors in the sales success was a fundamental shift in buyer behaviour that occurred over the pandemic.

“To draw some positive out of such a trying year, COVID allowed people to recognise the true emotional value and importance of ‘home’ – which has pushed a significant percentage of people that weren’t quite ready to downsize into taking the leap and committing to a sea change,” he said.

“The pandemic has also welcomed flexibility into the workplace, it’s allowed people to reconfigure their professional lives to accommodate a coastal lifestyle that might have otherwise been five to 10 years away.

“The urgency that COVID created was in some ways unexpected, though we do hope that the influx of clients it pushed toward the Gold Coast is a trend that will hold for the foreseeable future.

“Recognising the value in prioritising home life and stopping to appreciate the view is something we hope never goes out of style.” 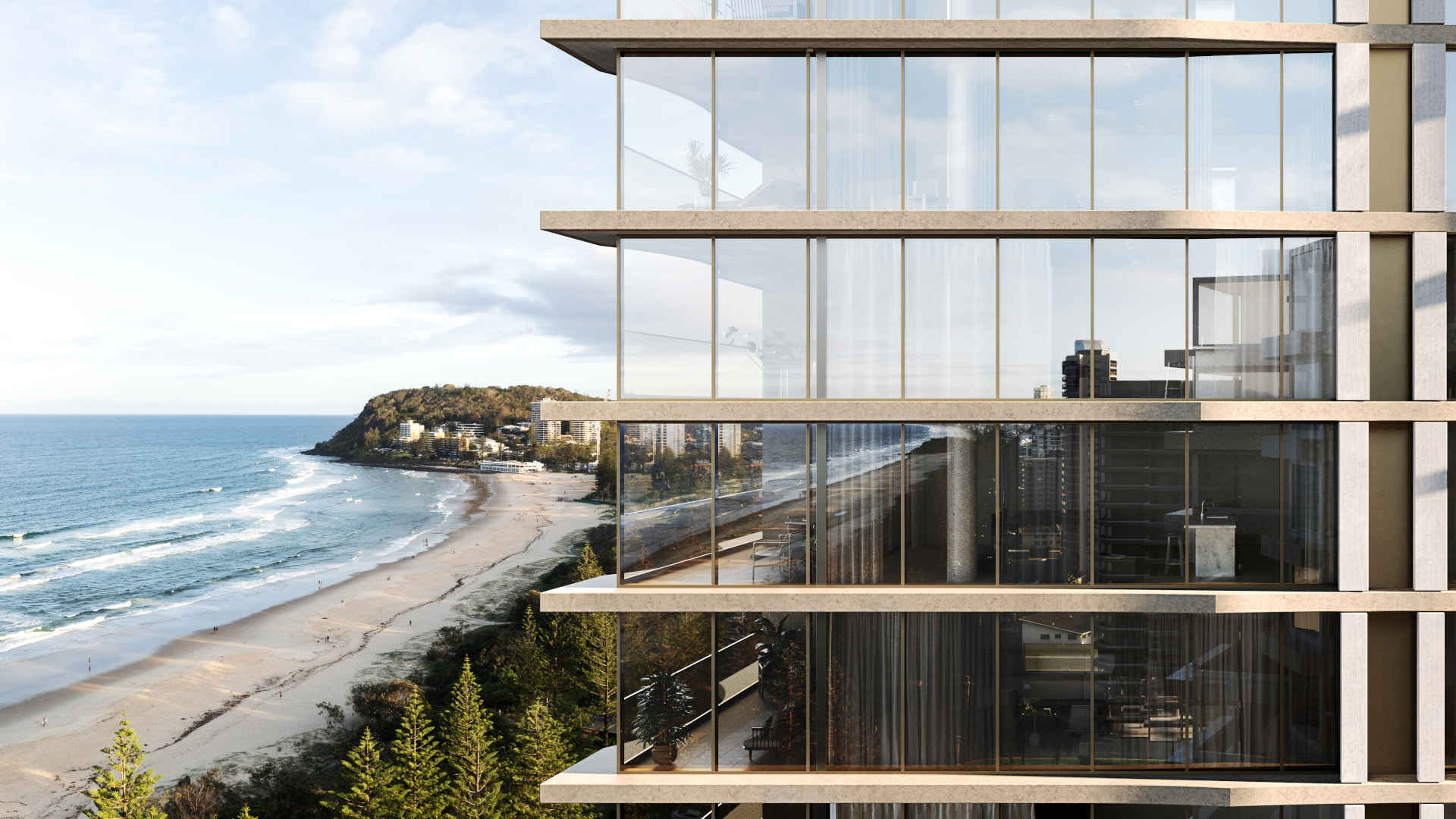 Spyre Group's Natura at Broadbeach was one of the developer's fastest selling projects. Image: Spyre Group