Despite strong equity markets, the challenge for retirees is clear

Analysis by SuperRatings has shown that paying attention to how your superannuation is invested pays dividends.

Analysis by SuperRatings has shown that paying attention to how your superannuation is invested pays dividends. SuperRatings has tracked the returns of the most common super options over the past 10 years with the results displayed in the chart below. 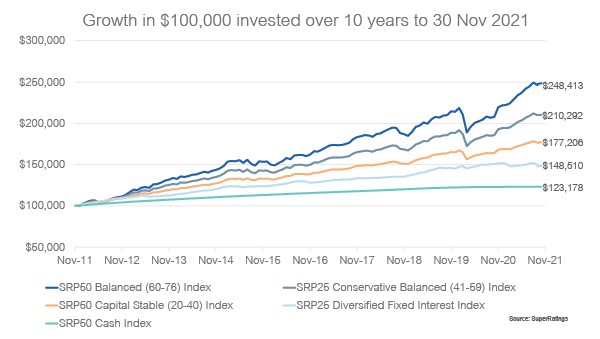 SuperRatings Executive Director, Kirby Rappell, says "A balance of $100,000 in Nov 2011 invested in a typical balanced option would now be worth $248,413, an increase of 148%. Compare that to a member invested in a cash option, whose balance would now be $123,178 – an increase of 23% and a shortfall relative to the balanced option outcome of over $125,000 - which emphasises the challenges for members with significant exposure to cash. While the balances of younger members grow strongly, those members trying to derive an income from their savings face some very real difficulties."

SuperRatings sees the majority of pension assets sitting in Balanced, Conservative Balanced and Capital Stable options, with the latter two investing more in bonds and cash like investments. The median conservative balanced option grew to $210,292, while growth was more muted for capital stable members and those invested mainly in bonds through the typical diversified fixed interest option. There was a dip in balances due to the pandemic, with older members in more conservative options less impacted than growth focused accumulation members.

Looking at cash options more closely, over the last 10 years, a member sitting in cash would have seen a return of only 2.2% per annum. Mr Rappell continues "The experience of many Australians with exposure to cash has been extremely challenging. Reviewing your risk profile remains important, as retirees need to ensure they are invested in a way that helps them achieve their long-term objectives. We also need to see greater innovation in this space to ensure that super funds are able to help retirees achieve appropriate outcomes in retirement."

SuperRatings recommends members consult their fund or an adviser they trust to help ensure any decision on how their super is invested is part of a long-term strategy.

November was another positive month for superannuation, as confidence remained high with vaccination rates hitting 90% and the economy opening up further. According to SuperRatings’ data, the median balanced, growth and capital stable options all rose an estimated 0.3% in November, with the balanced option returning an estimated 11.4% for the calendar year to date and the growth option returning an estimated 14.1% over the same period. However, returns for the past 6 months have been more muted, albeit positive, with greater volatility observed.