With construction under way on what will become some of Australia’s tallest buildings, Brisbane’s mammoth development pipeline - worth in excess of $15 billion -  promises to elevate the city’s global standing.

The Queensland state government is facilitating massive private sector investment by pouring in billions into transport and entertainment infrastructure in the centre of Brisbane, with its $5.4 billion Cross River Rail project its largest commitment to date.

Four underground stations will be built as part of Cross River Rail, while the Queensland government is creating five train station precincts as part of the rollout, enticing private sector developers to invest heavily.

The rejuvenative infrastructure investment is designed to not only increase Brisbane’s attractiveness as a business, leisure and residential destination, but also set the city up to host the 2032 Olympics. 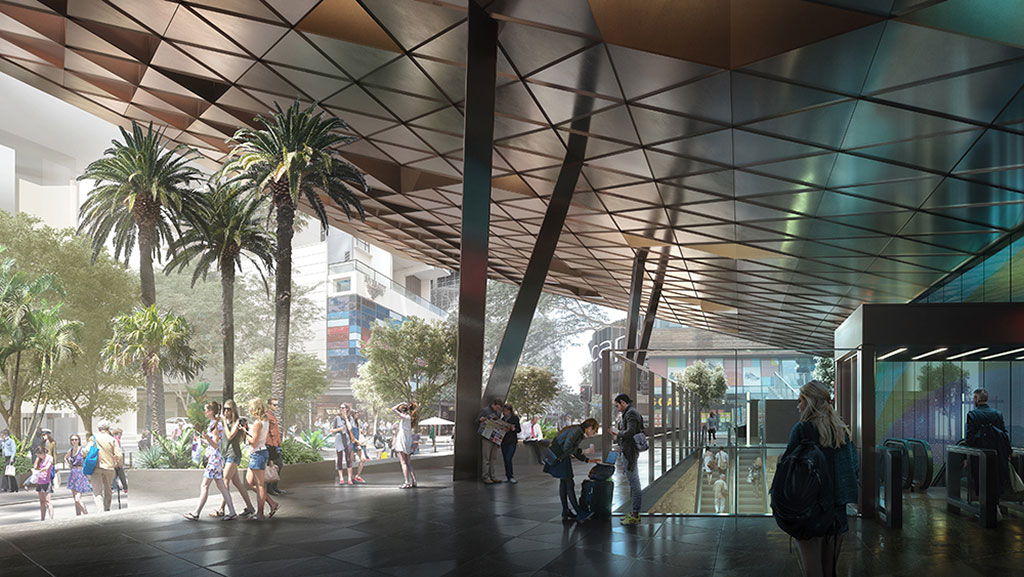 A concept for the main entrance of the new Albert Street station. Image: Cross River Rail

The latest move has come from ASX-listed developer and funds manager Dexus, Australia’s biggest commercial landlord which currently lays claim to a national development pipeline worth more than $11.2 billion.

Dexus lodged a development application midway through June for its Waterfront Brisbane, a $2.1 billion riverfront precinct it promises to set a new benchmark as a business and leisure destination.

The project, which has been in planning for several years, will include two office towers - at 49 and 43 storeys - riverfront dining, new retail outlets, public plazas and an upgraded riverwalk and is estimated to provide a $5.7 billion boost to Queensland’s Gross State Product over the next four decades.

Mr Beasley said a key aspect of the development was to reconnect the CBD to the Brisbane River, providing dining and leisure opportunities for the wider community as well as the future occupants of the office towers.

“The river is Brisbane’s biggest asset, but we’re very good at building things that turn its back to it, blocking views and access to the river,” Mr Beasley told Australian Property Investor Magazine.

“While the pier trades very well as it is today, opening up physical connections down to the water is a key part of the design principle.

“With the public realm, we are reimagining the history of the site.

“Originally where the market steps and square are where they used to bring all of the agricultural produce in from Eagle Farm and Newfarm, which are now very trendy residential parts of the city.

“As part of the project we are tying the public realm and placemaking elements back to that history and heritage, because it’s pretty rich.” 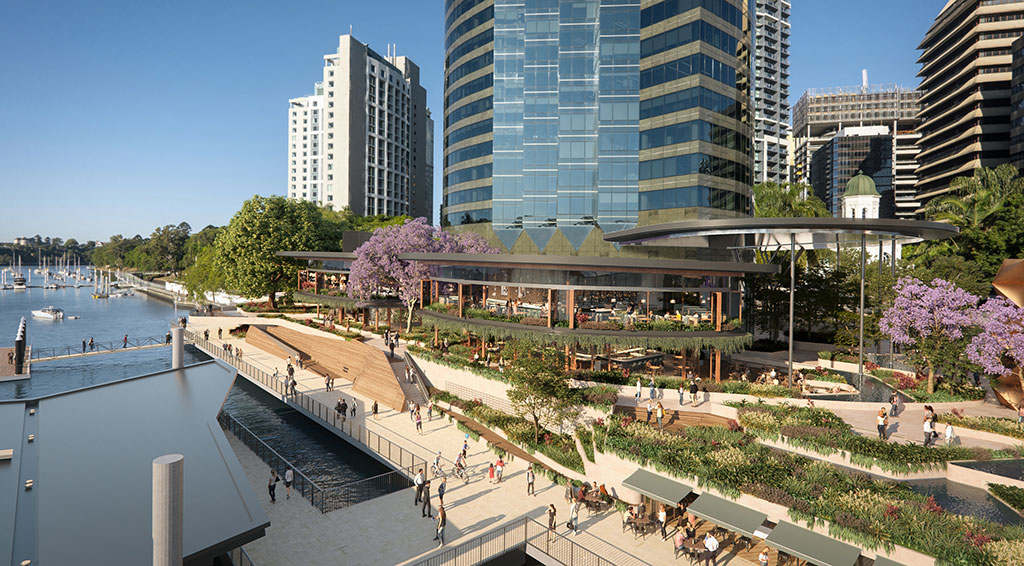 Mr Beasley said the current Eagle Street Pier, while popular, was in need of a major revamp, having been designed in the late 1980s and not drawing on the best aspects of the site and providing limited access to the river.

To ensure maximum flow on benefit to the surrounding precinct, Dexus will elevate the commercial buildings to open the area to the public and make room for retail and hospitality spaces to be created at the ground level.

“That gives both a physical and visual connection down to the river, where we are also introducing a new 280 metre long riverwalk that will have a minimum 6m pathway through it,” Mr Beasley said.

“Today, the pathway is about two to 2.5 metres, so you can imagine that creates its challenges with people wanting to go along the river.

“It will radically change the customer experience, both people coming to work there but also people passing through as part of a wider riverwalk network.

“The precinct is already vibrant, however it’s an opportunity to unlock a site that was designed and built 30 years ago.

“It’s really tailored to the modern workplace, with a lot of indoor-outdoor space, spaces for people to work inside and outside of the building, elevated terraces, and smart technology in the building.”

Subject to securing approvals, Dexus expects to start main works on the Waterfront Brisbane precinct in 2022, with the riverwalk to come online in 2024 and the first tower completed in 2026.

That lead time will provide significant long-term employment opportunities, with around 1,000 jobs to be created in the construction phase and 900 upon completion to play no small part in Queensland’s recovery from the COVID-19-induced recession. 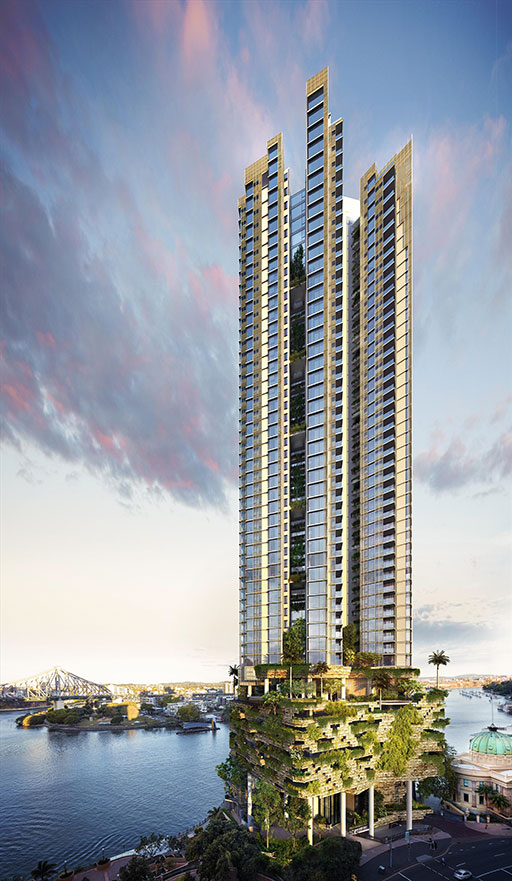 443 Queen Street has been described as a 'Queenslander in the sky'. Image: CBus Property

In terms of transformative projects, Dexus’ $2.1 billion precinct certainly isn’t alone, with construction underway on a series of skyscrapers in Brisbane’s CBD that will seriously shake up the rankings of the not only city’s tallest buildings, but also Australia's.

The 264-apartment building, which has been described by the developer as Brisbane’s first subtropical residential tower, recorded one of Brisbane’s highest value off-the-plan sales in 2018, with one of its penthouses selling for $6 million.

Construction works are being undertaken by tier-one contractor Probuild, with the $370 million project expected to be complete before the end of 2020.

On a bigger scale is the $3.6 billion Queen’s Wharf, a joint venture between Hong Kong-headquartered developers Far East Consortium and Chow Tai Fook Enterprises, in collaboration with The Star Entertainment Group.

Queen’s Wharf is one of Brisbane’s biggest-ever developments, with 2,000 apartments, 1,000 hotel rooms and up to 50 new bars, restaurants and cafes to put the city on the global map as a world-class tourism, leisure and entertainment destination.

Four towers will be built to make up the precinct, with the first residential tower, Queens Wharf Residences, rising 64-storeys high and containing 667 apartments.

Five hotels are in the works at Queen’s Wharf, including the ultra-luxury Ritz-Carlton, Far East Consortium’s Dorsett, New World Development’s Rosewood and two under The Star brand.

The historic Treasury Casino and Hotel will also be redeveloped to become a high-end retail centre, complementing the Ritz-Carlton Hotel. 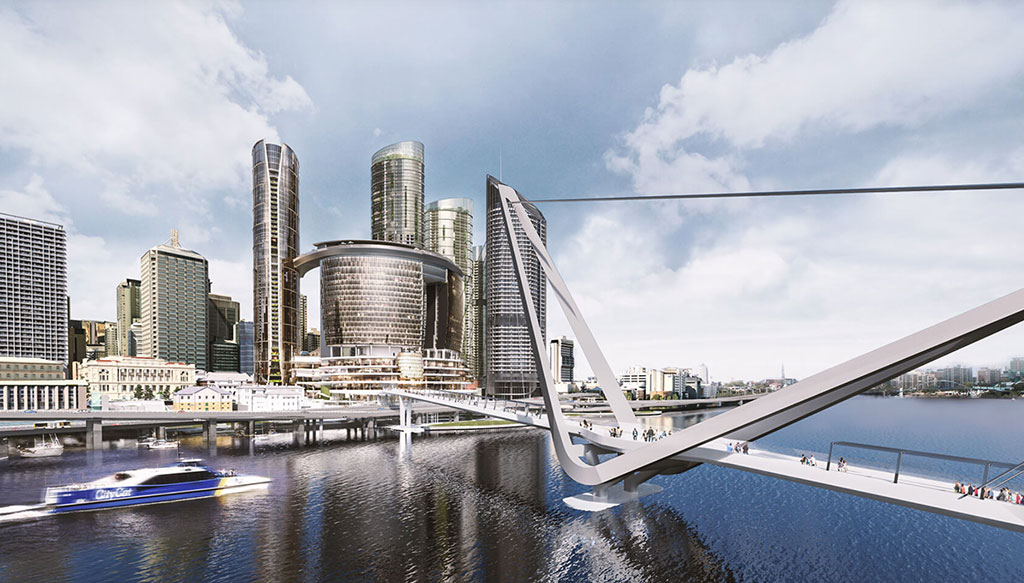 Alongside those facilities will be a new pedestrian bridge and a 6,500 square metre public space known as The Landing, which will be suspended above the Brisbane River and feature garden beds, landscaping and terrace seating in addition to event spaces.

As well as not slowing down construction, the COVID-19 crisis did little to dampen apartment buyers’ enthusiasm for Queen’s Wharf, with the project consortium reporting in April that virtual tours had helped push sales past the 500 mark for the precinct’s first residential tower.

On nearby George Street, Taiwanese developers Shayher Group and Bow Jia Development have reached the third stage of the $1 billion Brisbane Quarter - an 82-storey skyscraper known as The One, which promises to deliver new levels of luxury living in the city’s tallest building at 274 metres.

Brisbane planning regulations do not allow for buildings to be built any higher, in accordance to Civil Aviation Safety Authority guidelines.

Multiplex is also building the 467-apartment tower, which will sit alongside a 34-storey W Hotel and a 42-level commercial tower, 300 George.

Brisbane’s second maximum height tower, a 91-storey behemoth designed by Cox Architecture, is proposed to be built at 30 Albert Street.

However, Singaporean developer Aspial World Class Land’s progress appears to be stalled, as the basement of the approved building design encroaches on the Cross River Rail underground tunnel zone.

Another project potentially enlivening Brisbane’s CBD, but under a cloud of uncertainty, is Brisbane Live, a $2.1 billion 17,000-seat indoor entertainment venue.

Brisbane Live is expected to play a key part in the city’s Olympics bid and is proposed to sit above the Roma Street station, delivering an entertainment precinct designed to complement the vast round of residential and commercial development in the city centre.

The project, however, is no certainty to proceed, after the Queensland government’s Audit Office in May found its benefits to the city may not outweigh its cost of construction.

In the wider context, Urban Development Institute of Australia Queensland chief executive Kirsty Chessher-Brown said the unprecedented wave of development would boost Brisbane’s attractiveness not only to international and interstate visitors, but also for locals.

“The transformation of the Brisbane CBD is long overdue and key projects currently underway will help with its revitalisation,” Ms Chessher-Brown told Australian Property Investor Magazine.

“Improved transport connectivity through Cross River Rail and Metro will also serve to make our CBD even more accessible.

“Delivering world class buildings, attractions, and transport in the CBD will help draw in more visitors and diversify its focus away from being an employment hub Monday to Friday.”