Australian cities have slipped down the rankings of a couple of key global corporate indices, including liveability and prime rental market growth.

By Craig Francis
| 27-6-2022 | Residential | 4 min read
Australian cities have slipped down a couple of key rankings among the corporate world in terms of liveability and prime rental market performance.

When assessing pay and conditions for their global workforce, businesses around the world factor in data about the liveability of cities and the price of rent in the prestige markets most favoured by the executive and senior staff.

Australia’s appeal may have slipped a little if the latest Economist Intelligence Unit’s Global Liveability Index 2022 is anything to go by, while rents in the prestige property market are also slipping behind other international business hubs.

Australia’s dominance of the top ten most liveable cities list in recent years was seemingly down to its covid response but with the world open for business again, only Melbourne has managed to cling to a spot in the top ten.

In general, mid-sized cities in the wealthiest countries tend to fare exceptionally well in the survey, with Vienna regaining its position at the top after stints there in 2018 and 2019.

Melbourne had topped the list from 2011 to 2017 before being overtaken by Vienna.

Adelaide, which was ranked second in last year's index, has fallen to 30th, Perth fell 26 spots to 32nd and Brisbane dropped 17 spots to 27th. The three cities, along with Wellington and Auckland in New Zealand, were among the top ten cities recording the biggest descents down the rankings among the 172 cities measured.

“In Australia, some states were slower to lift restrictions than others, so as a result, Perth and Adelaide have lost ground since last year, and Melbourne is once again Australia’s highest-ranked city,” the Index report noted.

“Adjusting policy dynamically will remain key to staying on top.”

The EIU’s list assesses cities across the categories of stability, healthcare, culture and environment, education, and infrastructure.

Top tier cities around the world are seeing luxury residential rental demand return and stock dwindle as workers, along with international students and corporate tenants, return to the prime end of the market.

But not so much in Australia.

New York and London lead the rankings in The Knight Frank Prime Global Rental Index released this week, with rents up 38.5 per cent and 26.4 per cent respectively in the year to Q1 2022, although this largely represents a return to pre-Covid levels.

Sydney was the only Australian city to appear in the top 10 cities, at number 5, with 7.2 per cent growth compared to the average annual rise in prime rents of 11.9 per cent, the highest rate since 2010. 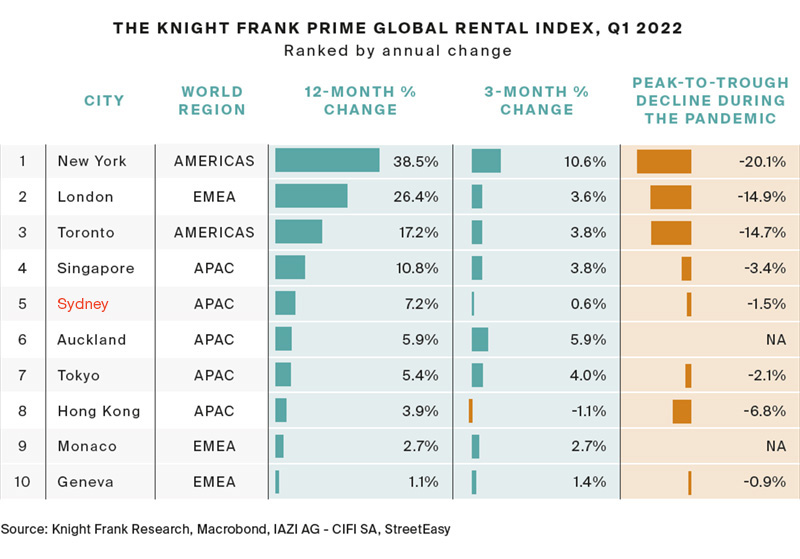 Knight Frank Australia Head of Residential Research, Michelle Ciesielski, said Sydney has a relatively small number of prestige residential rental properties on a global scale, and they tend to be distributed across the city and around the harbour.

“When in town for business, regular international corporate travellers tend to lean more on hotel and short-stay accommodation, so when the global pandemic limited activity within proximity of the CBD, Sydney’s overall prime rental market wasn’t as impacted compared to cities like New York and London.

“There were three groups driving up prestige rents, including those taking advantage of phenomenal sale prices being achieved in their suburb, selling their home and using the low interest rate environment to invest further in their business ventures, returning expats and renovators.

“Prestige rentals in Sydney saw an uptick in demand from returning expats at the start of the pandemic, and at the same time, other expats were withdrawing their properties from the rental pool once arriving home.”

Throughout the pandemic and still experienced today, the range of properties to buy at the top of the market remains tightly held, Ms Ciesielski said.

“Many have instead chosen to rent a home while they renovate their current home, or have purchased a property in a good location but one that requires extensive works to be done.

“Given construction delays experienced currently across the industry, many are now also holding onto their rental property much longer than they first envisaged.”

Hong Kong is the only city to register a decline in prime rents in the three months to Q1 2022.

Rental listings in prime central London declined a massive 72.7 per cent in the same period.

The Knight Frank report noted that key to this trend of rising rents has been the lifting of covid restrictions and a lack of supply, in part borne out by the sales boom that motivated some landlords to sell, not rent, during the pandemic.

“The pandemic has also made people reflect on where they want to live, and initiatives such as digital nomad and welcome visas are creating a more transitory workforce,” the Index report noted.

“Globally, many untethered workers sold up to take advantage of the housing boom in 2021 and are now considering their options, adding to a growing sense of flux in the market, further exacerbated by the 'great resignation' trend.”

The surge in rents globally reflects a reversal of large falls in 2020, which helped attract tenants back to the cities.

But with rents now reaching pre-pandemic levels, economic growth stuttering and the labour market weakening, Knight Frank said it expected prime rental growth to cool rapidly over the remainder of 2022.