Mainland buyers have been taking bites out of the Apple Isle’s juicy property market over the past year but it is the voracious appetite of the locals that is pushing median prices upwards.

Mainland buyers have been taking bites out of the Apple Isle’s juicy property market over the past year but it is the voracious appetite of the locals that is pushing median prices to those worthy of a Michelin-starred restaurant.

If growth rates that have seen prices increase by a staggering 40 per cent since the onset of the pandemic were to continue this year, Hobart would overtake Melbourne’s median property price.

What was not long ago unthinkable, is now a distinct possibility.

The market as a whole has moved at a rapid rate of knots but it’s the prestige property market that is breaking land speed records.

Exeter, north of Launceston, and Prospect Vale on the southern fringe of the same city, have seen their medians increase by almost $200,000.

Rosebery is Tasmania’s most affordable town with a median price of $135,000.

Mainland buyers seeking a permanent lifestyle change have had an impact, as have investors from the rest of the country, but it is still the locals who are the driving force behind the stunning price growth.

Mainland buyer numbers increased by 54 per cent to represent 23 per cent of sales, while locals acquired 77 per cent of these properties.

Of the mainland investors, 38 per cent (841) were investors buying at a median price of $412,000. The remaining 1,349 mainlanders who were migrating to Tasmania’s brisk shores acquired property at a cool median price of $480,000.

No seat at table for first homebuyers

As investors, mainlanders and wealthy buyers pouring into the market sent prices flying, first homebuyers were left on the tarmac. Sales numbers were down nearly 20 per cent from the same time last year for first-timers.

For those perhaps forced to rent, there was little respite. Rents continue to rise due to a lack of supply.

Hobart, Launceston and The North-West Centres recorded their lowest rental vacancy rates of 0.9 per cent, 0.8 per cent and 1.3 per cent respectively in the December quarter.

“A dire shortage of properties for sale and for rent combined with an unprecedented demand for residential accommodation to live in and rent, has seen prices and rents surge to new highs,” he said.

“The likelihood that we are not going to be able to provide the stock we need in the immediate to medium future will most probably see continued upward pressure on prices and rents.

“This is the ninth consecutive year of price growth and we now see Tasmania achieving prices on our property comparable to many major centres on the mainland.” 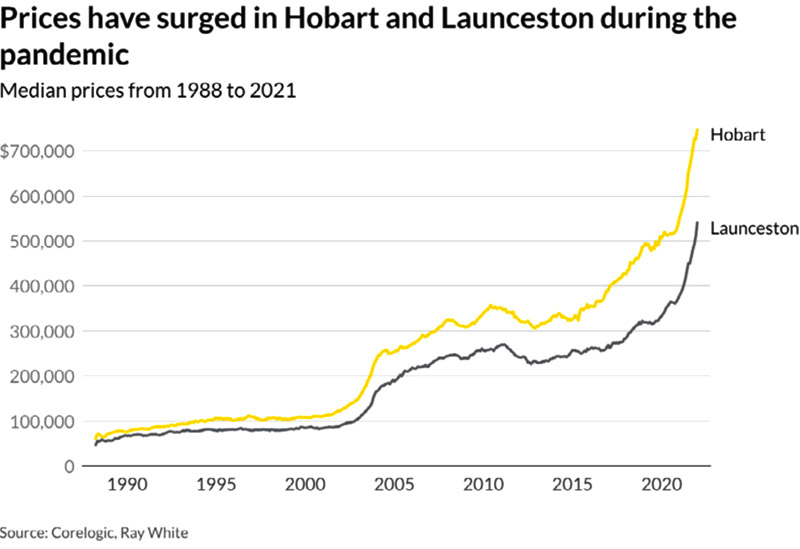 Mr Walsh noted that the price increases corresponded to “significant windfalls to the government in stamp duty and land tax revenues.”

He called on the government to channel these funds into alleviating the pressure for those experiencing housing stress, and to take the opportunity to reassess the operation of these substantial levies.

“These gains present an opportunity for the government to use these funds to assist the young and disadvantaged to not only put a roof over their head but to achieve the Australian dream of owning their own home,” Mr Walsh said.

“Given the significant increase in property prices over the past three years, now is an appropriate time for the government to review the significant impost it places on those seeking to buy a home or investment property.”

With vacancy rates at an historical low, rents on a three-bed home have increased $35 per week in Hobart, $50 in Launceston and $40 across the North-West Centres.

Investment yields continue to drop as rents fail to keep pace with property price increases. Yields have dropped from 4.7 per cent in Hobart, 5.4 per cent in Launceston and 5.6 per cent in The North-West in 2018 to 3.7 per cent, 4.1 per cent and 4.4 per cent respectively today.

The ability of Tasmania to minimise the COVID-19 threat and maintain strong and positive economic conditions has seen local real estate surge to record levels every year for nearly a decade.

Whether this is sustainable throughout 2022 will be dependent on a range of variables.

“With very strong rental growth, borders reopening and a continual shift in the drivers that shape the economy, high demand for property is set to continue,” he said.

“While the city’s median is a lot lower at just over $500,000, it’s therefore no surprise that the spotlight has now also shifted to Launceston.”

Launceston remains the investment capital of Tasmania, with 32 per cent of all sales being for investment purposes. The North-West and Hobart have 22 per cent and 19 per cent respectively.