5 min read
18-8-2021
Demand for Gold Coast apartments has been unprecedented so far in 2021. Photo: Alex Cimbal/Shutterstock

Data released by Colliers International showed apartment sales in the first quarter of 2021 were just $112 million shy of all sales in 2020, with 742 apartments sold between January and March.

The average sales price surged to $1.06 million, up more than 42 per cent over the last two years.

“This data gives us a clear understanding of the extent of the demand driving the local development industry and the signs are there that this level of activity could continue at least for the immediate near term,” he said

The southern Gold Coast was the buyer hotspot, accounting for 43 per cent of all sales between January and March, while 38 per cent of sales were racked up in the Central Gold Coast precinct, covering Southport, Surfers Paradise, Main Beach and Broadbeach.

Mr Higgins said it was the first time that southern beaches sales had eclipsed that of the central Gold Coast for two consecutive quarters.

However, he said he expected sales volumes to drop off due to a lack of new projects in the short to medium term.

“The demand is backed up by strong migration numbers, both interstate and intrastate, which sets the Gold Coast up for continued growth at least for the remainder of this year and into 2022.”

“Queensland is currently experiencing the highest rate of net interstate migration since 2007 and that is underpinning the market amid the pandemic,” Mr Higgins said.

“The difference between Queensland and the bigger states is that we don’t rely as much on international migration to support our construction industry, so it’s purely the big shift from interstate that is largely behind the activity we’re seeing at the moment.”

While facing challenges around the availability of construction trades and supply issues for building materials, developers continue to push forward with new projects to try to keep pace with demand.

One of the latest to move was Spyre Group, which this week lodged a development application for an 18-level luxury project in Main Beach, four weeks after selling out of its Coolangatta project Cala Dei.

Spyre Group’s Main Beach development will be highlighted by a pair of split-level, four-bedroom penthouses, while the entire building will comprise just 15 dwellings.

“Our latest project seeks to make a positive contribution to the locality of Main Beach, with its elevated architectural form providing an artistic reflection of the surrounding coastal environment” Spyre Group director Andrew Malouf said.

“Main Beach presents us with an exciting opportunity to leave our mark on a suburb that we feel is unparalleled in the high-rise multi-res development space.”

Hirsch & Faigen director Daniel Faigen said enquiry had already been strong for the project, on the heels of the developer selling out its first Gold Coast development, Hemingway in Palm Beach earlier this year.

“Kirra is unique in that it’s one of the only Gold Coast suburbs to have a beachfront facing true north, which brings with it an incredible opportunity to seize direct views across the ocean, the curvature of the coastline and the distant hinterland all at once – while providing sensational sunrises and sunsets,” Mr Faigen said.

The 15-storey tower, to be known as Greenwich, takes inspiration from New York City’s famous Flatiron building and will comprise 46 apartments.

The 20 Mary Avenue project will be another luxury offering, which executive director of KM Sales and Marketing, Jayde Pezet, said would likely grab the attention of the growing marketplace of affluent lifestyle seekers.

“With overseas borders shut, we are continuing to witness interstate buyers flock to the Gold Coast in pursuit of a tropical retreat,” he said.

“With the development set just moments from the beachfront, and the retail and dining options essentially at its doorstep, it will be the ultimate home for buyers seeking coastal convenience.”

Also making moves this month was Sherpa Property Group, which acquired two development sites on the north and south shores, pushing its forward pipeline past $250 million worth of projects.

“While we hold a deep affinity for the southern Gold Coast, we recognise there is incredible potential and value that lies further north on the central Gold Coast’s Broadwater precinct,” Mr Leet said.

Mr Leet said the company’s plan was to create a boutique collection of six whole floor residences and a two-level penthouse at the site.

On the south end of the coast, Sherpa bought a parcel of land at 949-953 Gold Coast Highway in southern Palm Beach.

The acquisition follows the developer selling more than $70 million worth of apartments in Palm Beach across two projects in the last 12 months.

Mr Leet said the new projects had a combined value of more than $100 million, adding to $150 million in developments under construction.

“It has been an absolutely sensational few months on the Gold Coast for Sherpa and the acquisition of these two landmark sites means we can continue this moment into bringing more of our signature luxury residences to life,” Mr Leet said. 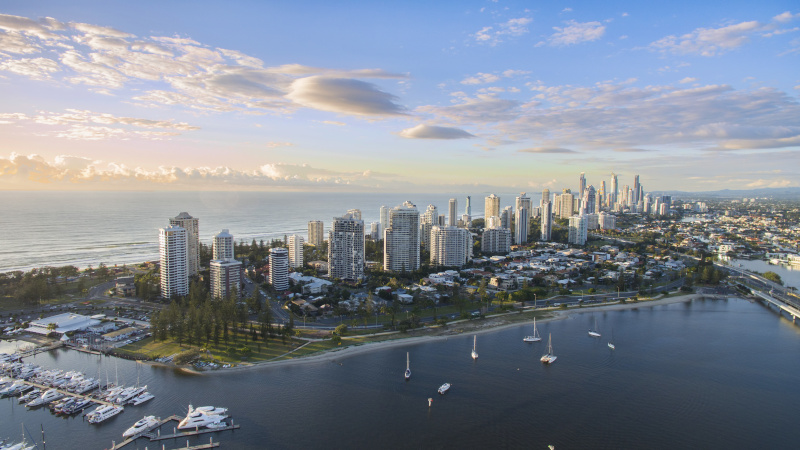 Gold Coast's Main Beach is in focus for developers as supply of sites gets tight on the southern Gold Coast. Photo: Spyre Group 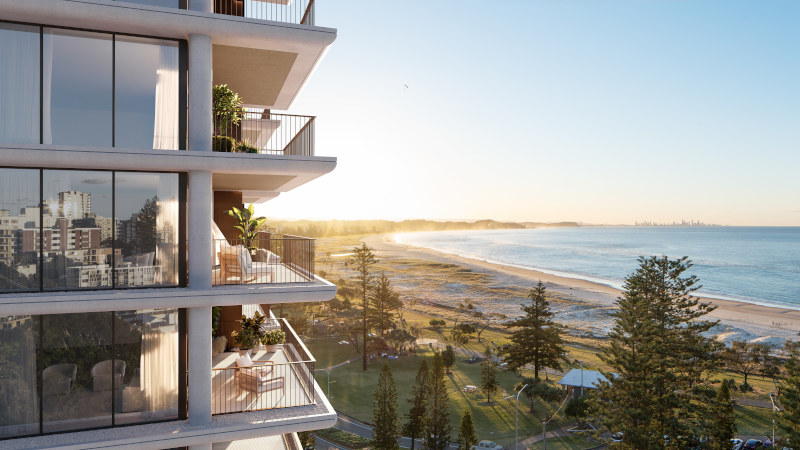