4 min read
22-7-2021
A billion-dollar revamp of The Gabba is set to drive significant price growth in its surrounding suburbs. Image: The Gabba

Brisbane’s 2032 Olympics win is likely to give the River City’s property market another boost, with experts saying it will likely sustain record-setting price growth for the next decade.

Brisbane’s 2032 Olympics win is likely to give the River City’s property market another boost, with experts saying it will likely sustain record-setting price growth for the next decade.

The International Olympic Committee announced Brisbane as the successful bidder for the 2032 Olympic and Paralympic games this week, with the win a culmination of a near-decade's worth of planning by the Queensland state government and the City of Brisbane.

Brisbane's property market is already booming, with CoreLogic data showing Brisbane’s median price for all dwellings rising by 13.2 per cent in the last 12 months and reaching an all-time high of $586,142 at the end of June.

And with the Olympics coming to town in 11 years, Ray White chief economist Nerida Conisbee said Brisbane was poised for a “golden decade of property prosperity”.

“Queensland is currently seeing the strongest population growth in Australia, with particularly high movement of people out of southern states to south east Queensland. This strong growth is expected to continue which will have widespread impacts across all price points,” Ms Conisbee said.

“Luxury property has been one of the strongest performers over the past 12 months in Australia. This has been driven by record low interest rates, high savings levels and most recently, a turbo charged economy.

“Business growth has also been particularly robust with many companies seeing their strongest conditions in many years.

“This has led to some particularly pronounced wealth effects across high income earning professionals and business owners, the main buyers of luxury property.”

Ms Conisbee said Brisbane’s momentum was massive, with the number of suburbs boasting at least a $1 million median price increasing by a third over the past 12 months.

“Our state has long been sought after for its world class beaches, sunny days and good climate but the lifestyle benefits will now be magnified. Now we can add into this mix infrastructure projects, population growth and the subsequent wage growth," Mr Andrew said.

“It is clear that Queensland is the place to be.

“The data has shown an uplift in pricing of 15 per cent during 2021, and we have no doubts that property will continue to climb off the back of this incredible news."

CoreLogic research director Tim Lawless, however, said he expected the flow-on effects to be gradual and centred around the significant infrastructure upgrades that will be associated with the Games.

Major projects to host Olympic competitions will be built from Brisbane to the Sunshine Coast, highlighted by a new indoor arena known as Brisbane Live, and a billion dollar upgrade to the Gabba.

“Large infrastructure projects tend to have a positive influence on housing prices, with the extra requirement for workers creating additional demand for housing during the construction process,” Mr Lawless said.

“Large projects also tend to leave a legacy of a permanent housing demand uplift, either through additional employment or via other benefits such as improved transport options and travel efficiencies related to transport infrastructure projects as well as additional amenity introduced to the area including social and retail outlets.”

Mr Lawless said investor opportunities would likely begin to emerge once more detail is known about the specific infrastructure upgrades, but said the obvious candidate for an uplift in demand was Woolloongabba and its surrounding suburbs.

“The proposed billion-dollar overhaul of The Gabba stadium is set to be the epicentre of Olympic activity” Mr Lawless said.

“Along with the Cross River Rail terminal and plaza, this precinct is likely to see a lift in desirability.

“The area is already popular with investors, with around two thirds of the housing stock in and around Woolloongabba being rented.

“The proximity of the Princess Alexandra Hospital and Mater Hospital provide a permanent level of localised housing demand, along with easy access to the Brisbane CBD, local universities and Southbank precincts.”

Mr Lawless said that lower price point, combined with upcoming capital investment on infrastructure, is likely to be a popular combination with investors and developers alike.

He said other suburbs in line for a lift would be Hamilton and Robina, where athlete villages have been  proposed, while the Gold Coast and Sunshine Coast will benefit from transport infrastructure upgrades.

Mr Koulizos said while the economic and property market impacts of the Olympics on host cities from Los Angeles in 1984 to Sydney in 2000 was closely linked to the scale of investment needed to host the games.

“Research on the London Olympics showed that areas close to Olympic facilities increased in value by two per cent to five per cent higher than other areas,” Mr Koulizos said.

“An investigation on the impact of the Sydney Olympics on the residential property market found that the markets of host suburbs experienced substantially higher growth during the bidding and pre-Olympic periods, but not after the Olympics were held.

“PIPA has conducted research into Sydney’s residential property prices pre- and post-Olympics that shows that from the time the announcement was made in September 1993 to the Olympics being held, Sydney was one of the best performing capital cities.

“However, post-Olympics, the rate of growth decreased significantly.” 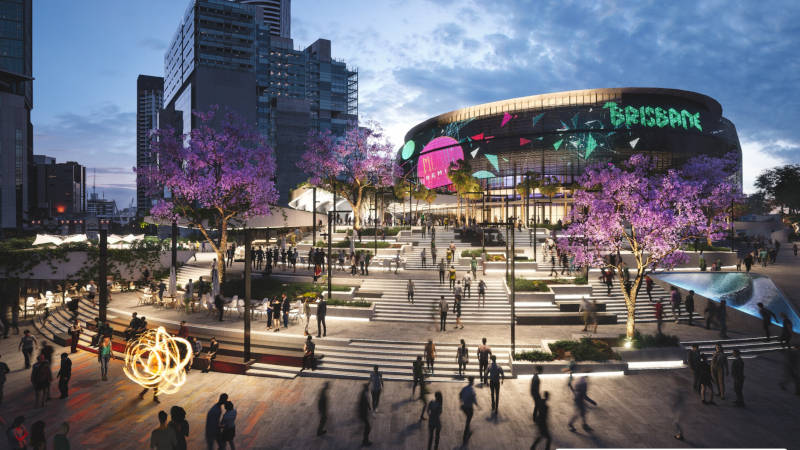 A concept image of the Brisbane Live precinct, which will complement a major upgrade of the city's rail network. Image: Cross River Rail