The globally acclaimed resort was acquired through Mr Forrest’s investment vehicle Tattarang, which holds property assets such as the Indiana Tea House at Perth’s Cottesloe Beach and a proposed Ningaloo Lighthouse Resort near Exmouth, in the north west of Western Australia.

Other property assets under the Tattarang umbrella include the historic Old Swan Brewery on Perth’s Swan River foreshore, which was converted into offices and apartments in the early 2000s, several parcels of farmland near Mount Barker, and several historic commercial buildings in Fremantle.

Mr Forrest’s Minderoo Pty Ltd is also the owner of a mansion in Sydney’s Point Piper, which was purchased for $16.3 million in 2018, as well as a significant number of apartments and houses in the resources hub of Port Hedland in WA.

The Gaia Retreat & Spa, which comprises 22 luxury rooms and suites, a restaurant and lounge area as well as retail facilities, will be part of Tattarang’s lifestyle division, which is known as Z1Z.

Tattarang director Nicola Forrest AO said the group would continue to build on Gaia’s global reputation for excellence in wellness and luxury.

“As custodians of truly unique Australian experiences, we understand and deeply respect the founding vision of Gaia which has transformed a wellness philosophy into one of Australia’s most celebrated destinations,” Mrs Forrest said.

“We are investing in and developing unique and meaningful places - places that have the capacity to enhance the health and wellbeing of individuals and communities.

“Tattarang’s business approach is holistic - it’s not just about investing in quality businesses, but ensuring sustainability and community benefit.”

Gaia was founded by Ms Newton-John and Warwick Evans, as well as business partners Gregg Cave and Ruth Kalnin in 2005.

Mr Cave said he believed the Forrests and the Tattarang group were the right custodians to take over the iconic resort.

“After 16 years we are excited to pass the baton to new visionaries to nurture and grow this majestic hinterland oasis - a place which has been so deeply embraced as a ‘home away from home’ for so many on their wellness and healing journey,” Ms Newton-John said.

Meanwhile, Sydney-headquartered Iris Capital has unveiled its plans for another iconic Australian resort, announcing a $100 million-plus transformation was in train for the Lasseters Hotel Casino in Alice Springs.

Iris Capital this week settled the $105 million acquisition of the resort, which it bought from its long-term previous owners, Singapore-listed Lasseters International Holdings.

The property comprises a 205-room InterContinental Hotel, the Alice Springs Convention Centre, 320 electronic gaming machines and a range of restaurants and bars.

Iris Capital chief executive Sam Arnaout said the redevelopment would include an expansion of the resort assets, a new hotel, an upgraded convention centre and a residential offering.

“We are well advanced in discussions with the Northern Territory government in relation to recapitalising the asset,” Mr Arnaout said.

“The investment is aimed at capturing pent-up demand for new domestic tourism destinations, as well as the international travel market, while also capitalising on the mining industry’s connection to the region.” 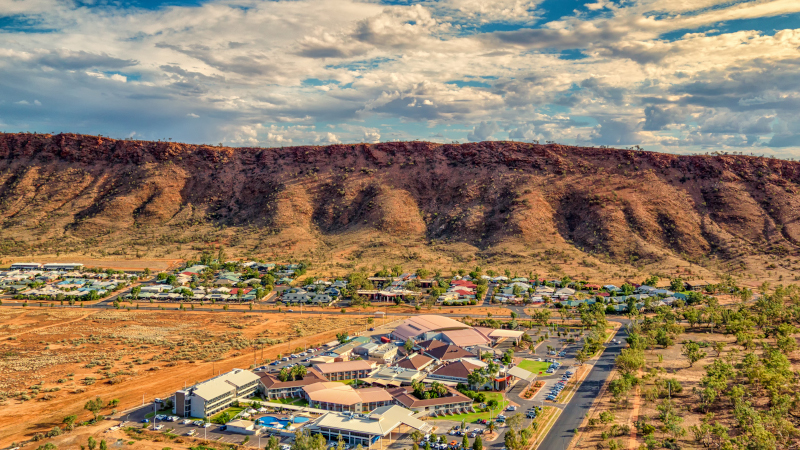 Iris Capital has a $100 million ambition to expand and upgrade the Lasseters Hotel Casino in Alice Springs. Photo: Iris Capital